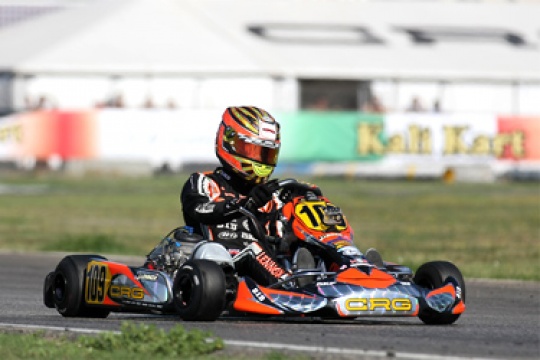 JORDON LENNOX-LAMB WINS A THRILLING FINAL IN THE KZ2 WORLD CUP ON THE INTERNATIONAL CIRCUIT NAPOLI OF SARNO. THONON CONFIRMS THAT THERE IS A SORT OF SPELL ON HIM WHENEVER HE TAKES PART IN THECIK-FIA CHAMPIONSHIPS. EXCELLENT FELICE TIENE. IN KZ1FORE' AND THONON'S HOPES ARE FRUSTRATED IN THE PRE-FINAL BECAUSE OF TECHNICAL HITCHES WHICH DENY THEM ANY POSSIBILITY OF SUCCESS.

Sarno (Salerno - Italy). Great victory the one achieved by CRG-Maxter in the CIK-FIA KZ2 World Cup thanks to the excellent performance of Jordon Lennox-Lamb on the International Circuit Napoli in Sarno. An excellent final result which awards the great job made by the CRG official team and the undisputable performance of the Maxter engine prepared by the technicians of the Italian factory.

A result which exalts the great skills of the young English driver, at his first year in KZ2, at the end of a season during which he has always been among the protagonists - he won this year's WSK Master and battled for the WSK Euro series until the end.

In the KZ1 World Cup, the four-time world champion Jonathan Thonon was defeated with honour by Bas Lammers, who had already won the 2010 World Cup.

The strong Belgian driver was slowed down in the pre-final by a banal hitch, but in the final he closed the gap and arrived in 7th, first among the CRG drivers and with thethird fastest lap time.

LENNOX WORLD CHAMPION IN KZ2. So, Jordon Lennox-Lamb is the new KZ2 World Champion. With his grit he managed to exalt the excellent qualities of the CRG chassis, the most winning in the gearbox category, and of the Maxter engine, prepared by the expert Italian technicians. On the circuit of Sarno, The English driver from Bedford had already made himself conspicuous during the qualifying heats; then he placed third in the pre-final behind Max Verstappen (CRG-Tm) and the New Zealander Daniel Bray (GP-Tm). Lennox took the lead of the race during the second lap, and from then onward he never left it. He arrived in first on the finishing line before the two DR drivers - the Norwegian Emil Antonsen and the Italian-German Riccardo Negro.

Max Verstappen was not on the podium in the race of his comeback with the CRG colours. In Sarno he won 4 heats out of 5, besides the pre-final. But in the final the Dutch driver of CRG-Holland was immediately involved in an accident after a duel for the leading position with Bray, and so he was forced to retire. Once again his participation in CIK-FIA races was 'cursed': he has never managed to win a title despite being always among the overall fastest drivers.

Also FeliceTiene would have deserved, like Verstappen, to be on the podium with Lennox: he was at his debut in a CIK-FIA KZ2 international race, and he was immediately very performing. But the Italian driver, on his CRG-Maxter, came in contactwith another driver during the pre-final: this accident jeopardized his final. He started from the 14th spot but, anyway, he managed to arrive in 8th, even recording the overall fastest lap.

Among the CRG private drivers, Alfredo Daniele Delli Compagni (Galiffa Team) got an excellent 7th place, while the Austrian Marcel Muller placed 9th. Luca Tilloca on Kalì-Kart - one of the CRG brands -  was forced to retire: he was stopped by an accident in the final after a promising 16th place in thepre-final.

In this category they ran also a final B, for those who did not manage to enter the final. This final B was won by the local driver Ciro Mollo on CRG assisted by Giambo.

CRG PROTAGONIST IN KZ1 TOO. In KZ1 only the final result was missed, for sure not the performance. The best CRG-Maxter driver was Jonathan Thonon, despite his dropping out in the pre-final for a leaking radiator. The reigning world champion, in the final, did his best and achieved a streak of very fast laps which allowed him to close the gap and arrive inseventh. The 'King' Thonon lost his crown, but with the honours of war.

Davide Forè was unlucky too. After the qualifying heats he seemed to have got what it takes to win his sixth world title. Unfortunately, the CRG-Maxter official driver was stopped in the pre-final by a clutch failure: he had to say goodbye to all the chances he stood to get a good result. In the final, from the 34th spot of the starting grid, he passed many of his rivals and arrived in 11th.

Also FabianFederer's race, on CRG-Maxter directly prepared by the factory, was good. The 2011 European Champion entered the top ten and placed 9th, both in the pre-final and in the final, always keeping the best drivers' pace.

Among the other CRG drivers, Sinan Van der Radd - CRG Holland - placed 18th, while the strong Jorrit Pex, reigning European champion, was really unlucky: he was slowed down during the heats by technical hitches which continued in the final, where he was eventually forced to retire. The same can be said for the Brazilian Gabriel Dias, retired in the final.

Euan Jeffery, CRG team manager: “We have closed the KZ season rather satisfactorily. We are really happy for the CIK-FIA KZ2 World Cup conquered by Jordon Lennox, with the Maxter engine prepared by our technician Filippo Zaggia. Jordon did a very beautiful race; he didn't make any mistake and exalted the qualities of our CRG chassis and Maxter engine. We are sorry for Max Verstappen, stopped by an accident right when he was battling for the victory. Also Felice Tiene did well; he even managed to record the fastest lap and to achieve a great recovery. It was a good weekend; many of our drivers performed well. In KZ1things were a bit tougher. We didn't manage to keep the title because of several troubles we had in the pre-final, both with Jonathan Thonon and with Davide Forè, even though they showed what they are capable of in the final. Good performance also for Fabian Federer, always very constant. For our Brazilain driver, Gabriel Dias, it was thefirst race in the world cup, where he managed to enter the final Anyway, weplayed a leading role in both the categories, getting one of the two titles, the KZ2 one. Our next appointments are in Zuera for the KF2-KF3 World Cup and the KF1 world championship in Macao.”

Jordon Lennox-Lamb (KZ2): “I expected to be fast, but I didn't expect to get such a beautiful success. Everything was simply awesome! Verstappen was very fast and I aimed at the podium right behind him. On thecontrary, I got the possibility to win and I grabbed it! Everything went smooth until the end. I'm very happy, I finished a perfect race. This is my first CIK-FIA international title. It's wonderful! I want to say thank you to Giancarlo Tinini, the CRG Group president, because he has believed in me, the technicians Filippo andRiccardo for the help they gave me this year. we worked hard during these last months to achieve this result. I say thank you also to Luca of Lucky Design for the new helmet he made for me for this race: it brought good luck!"

Felice Tiene (KZ2): “I'm satisfied for the weekend. I was at my first experience in an international race in KZ2, but it could have finished differently if I hadn't had a contact with another driver in the pre-final. I was always in the first positions, with three wins in the heats and a third place in the time trials. Then, in the final, I was really fast: I recorded the fastest lap and I'm really happy for it. Together with Lennox and Verstappen we were three CRG drivers who deserved to step onto the podium!”

Jonathan Thonon (KZ1): “We have won all the KZ1 World Cup we have taken part in since 2006, with the exception of 2010, when we didn't take part in that edition. I'm disappointed for the technical hitch we had in the pre-final. In the final, anyway, I was really fast and it is a shame, because I could have aim at victory this year too. I'm really happy for Lennox and for his KZ2 World Title: it was a great performance for the whole CRG Group!"

Davide Forè (KZ1): “Of course I'm really disappointed for the clutch failure in the pre-final: this problem prevented me from battling with the others in the final, where I had to start from the last spot. Unbelievable! I'm sure that both I and Jonathan could have achieved the result if we hadn't had all the problems we had. Anyway, I was really quick in the final, a great progression also in the last laps. I must say that after I got stopped in the pre-final I shed some tears because I was sure I couldhave achieved a great result: maybe not the victory, but the podium yes! For us, for CRG, there is the great satisfaction of Jordon Lennox-Lamb's victory with the Maxter engine prepared directly by the factory. It was a great result for all of us!"