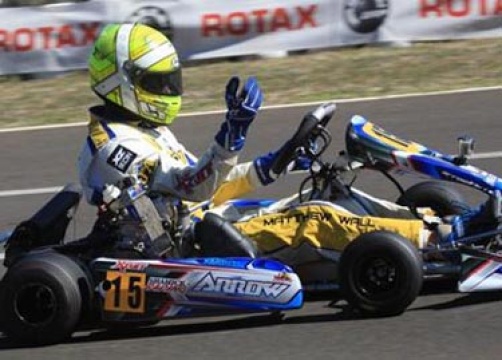 ﻿The new Arrow X2 kart has again shown the racing world that it is capable of winning across all forms of kart racing after claiming another National Title at the 2012 Australian Rotax Nationals. The X2 range of karts has now won four National Titles since its June release.


Rotax Heavy was the first title to be decided on the Sunday with both Brendan Nelson and Matt Wall locking out the front row of the grid. Matt Wall took wins throughout the heat races, with Brendan winning the Pre Final. In the Final Matt Wall took the honours into the first corner but Brendan fought back and regained the lead several times over the first ten laps. From Lap eleven to twenty Matt & Brendan raced nose to tail with some fantastic racing to gain a break away from the perusing pack. After Matt Wall claimed his 12th National title and 3rd Rotax crown with Brendan Nelson closely behind for an Arrow 1-2, Arrow karts proved again its dominance across the Rotax classes.

Rotax Light was the next championship to be decided and our hopes were high with twelve time National champion Deadly Dave Sera looking ominous to continue his and Arrow’s dominance of this class. Arrow would start the final with four X2 karts in the top 10 and as usual Deadly Dave won the race into the first corner. In the early laps the Arrow kart looked strong with Dave Sera in front, Joey Mawson and Nathan Tigani in the lead pack. A mid race incident unfortunately saw Dave Sera DNF which left Mawson and Tigani to fight for the victory. On the day the Arrow X2 can be proud of securing 2nd Joey Mawson, 5th Brock Plumb , 6th Nathan Tigani & 9th Bart Price in a hugely competitive world class field.

Deadly Dave Sera back in the seat since January proved his class yet again securing 2nd in Qualifying and winning his way to a front row start for the Final. Dave was aiming to secure his thirteenth National Title and potentially his seventh Rotax crown but not to be. Maybe 2013 ?
(photo courtesy of Coopers Photography)

In the highly competitive DD2 class Pacific Kartsport & Arrow driver Troy Bretherton finally broke through for a well-deserved second place. Troy has been in the top six throughout the Pro Tour and no better event to break through for a podium than the Rotax Nationals.

With the Junior Max final championship class on offer Arrow had two contenders that were strong all weekend but both drivers came together in the Pre Final which eliminated their hopes of victory. Jordan Boys from the CC Racing stable qualified third and had good pace throughout the heats and James Abela from Kart 1 qualified sixth but both came together fighting for third position in the Pre Final.

Drew Price Engineering and Arrow Karts would like to congratulate all the Arrow drivers and crew for a fantastic event and ongoing support. Arrow is now hunger for more success and will be looking to the following events for the remainder of this racing season.