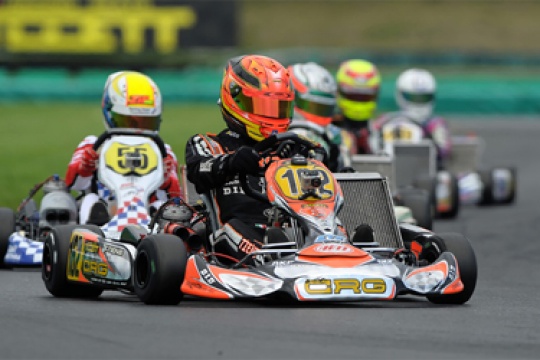 IN KF2 JORDON LENNOX-LAMB RUNS AGAIN AFTER HIS VICTORY IN THE KZ2 WORLD CUP. AMONG THE CANDIDATES FOR THE FINAL SUCCESS ALSO FELICE TIENE AND MAX VERSTAPPEN WITH CRG HOLLAND. IN KF3 ALEX PALOU IS AMONG THE MAJOR PROTAGONISTS, TOGETHER WITH VITOR BAPTISTA AND CLAMAN DEMELO.

Lonato del Garda (Brescia - Italy). CRG Official Team is ready to get on track for another important CIK-FIA appointment: the KF2 and KF3 World Cup in schedule in Spain, in Zuera, from 20th to 23rd September.

It is another occasion where the Italian manufacturer can show the competitiveness of itschassis after the successes achieved also this year, in a thrilling end of season which has as last appointment the last round of the KF1 World Championship in Macao on 21st October. In the meanwhile, in Spain, CRG fields all its best drivers aiming at winning the title in both the categories - KF2 and KF3.

IN KF2 LENNOX RUNS AGAIN. Jordon Lennox-Lamb runs again wearing the CRG's colours after spending a season in the gearbox category, the KZ2, which had its peak with the recent and wonderful success in Sarno (Italy) in the category World Cup.

Felice Tiene is running at Lennox's side: he was, too, a great interpreter in the gearbox category in the race of Sarno. Here he is at hiscomeback in KF2, where he has always been among the fastest as, for example, in this year's CIK-FIA European Championship, where he finished with a victory and a third place in the general ranking.

At the start, for CRG, also the Danish Nicolaj Moller Madsen and the French Ingrid Girard, the latter on a kart powered by Maxter; they are both ready to battle for the top positions. ForCRG, as private driver, also Giovanni Martinez.

VERSTAPPEN TRIES AGAIN TO PERFORM A FEAT. In Zuera everybody's attention will be focused also on Max Verstappen, who has just successfully come back behind the wheel of a CRG chassis for the CRG Holland Team. The young and fast Dutch driver has recently fallen victim to bad luck in two CIK-FIA events: the KF2 European Championship and the KZ2 World Cup, where - at his debut in the gearbox category - he had immediately shown his skills and his performing qualities. In Spain, in the KF2 World Cup, Verstappen is on a CRG-Tm and he openly aims at redeeming himself from the last unlucky performances and winning his first CIK-FIA title of an already brilliant career.

LH RACING TEAM. Also the LH Racing Team is participating with the performing LH chassis produced by CRG. The drivers running for the team are the English champion Tom Joyner, together with Igor Walilko, KasperLarsen and Johannes Heinoneen.

IN KF3 PALOU CANDIDATE FOR THE TITLE. In KF3 the hopes of the CRG Official Team are reposed in the runner-up of the European Championship of the category: the Spanish Alex Palou Montalbo. The Spaniard is mature to aim at success in a prestigious race such as the KF3 World Cup. Palou's season has been a crescendo and so far he has deservedly won the WSK Euro Series and placed second in the CIK-FIA European Championship. Of course he stands a good chance on his home circuit, where he has already had the opportunity - right in the WSK - to express himself at his best levels on his CRG chassis powered by Bmb.
In KF3, besides Palou, also the Brazilian Vitor Baptista and the Canadian Claman Demelo Zachary, both standing a good chance too. Among the CRG private drivers to be mentioned the Russian Georgy Antonov and the Spanish Luis Martinez Gonzales. 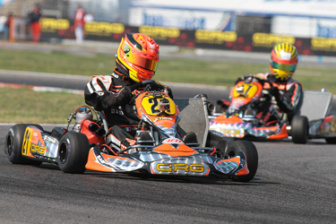 BITTER END FOR CRG IN THE KF1 WORLD CHAMPIONSHIP: THE RUNNER-­UP CUP TAKEN AWAY FROM FELICE TIENE. VERSTAPPEN OUT IN KF3