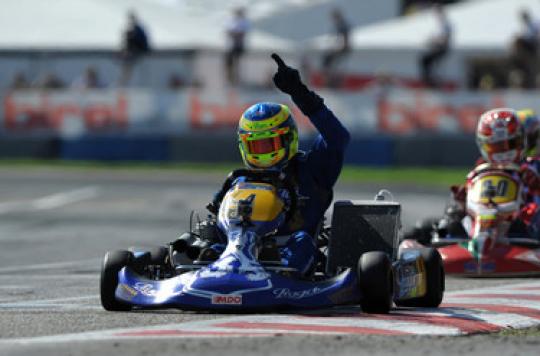 In the lead after the Qualifying Heats, and then winner of the Prefinal, Ben Hanley (ART GP-TM) never stopped repeating, “The only thing to matter is your position at the end of the Final”. So the spectators eagerly awaited a battle royal over the 18 laps of the ultimate explosive confrontation.

For some, hopes were reduced practically to nothing. Title-holder, the Belgian Jonathan Thonon (CRG-Maxter, victim of an engine failure resulting from overheating), his team-mate, and also a former winner, the Italian Davide Foré (CRG-Maxter, broken clutch) and the Frenchman Anthony Abbasse (Sodi-TM, broken wheel studs) had already lost any chance of standing on the top step of the podium during the Prefinal.

Thanks to a perfect start, Arnaud Kozlinski (PCR-TM) surprised pole-sitter Ben Hanley to take the lead as they made their first pass of the Parabolica. For two laps, the Frenchman led the dance, before Ben Hanley took back the lead in an incisive attack. But although it seemed that Ben Hanley would repeat his solo ride of the Prefinal, resistance was being organising behind the Briton. The Dutchman Bas Lammers (Praga-Parilla) also overtook Kozlinski to follow in the wake of the leader, whom he passed shortly before mid-race under braking for the Parabolica. Starting from 6th on the grid, Paolo De Conto (Birel-BMB) also succeeded in profiting from Hanley’s slipstream to overtake him, posting the fastest lap as he did so. Wheel to wheel, Lammers, De Conto and Hanley lapped at well over the average of 100 kph. Strategist to the end, Bas Lammers succeeded in closing all the doors to take his second World Cup. Paolo De Conto was three tenths behind and Ben Hanley just half a second from victory.

“It’s incredible to win this race for the second time,” said the Dutchman excitedly. “Two years ago, my first win came in difficult circumstances, because my father had just died. Exactly two years later, I win again and I am really extremely happy. With Praga, I am involved in a new team and this success proves that we have worked well.”

In a race as intense as that, second was also a great result. So Paolo De Conto was torn between disappointment and satisfaction. “I probably lost the World Cup in my second Qualifying Heat, when I had a puncture,” the Italian recalled. “That forced me to start from 13th in the Prefinal. I was able to climb back to 6th, but in the Final I was only 7th at the end of the first lap. In addition to that I made a small mistake in the last laps by touching a kerb. Bas took advantage to gain a few metres on me and I could no longer attack.”

On the lowest step of the podium, Ben Hanley also had a few regrets after winning all of his Qualifying Heats and the Prefinal. “On a weekend like this I know all too well that the only race that really counts is the last,” he explained. “I would have preferred to be 3rd in the Heats and the Prefinal and to win this one. But I have to congratulate Bas for his race! On the other hand, it is the first season for ART GP, in which I am very much involved, and this result is a positive for the future.”

After his excellent start, Arnaud Kozlinski just missed the podium, but was ahead of his compatriot Armand Convers (Kosmic-Vortex). Just outside the Top 5, the Czech Patrik Hajek (Praga-Parilla) added to the success of Praga, resisting the fight-back by Jonathan Thonon. Starting from 29th position, the Belgian kept overtaking and finished this World Cup in 7th place, ahead of the Italians Alessandro Giulietti (Praga-TM) and Fabian Federer (CRG-Maxter) and the Finn Simo Puhakka (PCR-TM). After abandoning in the Prefinal, Davide Foré (CRG-Maxter) climbed to 11th place.

Other candidates for a place of honour lost their chance to see the chequered flag. The Italians Marco Ardigo (Tony Kart-Vortex) and Roberto Toninelli (Birel-BMB) collided in the first bend, the Dutchman Jorrit Pex (CRG-TM) and the Belgian Rick Dreezen (Tony Kart-Vortex) had punctures and Anthony Abbasse had to withdraw again. So for these drivers their hopes are already for 2013!