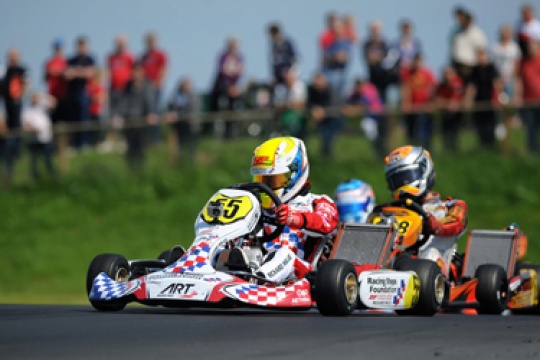 CIK-FIA World Cups for KF2 and KF3
Young Drivers will be in the limelight this weekend at Zuera, some thirty kilometres north of Saragossa, as the fast Spanish track will host the World Cups for KF2 (the Hopeful’s category) and KF3 (the Juniors). For these young Drivers full of ambition, winning this prestigious race can mark the starting point of a promising career. They will obviously all come with tiptop motivation!

A particularly broad and quick 1,700 metre long track (the maximum authorised length), such is the circuit waiting for the 183 Drivers entered in the World Cups for KF2 and KF3 to be held next weekend in Spain. The “Circuito Internacional Zuera” requires very smooth driving skills, an excellent engine and a perfectly set-up chassis. In order to claim victory in the World Cup, Drivers must therefore fit all the pieces of a puzzle which is always very hard to put together. And, in both categories, many of them are dreaming of crossing the finish line as the winner.

World Cup for KF2: Total uncertainty
Held over one single-event, the World Cup for KF2 will be a fine opportunity of revenging for the front-runners of the recent European Championship. After his European title won on a technicality the Briton Ben Barnicoat (ART GP-Parilla) will be very keen on going for a World Cup which would definitively make him play with the big boys who are the great international motor sport hopefuls. But he is not the only one who has this ambition. Last year’s winner of the World Cup for Juniors (in KF3), his Monegasque teammate Charles Leclerc (ART GP-Parilla) would not mind doing it again, but this time in the next category. Like the two ART GP teammates, Max Verstappen (who disposes here of CRG-TM equipment) is among the big favourites. As he missed out on the European Champion title under the abovementioned circumstances the Dutchman is craving for revenge!

The list of candidates for victory however includes many more men than these three. If we look carefully we can find approximately twenty Drivers who dream of turning this 23 September 2012 into a glorious day. The Italian Felice Tiene (CRG-BMB), who stepped on the European podium, is still chasing for a maiden major title. His compatriots Antonio Fuoco (Kosmic-Vortex), Flavio Camponeschi, Damiano Fioravanti (both on Tony Kart-Vortex) and Federico Savona (Top Kart-Parilla) will also be determined to fly the flag for Italy while on home ground, Spain’s Carlos Gil (Tony Kart-Vortex) and Pedro Hiltbrand (FA Kart-Vortex) should be real threats. An eye will also have to be kept on the Danes Nicklas Nielsen (Kosmic-Vortex) and Thomas Krebs (Maranello-TM), Britain’s Sam Snell (Energy-Parilla) or Norway’s Dennis Olsen (Energy-TM), who all ran at the front in the European competition. After his win in the World Cup for KZ2, the Brit Jordon Lennox Lamb will return to a direct-drive kart (a CRG-BMB) hoping to achieve this double which no one has ever done. In addition to the Dane Nicolaj Moller-Madsen (CRG-BMB), who makes a come-back after the European crown he donned in 2010, the U18 World Champion (under 18 years old) Matthew Graham (Zanardi-Parilla) also wants to land a second major title. Not forgetting Poland’s Karol Basz (Birel-BMB) and the Frenchman Anthoine Hubert (FK-Parilla), who are both fierce competitors also capable of treating themselves to this World Cup. The fight indeed promises to be very open and the public will be in for a fantastic thriller on Sunday at 15h35, the start time of a decisive Final… with quite an uncertain outcome!

World Cup for KF3: Everybody against Russell!
The only Driver who has achieved the feat of landing two back-to-back European crowns in KF3 is George Russell (Intrepid-Vortex), and he has not had enough! The Briton now dreams of winning the World Cup in this 13-15 year-old category and he can definitely be tipped as the big favourite. But in Karting nothing can be taken for granted. A large number of the hundred or so participants make no secret that their legitimate ambition is to win. In particular those who fought it out for the podiums in the four European Championship races, like the Spaniard Alex Palou (CRG-BMB), France’s Dorian Boccolacci (Intrepid-TM) or Croatia’s Martin Kodric (FA Kart-Vortex). Slightly less regular in both meetings of the European tour, others have shown how fast they were, and if everything fits together it can prove a determining factor in an event decided by a single-Final. The following names come to mind: the Italian Luca Corberi (Kosmic-Vortex), the American Santino Ferrucci (Energy-TM), the Brits Connor Jupp (FA Kart-Vortex), Callum Ilott and Daniel Ticktum (both using Zanardi-Parilla equipment) or Rumania’s Petru Florescu (Zanardi-Parilla) and Dionisios Marcu (Top Kart-TM). This Juniors’ category is however so indecisive –and the breeding ground of young talents so large – that a big surprise cannot be ruled out on Sunday afternoon after the decisive Final.

Scheduled for Friday afternoon, Qualifying Practice will prove very important for candidates to victory since it determines the starting grids of the different Qualifying Heats, after which there will be only 34 access tickets for the final phase (Prefinal and decisive Final) which will take place on Sunday. As is customary in Karting, spectacle and suspense should once again be some of the ingredients!