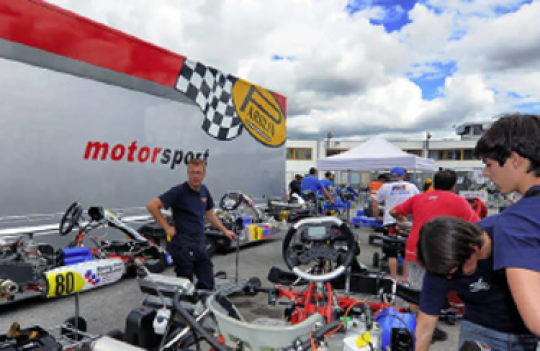 In 2009, when the CIK-FIA decided to launch a new single-type world championship formula, Parolin Racing Kart immediately got into it with its chassis, as well as engines manufactured by its subsidiary FIM Motors. Thanks to its recognised technological advance, Parolin was awarded a demanding tender and embarked upon the adventure of the U18 World Championship as exclusive engine supplier, and started cooperating with the Academy Trophy as supplier of chassis and engines. At the beginning of the third season of this unique challenge, the overall assessment for the Italian company is both positive and flattering.

Parolin has been one of the major actors in kart manufacturing since its establishment in 1986. Quality is its main priority and Parolin has manufactured chassis for many years now both under its own name and on behalf of other brands. Everybody remembers, among other things, the DC-One revolution, a particularly well-manufactured chassis produced in cooperation with Dino Chiesa.
Parolin’s reputation of seriousness and professionalism is widely recognised and established. For the Academy Trophy, Parolin offers a simple and effective chassis, kindly made available to entrants (whose numbers increase each year) coming from 36 countries all over the world. Manufacturing effective chassis of consistent quality in large numbers is not a problem for a company like Parolin, thanks to its cutting-edge equipment and flawless organisation. Universal  appreciation on the part of drivers highlights the balanced design of Parolin chassis, their versatility on all circuits and in all weather conditions as well as their easy set-up.

As for engine supply, the scale of the challenge is considerable. Whether it is the Academy Trophy or the U18 World Championship, FIM Motors must provide a complete fleet of ready-to-use engines, calibrated and tested for each race, without any need to change parts between meetings since they can resist for an entire season without any problem. In a meeting such as the one held in Braga, there were as many as 170 engines in working order crowding the racks of FIM track. Only 4 engines were replaced, each time for ignition problems, a trouble well known in KF that has nothing to do with FIM Motors manufacturing process whose reliability has been fully proven over the last two seasons.

The Parolin team is composed of 14 people, including 4 engine mechanics and 4 chassis engineers for the Academy Trophy, all accustomed to the rigorous organisation of the team and to the pressure of some competitors who believe that a new engine will put them straight into the lead of the race... At this level, there is perfect harmony with race officials and several CIK officials do not conceal their satisfaction at cooperating with Parolin. Other high-profile figures of the field declared their support for the formula and their appreciation for the Italian company’s products.
One of them is Terry Fullerton, an outstanding figure in karting, with unique experience, World Champion in 1973 and Ayrton Senna’s strongest rival: «I absolutely support the U18 and the Academy Trophy. Parolin chassis allow a genuine confrontation between drivers of all backgrounds. The reasonable budget of this competition is essential to allow drivers with less financial resources to show their talent and gain access to motor sport at top level. The F1 team Sahara Force India, with which I cooperate, understands the importance of this formula for its young drivers training programme».
Armando Filini, team manager of ART GP Karting, is equally pleased: «FIM single-type engines allow us to focus on chassis adjustments and enable us to promote our equipment in U18. Beating the competition while using the same engines is an excellent argument in favour of a brand!»
And finally, the Briton Henry Easthope - U18 winner - thanked the entire Parolin team present at Braga and dedicated his victory to them. 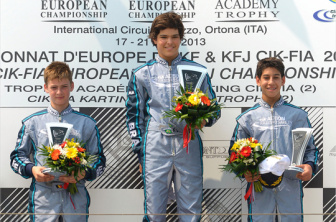 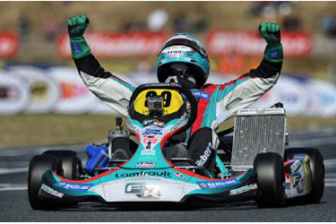