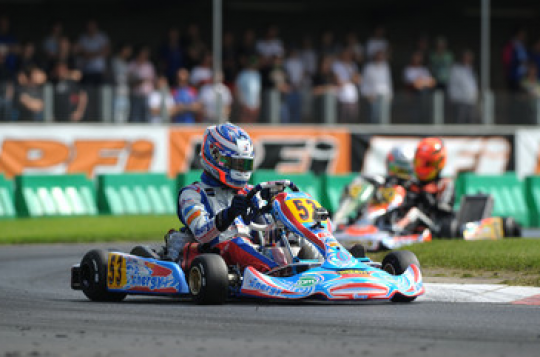 For some the dream is already over, but for others it may only just be starting. On the PF International Circuit at Brandon, the European KF2 and KF3 Championships have delivered their first verdict: the names of the 34 finalists in each category. On Sunday, the two Championship Races will see two much-coveted crowns awarded. Both spectacle and suspense are bound to be on the agenda!

On Saturday, spectators on the raised embankments of the PF International Circuit did not regret their choice of viewpoint, and not only because the sun was shining! With its bridge, its banked bend and numerous overtaking places, the British track was a perfect venue to guarantee some stunningly spectacular qualifying heats. And more than that, there was no lack of surprises during the 21 heats programmed for the KF2 and KF3 categories!

On the eve of the two Races attributing championship points, the vital concern of the favourites was to be among the 34 finalists. But those who best negotiate the qualifying heats, and who will therefore start the first Race from the front of the grid, will already have an advantage.

KF2: Olsen in pole, a hitch for the favourites
During the qualifying heats, the KF2 category was full of surprises. After Max Verstappen (Intrepid-TM), victim of a broken chain on Friday, several other favourites suffered more less severe complications. The Monegasque Charles Leclerc (ART GP-Parilla) was let down by his ignition, Anthoine Hubert (FK-TM) also had a broken chain and Ben Barnicoat (ART GP-Parilla) lost ground after a collision with Max Verstappen in the joint heat. Given a 10-second penalty, the Dutchman appealed the decision via his Entrant. As the appeal is suspensive, Max will start from 9th place on the grid for Race 1, behind his main rivals, Ben Barnicoat (6th) and Charles Leclerc (8th).

Avoiding trouble, Dennis Olsen (Energy-TM) did extremely well to take pole position. 5th in the Championship after his 3rd place in Race 2 in Germany, the Norwegian intends to play his hand to the very end. In the intermediate classification he leads the Italian Flavio Camponeschi (Tony Kart-Vortex), who climbed steadily from his 14th place in qualifying practice, the Briton Sam Snell (Energy-Parilla) and the Italians Antonio Fuoco (Tony Kart-Vortex) and Paolo Ippolito (Kosmic-Vortex). Ben Barnicoat will therefore start from 6th place on the grid, just ahead of his team mate Charles Leclerc. Between the two is the Dane Andreas Hanssen (Maranello-Maranello). Max Verstappen and the Briton Tom Joyner (LH-BMB) complete the Top 10.

KF3: Boccolacci and Kodric impressive
Already fastest in qualifying practice, during all the qualifying heats Martin Kodric (FA Kart-Vortex) confirmed his undeniable speed. Without a penalty for a jump-start, the Croatian would indeed have had a faultless run. However, Martin will start Race 1 from second place on the grid, but still with every chance of donning the crown as he is currently in 5th place in the Championship. Like Kodric, Dorian Boccolacci won 4 heats out of 5, only the Croatian succeeding in depriving him of victory when their two groups met. In the end however, it was the Frenchman, currently ex-aequo second in the competition, who will have the benefit of starting from pole position.

Behind this duo, the Britons took advantage of their local knowledge to stand out. In fact, Callum Ilott (Zanardi-Parilla) and Connor Jupp (Energy-Vortex) will start on the 2nd row of the grid, just ahead of the Italian Luca Corberi (Kosmic-Vortex) and their compatriots Samuel Oram-Jones (Intrepid-TM), George Russell (Intrepid-Vortex), Nathan Aston (Intrepid-TM) and Darius Karbaley (FA Kart-Vortex). Only 30th after practice, George Russell climbed as far as 7th place. Having won Race 1 in Varennes, the titular European Champion knows perfectly well that his poor performance in Race 2, when he was hit by an adversary at the start, may well be discounted. But with three results retained from four Races, it is vital that he fights at the front of the pack, with Kodric and Boccolacci. The same goes for Alex Palou (CRG-BMB), Championship leader. In 13th place after the qualifying heats, and therefore on the starting grid for Race 1, the Spaniard must climb through the pack if he is to take his first major title.