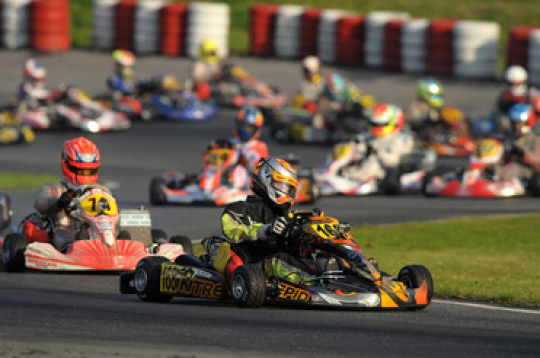 The European KF2 and KF3 Championships, which are henceforth held over 2 rounds, will be settled this weekend in Great Britain, at Brandon, on the PF International track. On a modified and lengthened circuit, in particular with the creation of a bridge, the granting of the European crowns in the Hopefuls’ category (KF2) and in the Juniors’ class (KF3) will be thrilling.

After the organisation of the North European Trophy in 2011, the PF International circuit is now preparing to host a fully-fledged European Championship. To be able to organise this major event the owners of the PF International circuit did not hesitate to carry out the necessary work, notably by extending the length of the track to 1,382 metres. In addition to the lengthening of the course, the creation of a bridge and of a banked up corner have brought to PF International a touch of originality which makes it a unique course. The Drivers who have had the opportunity to try the circuit in its new version all seem to appreciate it, and there should be a most intense spectacle in the county of Lincolnshire.

In their country which is ceaselessly revealing new talents year after year, the Brits are determined to take advantage of their knowledge of the venue to make the difference. Although they do not lead either of the Championships before this decisive meeting, with two races scheduled for Sunday and a total of 3 results retained (out of a maximum of 4), everything remains possible.

Fastest in both dry and rainy conditions at the first round of the European KF2 Championship, organised in Germany, Max Verstappen (Intrepid-TM) is tipped as the big favourite before the second and last event. With a second place and a win at Wackersdorf, the Dutchman has indeed put up an almost faultless performance, but a small mistake on the drenched track of the first race enabled Charles Leclerc (ART GP-Parilla) to be victorious as well, the Monegasque thus preserving all his Championship chances in spite of having a harder time in the second race. Max Verstappen will also have to beware of Benjamin Barnicoat (ART GP-Parilla). The young Briton, who achieved an incredible recovery during the German weekend, will perform on home ground. PF International is “his own” track! The protégé of the Racing Steps Foundation therefore seems in a position to fill the gap that currently separates him from the leader.

On the provisional podium, this trio of young Drivers who however are only in their maiden KF2 season (in this, the category of the so-called “Hopefuls”) will undoubtedly be tipped as favourites. Karting is however anything but an exact science! We have therefore probably not heard the last of the Dane Thomas Krebs (Maranello-TM) or of Norway’s Dennis Olsen (Energy-TM) who also both tasted the joys of the podium in Germany, or of the regular “Speedy”, aka Antonio Fuoco (Tony Kart-Vortex), currently 6th in the ranking.

The deletion of the least good result in the final count also allows other Drivers who have been unable to score in either of the German races to retain a small hope. Such is in particular the case of France’s Anthoine Hubert (FK-TM), Britain’s Tom Joyner (LH-BMB), Denmark’s Nicklas Nielsen (Kosmic-Vortex) or Poland’s Karol Basz (Birel-BMB). The latter competitors however know that they do not hold all the cards and that a possible feat also depends on a counter-performance of the favourites.

KF3: Palou, Russell and Boccolacci are the best placed

Over two months after its opening at Varennes-sur-Allier, the European KF3 Championship – the category of 13-15 year-olds – will give its verdict on Sunday in England. Having dominated the first race in France, Britain’s George Russell (Intrepid-Vortex) could have come to his home land as leader. But George was the unfortunate victim of a very eventful start in the second race and his tally thus remains at the 25 points of his initial win. So the Spaniard Alex Palou (CRG-BMB) did not let slip his chance and won Race 2, which has enabled him to take the reins of the competition. Will he be able to keep them until the end? Apart from Russell, the Spaniard will have to take account of the Frenchman Dorian Boccolacci (Intrepid-TM), who was also pushed out of the track in the second race in France whereas he had finished the first one right behind George Russell. These two Drivers will undoubtedly have a taste of revenge in their mouths…

The Romanian Dionisios Marcu (Top Kart-TM) and the Croatian Martin Kodric (FA Kart-Vortex), who were with it in Varennes-sur-Allier, want to confirm that their performance had nothing to do with luck. This is also true of the American Santino Ferrucci (Energy-TM) and of the Belgian Amaury Bonduel (Kosmic-Parilla), currently 6th and 8th in the Championship provisional classification as they constantly remained in the top 10 in France. It will also be worth keeping an eye on the Brits Daniel Ticktum (Zanardi-Parilla), currently 7th, Alex Gill (SWRD-Parilla) and Nathan Aston (Intrepid-TM). In the country of Queen Elisabeth II, the awarding of Karting’s European medals will therefore not lack suspense!