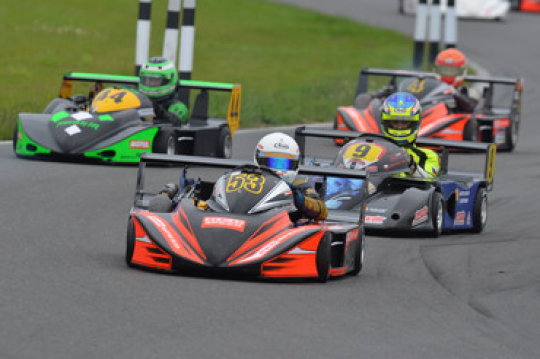 Lee Harpham (Anderson/FPE) dominated the second Round of the European Superkart Championship at Snetterton with two easy Race victories. He looked to be heading for pole position in the qualifying practice competition but defending Champion Emmanuel Vinuales (Anderson/DEA) secured pole late on. But this made no difference as in each Race it was Lee Harpham who was quicker away and into an early lead.

Chris Needham (Anderson/FPE) was another quick starter but went out of both Races from a front running position at a very early stage.

Damien Payart (Anderson/FPE) scored his first championship points of the season with a well deserved 3rd place in Race 1, but the wrong choice of tyre pressure gave him a big disadvantage in Race 2 and in the end he was satisfied with 6th place. The top three Drivers in last year’s Championship failed to shine. Emmanuel Vinuales went out of Race 1 at the half-way stage and German Daniel Hentschel (Anderson/DEA) went out on lap 8. Gavin Bennett (Anderson/EA) still looks below the level that took him to three Championships and last year’s vice-Championship but his 2nd place in Race 1 and 4th place in Race 2 leave him still in Championship contention. In Race 2 Emmanuel Vinuales drove into a very impressive 2nd place but, sadly, Daniel Hentschel failed to complete a lap.

The unexpected success story was undoubtedly Romano de Ruit (Anderson/FPE) who is in the best form of his life and thoroughly deserved 6th place in Race 1 and 5th place in Race 2.

Fellow Dutchman Marcel Maasmann (Anderson/FPE) lost places in Race 1 following contact with Adam Kout (MS Kart/DEA). Kout finished 4th whilst Maasmann had to battle back for 10th. However Maasmann was on the podium in 3rd place in Race 2 to maintain his Championship bid.

Adam Kout did not look as sharp as at Hockenheim and 7th in Race 2 was his lowest finish. Nevertheless he remains well placed in the Championship standings. Another Dutchman, Danny Bleek (MS Kart/VM), drove well for two 8th places. British Driver Liam Morley (Anderson/DEA) who was racing ICC and KZ2 classes recently had a magnificent 5th place in Race 1 but went out of Race 2 on lap 4.

It was good to see PVP/PVP team boss Poul V. Petersen sufficiently recovered from his broken leg to be present although with very restricted walking capability.

But the abiding memory of this event is of the dominance of Lee Harpham in this Championship. It was only a snapped chain that prevented a winning double at Hockenheim. There was no such misfortune here at Snetterton and next month he will go to Assen, in the Netherlands, as a hot favourite.