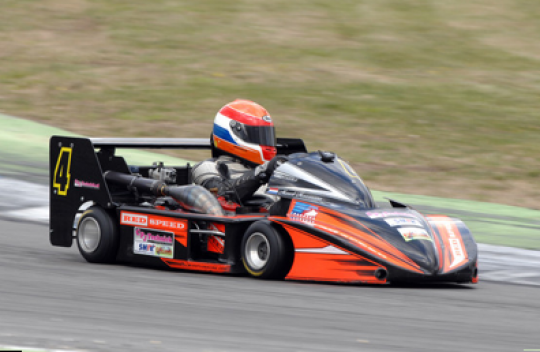 All of Europe’s top Superkart Drivers will be heading east towards Snetterton in England for the big Superkart event of the year on the weekend of 13-15 July 2012.

The Snetterton circuit becomes the third venue in Great Britain to host a CIK-FIA European Superkart Championship round following Donington Park (2002, 2003, 2004, and Silverstone 2010). Snetterton will also become the most easterly venue to have staged a round of this CIK-FIA Championship.

The “Flying Dutchman” Marcel Maasmann (Anderson/FPE) travels to the event as the Championship leader, following his first and second places in the opening two rounds at Hockenheim, Germany, in April. Whilst his “home” rounds are rounds 5 and 6 at Assen, Holland, next month, Marcel now drives for Redspeed, a British team, so he will not be short of support and back-up at Snetterton.

Yet it is from within his own team that he can expect a major challenge. For England’s Lee Harpham (also Anderson/FPE) Snetterton is a track on which he has raced many times, unlike most of the Drivers based in mainland Europe.

It was Harpham who beat Maasmann at Hockenheim, and the Englishman looked to be heading for an opening double in the 2012 CIK-FIA European Championship until a snapped chain, less than 2 laps from home, wrecked his victory chances.

But to concentrate only on the chances of these two Drivers would be a big mistake. Triple Champion Gavin Bennett had a disappointing Hockenheim event by his own high standards. Yet 5th and 6th places gained useful Championship points in the standings and you can guarantee that Bennett, who makes no secret of the fact that he wants “his” title back, will be fired up looking for victory on a circuit which, like Harpham, he knows well. Indeed, the long fast straights at Snetterton will demand a supremely fast engine, and Bennett’s DEA mounted on his state-of-the-art Anderson chassis has always delivered previously.

Nor should we discount the Drivers who failed to score any points at all at Hockenheim! Veteran German, Jurgen Reinke (Anderson/DEA) was fastest in qualifying practice in his homeland. It was only the fact that both Races were significantly affected by heavy rain that was his downfall. The same applies to former double European Champion Damien Payart of France (Anderson/FPE). After a year out of the sport, his return in Germany confirmed that all the old skills are still there and there was no lack of speed from the “family” FPE engine. Again, it was only the very wet conditions which forced him out of the two German races.

Other Drivers who were consistent in Hockenheim were Danes, Henrijk Lilja and Henrik Vejen, and Adam Kout from the Czech Republic. Kout stated that he feels just as comfortable in the wet or the dry conditions and his MS Kart/DEA performs well in both. Lilja and Vejen are also reaping the benefit of the improved performance of the PVP engine mounted on the PVP chassis.

Daniel Hentschel (Anderson/DEA) must not be overlooked. He was consistent all season in 2011 on his way to 3rd place in the Championship, and his 10th place in the opening Race in 2012 can be explained by lost places following another Driver coming into contact with him.
There are several Drivers who did not shine in Germany but who must not be written-off. These include Britain’s Carl Hulme (Anderson/FPE) who has a habit of recording a big-race win just when his form looks to have deserted him, and defending Champion Emmanuel Vinuales from France. With another three months getting more familiar with his DEA powered MS Kart, following last year’s Championship win on an Anderson, he may yet play a major part in the destination of the 2012 title.

Malcolm Crowe (Anderson/DEA) from the Channel Islands is vastly experienced at this level and has raced at Snetterton many times, whilst English newcomer Chris Needham (Anderson/FPE) was the recent winner of the major 2012 Superkart event in Northern Ireland, the UK Cup. Not only was he the winner, he broke the Bishopscourt circuit outright lap record previously held by Jonathan Rea, a world class Superbike Rider!