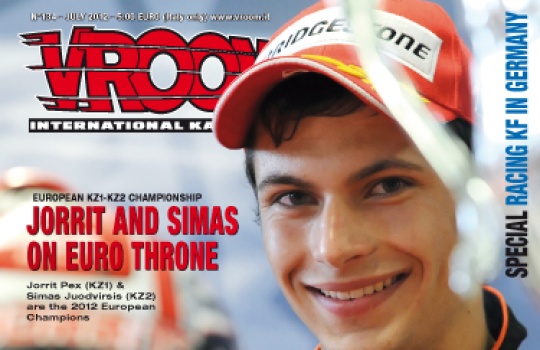 With Summer approaching in most European countries - well underway for the past month or so in Italy with temperatures as high as 34o C – this issue features some really hot stuff, starting with the European KZ Championships, which saw two newcomers on top of the podium. As well as all the month’s racing, Italcorse IT18 Deluxe Track Test is our exclusive technical feature. Also, we carry on our investigation on the state of KF racing across Europe visiting Germany; we interviewed Energy’s Michele Panigada, Toro Rosso F1 driver Jean Eric Vergne, and we present Sodikart W Series Grand Final in Paris.

FROM THE EDITOR
Vroom, digital edition
Digital good, paper too... quality is not an optional!

I remember Blade Runner yet again, a science fiction film from 1982 set in Los Angeles in the 21st century, when Harrison Ford tries to blow up, enlarge a photogram made from a print with a three dimensional intelligent scanner that responds to his orders until it pulls out a detail that wasn’t visible in the original picture. Today, technology is even more advanced than that of the quality of digital pictures. And to think it took so long to get it going, then after thirty years from the first prototype, still today digital hasn’t entirely taken over from traditional photography. First of all because this is deeply rooted in our culture and in the customs and habits of people and because there is a widespread service offered that satisfies the customers’ needs, but it is also because there is a business, it is from films that firms make their profit. One thing is sure though that this technology has developed lots of advantages that help communication, such as internet and the success of social networks. And this evolution has enriched the diffusion of general information thanks to Facebook, Twitter, and Youtube; just to mention a few of the most well-known. Now, thanks to some applications, invented by a genius, Steve Jobs, and thanks to the PDF format (Portable Document Format) by Adobe©, editors can show editorial work online without problems. An important solution that helps to present columns thanks to more space to work on and insert pictures and things such as videos. Therefore, also this reading, which was initially limited to the traditional Press, thanks to this new technology, changes into a multimedia vision, which is undoubtedly more interesting and exciting; it is also a solution to the problem recently seen where some tendencies have ended up leaving behind the traditional reader, he who loves reading books, daily newspapers or magazines and like many still tend to snob digital photography.
The world changes and we are all in one way or another called to change with it. Therefore Vroom too has at last created its digital offer for karting fans that have been with us for so long. Our aim is to respect our editorial policy that has always made our magazine stand out also for the digital format of Vroom. I hope our personalised articles for this platform satisfy your expectations and in a way they will surprise you too. Vroom magazine will continue to be published monthly because there are lots of readers who prefer the paper version, however, I can tell you that Vroom digital gives a wider panorama of our world only because there is a chance of having more space at a very low cost for an editorial business, which has to cover endless cost for publishing and distributing a magazine.
Furthermore, I take the opportunity to inform our readers that it is possible to download special articles that are dealt with in the magazine on this platform. We are really curious to see what results this new initiative dedicated to karting fans will have. So, don’t waste any more time and download Vroom application available on App Store and Google Play. Relax and enjoy it.

RACE REPORT – CIK-FIA World KZ1 Championship
Once again the Final was a great show. Lots of surprises, and excitement. Leader De Conto is out after a few laps; then Ardigò, moral winner... In the end, Pex who put up a brillant show takes top podium step; next to him Forè and a determined Kozlinski.

RACE REPORT – CIK-FIA World KZ2 Championship
The Lithuanian breaks through in the final phase... leaving only the scraps both on wet and dry track. Also on the podium, Di Martino completes Energy team  supremacy in the cadet KZ class

RACE REPORT – CIK-FIA European KF2 Championship Rnd.1
The Monegasque Charles Leclerc and the Dutch Max Verstappen share the spoils in Race 1 and 2. Who will manage to get in their way in the European final round?

RACE REPORT – CIK-FIA Viking Trophy for KF2, KF3, KZ2
The traditional CIK event reserved to Scandinavian drivers, with the recent addition of drivers from Russia and the Baltic states, registered an all-time low in its latest edition held on the circuit in Pori, Finland. What a pity for an event of such glorious history – it debuted back in 1990 - that saw the best Northern European drivers among its winners.

SPECIAL – Racing KF in Germany
We carry on our investigation on the state of KF racing at national level. Alarmed by plummeting numbers, 6 years after the introduction of the revolutionary KF concept, we analyse the situation nation by nation with the contribution of those who experience it day in day out. And despite how it might appear at first glance, with the German Championships fielding almost 50 drivers in each KF2 and KF3, the state of KF racing in Germany is not at all encouraging.

TRACK TEST – Italcorse IT18 Deluxe
The latest chassis made by Italcorse has a rather unusual steering wheel, one that makes all the other characteristics concerning main body drop back to a second level. We tested it ourselves at the track in Castelnuovo Berardenga together with the official DAM team owners the Mizzoni bros, Fabio Capocchiano from Italcorse Junior Team, and driver Roberto Manduchi, besides an evergreen Achille Parrilla.

TALKING TO – Michele Panigada
There seems just no stopping Energy winning streak in major international events. After grabbing yet another title in the European KZ2 Championship, the atom-branded team confirmed its world-class status, which places it among the top contenders to the World Cup for gearbox classes scheduled in Sarno on 2nd September. Energy’s top man Michele Panigada told us the secret behind his success.

CLOSE UP – Sodikart W Series
The super-final of the Sodi class for “evolutionary rental” has taken place at the woeful Racing Kart de Cormeilles circuit”, with fast races and the 500 mile endurance. Wins go to Sebastien Fournet and Swiss team 2. 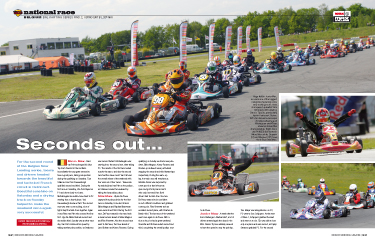 NATIONAL RACES
Our national races section starts with the second round of the BNL Karting Series held in Ostricourt; also, some electrifying racing from the German DMV Kart Championship in Kerpen; a very busy schedule for Polish karting; another big hit for the Portuguese national championship; the second round of USA SpringNationals, as well as Australia’s CIK Stars of Karting third round. 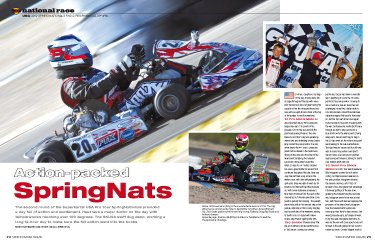 COLUMNS – Mondokart, August racing calendar, Last Page
CIK news always make the headlines, particularly at this time of uncertainty for the future of our sport. We report a few points coming out from the conversation we had with CIK Vice President Kees van de Grint in Wackersdorf during the European Championships. Starlane introduced a software update; ART Grand Prix unveiled the new chassis for Rotax categories; Tillett presented the new Grip Strips seat; Fernando Alonso new kart circuit in Oviedo completed; Jamie Alguersari tested the new Alpinestars suit in Lonato; Tony Kart mount RKS data acquisition systems; plus Trofeo delle Industrie entries to open on 20th September; CIK U18 tests in Italy, and much more.
Also find our usual section on national and international racing calendar for the month of August, featuring 40 national events from 17 countries around the world, plus 3 major international races.
Don’t miss our Last Page, hitting on the current FIA / Karting manufacturers meetings to decide the future of Karting.