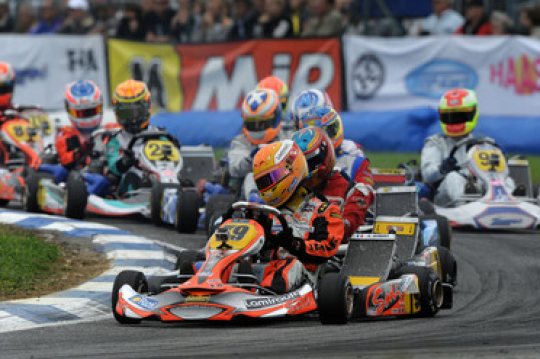 The CIK-FIA U18 World Championship and Academy Trophy will have their first event this weekend at Braga. Before heading for France (Angerville, 24-26 August) and then for Bahrain (8-10 November), the Portuguese stage will already give us indications on the strong competitors of this very promising 2012 crop.

Traditional stage of the CIK-FIA Championships, Braga will host the opening round of the U18 World Championship this weekend. For its third edition, this world competition reserved for Drivers under 18 years old keeps the format which has ensured its success to this day: maximum cost reduction, education of young Drivers through the Edukart programme and maximum equal opportunities for every competitor. This equity can be felt on the track, where each Driver tries to exploit at best the WKE engine supplied free of charge – further to a lottery – by FIM. It can also be seen in the paddock, where each Driver disposes of a tent with his name, identical to his opponents’ tents, which strongly contributes to the resulting very warm atmosphere, for both participants and spectators.

Generally speaking, the U18 World Championship is recognised for its capacity to reveal new talents, Drivers usually limited by financial means but who have found in this formula a very high-level competition which enables them to compete with their opponents on more or less equal terms, as while engines and tyres, supplied by LeCont, are the same for everyone, the Drivers have to choose their chassis from 17 brands competing for the “CIK-FIA World Champion Make” title.

Last year, the young Briton Matthew Graham thus killed two birds with one stone by landing the most important trophy of his young career and by offering a world crown to Zanardi. Now holder of the number 1, Matthew will throw in his title against competitors comprising some of the biggest Motor Sport hopefuls and Drivers who until now have seldom had the opportunity to run out of their home borders. In any case, with 24 nations and 4 continents represented, the competition confirms its world character!

Against Matthew Graham, the strongest contenders should in particular be France’s Anthoine Hubert (FK), third last year and quite keen on taking his revenge on the Brit. Amongst the other Drivers with at least one year’s experience, it will also be worth keeping an eye on the Dutchman Dave Blom (FK) and on Britain’s Henry Easthope, both in the final top 5 in 2011. The Dane Kasper Larsen (Zanardi) and the Italian Federico Savona (Top Kart) have also shown how fast they were and are therefore undoubtedly among the outsiders.

Although they may somewhat lack experience, the Monegasque Charles Leclerc, Britain’s Benjamin Barnicoat (both on ART GP chassis) and the Finn Juho Valtanen (PCR) are as well amid the favourites as they finished in the top three positions in the 2011 CIK-FIA Academy Trophy (with a win in the World Cup for KF3 for Charles). It is also interesting to note the arrival of Finland’s Niklas Tiihonen (Energy), winner in 2010 of this very Trophy. In a nut-shell, the competition promises to be superb and it is risky to make any forecasts!


Academy: 38 nations represented
Appeared on the CIK-FIA calendar at the same time as the U18 World Championship, the Academy Trophy repeats its major principles: reduced costs, education and equal opportunities for all. With, however, one difference: in the latter competition Drivers are invited by their National Sporting Authority (ASN), each ASN disposing of one or two complete karts placed at their disposal on a free basis by Parolin. Supplied by LeCont, the race tyres are also free of charge for the Drivers. For this third edition the 51 available karts represent 38 nations.

The Briton George Russell, a big name of the Junior category (KF3), will obviously be carefully watched by his fellow competitors. But the list of outsiders is particularly long and it is impossible to mention here all those who can claim a choice result in this Academy Trophy which will also welcome several female candidates, including the Swede Lina Von Schedvin, laureate of the selection organised by the FIA Women in Motor Sport Commission.