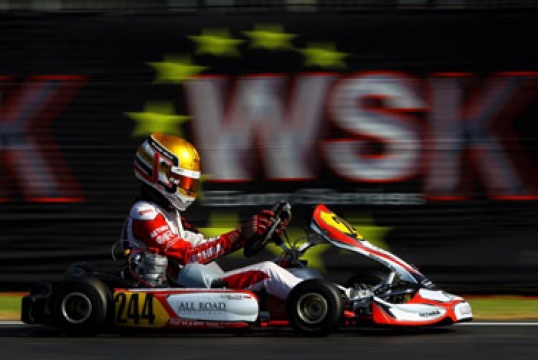 Last weekend, the WSK Euro Series hosted the Championship' third race out of
2012 at the La Conca International Circuit. For the Karting Division of ART Grand
Prix the weekend proved intense and ended with a positive second-place finish by
Charles Leclerc in the KF2 class. It has been a really valuable result for the
Monegasque driver, who will be lining-up for the last round at the Spanish Zuera
track with an huge 75-point advantage over his followers. A key step towards the
first goal set by ART Grand Prix and Leclerc himself.

In the KF2 class, Ben Barnicoat proved to be in great shape at La Conca. The
British racer, supported by the Racing Steps Foundation, was slowed down by an
engine issue while dominating his qualifying race by a wide margin. As a result, Ben
started from the back in the Final but the race's outcome proved really profitable.
Like Leclerc, Barnicoat showed great pace and managed to recover up to a 6thplace
finish. Thanks to his results, he kept his name into the top-10 also in the
Championship standings.

Regarding the KZ1 championship, the weekend has been conditioned by the
weather, as the heat caused a lot of tire issues, including carcass collapses that
literally led to some tire explosions. Ben Hanley suffered from this type of problem in
two heat races, so the Factory Team was forced to go for some more conservative
set-up solutions in an attempt to avoid reliability problems in the final. In the feature
race, Hanley started in 12th but recovered all the way up to 4th. He's now standing
in 4th place in points.

The heat also played a big role in the KF3 class, resulting a key element in the Final.
During the running of the qualification races, the rubber put on-track by the
participants created a massive tire groove forcing the drivers to tame the huge grip
of the Muro Leccese track with a "muscular" driving. The really young ART Grand
Prix drivers suffered from that situation compared to the more experienced ones. Olli
Peltola and Xia Yifan narrowly missed the access to the Final race but for them, as
well as for Takuya Okada, Sérgio Sette Camara and Simo Laaksonen, the lessons
learned were extremely important in terms of their professional growth.

The WSK Euro Series will be back on-track next time at the Zuera race course,
close to Zaragoza, from August 2 to 5. The Spanish round will be the last of the
2012 schedule.