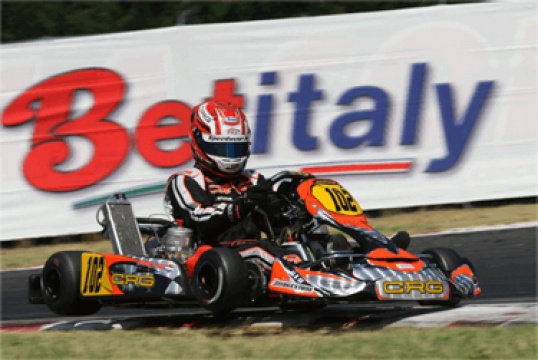 With a  second place in Final-1 and a win in Final-2 on Sunday, Pex took the lead of the championship right before the last race on 5th August in Zuera. On the other hand, Lennox was unlucky in the second KZ2 final, after his Saturday's win. Bad day also for Tiene in KF2 and Palou in KF3. Martinez is the runner-up of the Mini championship.

La Conca (Lecce-Italy). After the hot temperture on Friday and Saturday, which created lots of troubles especially to the tyres of the KZ1 category, the WSK Euro Series finals on Sunday in Muro Leccese took place in a slightly milder climate: the result was a less proibitive racing condition for this third round of the championship with 194 drivers at the start.

IN KZ1 PEX IS THE NEW LEADER. CRG official team played a leading role throughout the weekend in all the categories, even though, on Sunday, the colours of the Italian factory could be seen only on the highest step of the KZ1 podium, thanks to an excellent and quick as usual Jorrit Pex(in action in the top picture and on the podium in the one above). He is the new European champion of the categoy and he is now leading the WSK Euo Series championship thanks to the victoryachieved on Sunday in Final-2 and the second place in Final-1.

The 19 year old Pex was always among he overall quickest drivers and, also in this third round of the championship, he had the upper hand, achieving two positive results. On thefinishing line of Final 2, after taking the lead around mid race, Pex arrived in second behind Lammers, but the latter's disqualification for an overtaking with yellow flags, the first place went right to the young CRG driver. With only one race to go, (which will take place in Zuera next fifth August) Pex has got a 18 point lead over his closest pursuers.

In KZ1 things did not go well for the other CRG standard bearers, even though  Jonathan Thonon on CRG-Maxter managed to arrive in seventh in the second final, at the end of a weekend in crescendo with several good performances. Davide Forè was rather unlucky: he had to retire for troubles with the tyres and, eventually, he was disqualified for an overtaking with yellow flags just like Lammers and Ardigò. Tough weekend for Fabian Federer too, forced to retire for an accident with Dreezen. Good race for Andrea Dalè (CRG-Maxter), ninth after his eighth place on Saturday.

IN KZ2 AN ACIDENT STOPS LENNOX. In KZ2, after the awesome win of Jordon Lennox-Lamb in the first final on Saturday, the English driver on CRG powered by a Maxter engine directly prepared by the ItaIian factory, was really unlucky in the final on Sunday: he got involved in an accident at the second bend of the first lap. First he crashed onto Ghidella, then, when  he restarted,  onto Torsellini. Lennox, anyway, managed to finish the race and gather five points, besides the 35 gathered for his win on Saturday; he is now second, 32 points behind Negro, winner in Final 2. In this category there was the debut of the other CRG official driver, the Australian Tyler Greenbury on CRG-Maxter, who achieved a good seventh place in the second Final. In this race, the best CRG driver was Daniele Delli Compagni, of Galiffa Kart, fourth on the finishing line.

TIENE OUT IN KF2. In KF2 Felice Tiene was victim of bad luck; betrayed by a technical trouble which did not let him take part in the Prefinal, where he was supposed to be in the second row of the starting grid. That was a real shame for the Italian driver: on his CRG-Bmb he was among the best in all the heats until getting the fourth place after the qualifying phase. In the final, Tiene was incolved in a contact at the first lap and then he was forced to retire.

Better luck for Tom Joyner, on LH-Bmb, eighth in the Prefinal and fourth in the Final which was won by Fuoco before Leclerc and Camponeschi. The other CRG driver, Luke Varley, managed to qualify for the final phase where he achieved good performances, while Ingrid Girard missed the qualification for the skin of her teeth.  Because of this result, Tiene did not manage to reach the first positions of the ranking and he is now fourth with a 103 point gap from Leclerc. Joyner is sixth, 16 points behind Tiene.

IN KF3 PALOU IS STILL THE LEADER. Also in KF3 CRG did not achieve a good result because of Alex Palou's bad luck. The Spanish driver, on CRG-Bmb, placed second in the Prefinal behind Russell, but in the final, after a bad start, he slipped behind already at the first bend and then, at  the first hairpin bend, was obliged  to retire, thwarting all the good things he had achieved until then - he had been always among the top drivers throughout the whole weekend. Despite the zero he got in the final, Palou keeps the leadership of the ranking thanks to his 146 points, before Ilott with 131. Because of severalaccidents, the Canadian Claman Demelo missed the final despite his good performances.

IN THE  60 MINI MARTINEZ IS THE RUNNER UP. CRG could have gathered much more in the 60 Mini too. The Spanish Eliseo Martinez was fighting for the title in this second and last round of the championship: he could have already grabbed the title on Saturday if he had managed to keep the second place until the end, but with only two laps to go he overturned. He started from the 16th position in the final and, anyway, he tried hard to recover, achieving an awesome series of overtakings. He eventually arrived in sixth, while the winner was Leonardo Lorandi, who grabbed the title too, while Martinez was the runner up with a 20 point gap from the winner.

Last and final appointment of the WSK Euro Series on fifth August in Spain, in Zuera.

Euan Jeffery, CRG team manager: “In KF3 we had a week with constant results with Palou, always among the top drivers. Unfortunately, in the final, he had anaccident and had to retire. Demelo behaved well too, showing progress race after race. Unfortunately, In KF2 Tiene wasn't able to take part in the pre-final, and in the final, starting from the last position, he had a contact which forced him to retire. But our driver achieved good performances, and this bad luck was really unfair. Joyner did a very good race and got an excellent fourth place in the final. Varley too showed good progress, as well as Ingrid: even though she didn' t reach the final she performed really well in the heats. In KZ2, our Australian driver, at his debut in a European race and in the WSK, at the beginning had some troubles but then he felt more confident with hiskart and the competitiveness of our races. Lennox was very unlucky: his start wasn't good and then he had an accident at the first bend. That was really unfair. On the other hand, Pex won in KZ1 and he gained important points for the championship. In this category we had some troubles with the tyres, especially with Forè and Federer. Thonon, anyway, recovered quite well, achieving better and better results until the final where he placed seventh. It was really hard, both for the heat and the grip of the track."