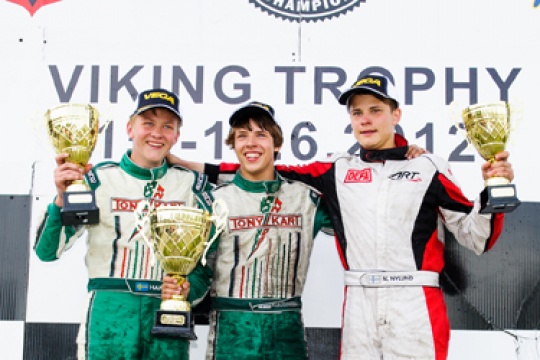 This is what people at the CIK must have thought when they saw the entry list of the 2012 Viking Trophy, held in Pori, Finland, the past weekend. Not only numbers continued to plummet compared to previous seasons – an abysmal 63 drivers spread in three categories – but also 67% were local drivers, with the usually large Danish delegation virtually absent - only 1 driver on KF2 starting grid.

Overall, only 6 nationalities were represented, with Russia making up the second largest group fielding 10 drivers – 5 in KF2 and KF3. The KZ2 gearbox category was unusually the least popular with 8 entries only – all Finns - while KF2 and KF3 saw 23 and 32 drivers respectively - 10 and 24 Finns respectively.
The other Scandinavian countries fielded a small delegation, with Norway represented by 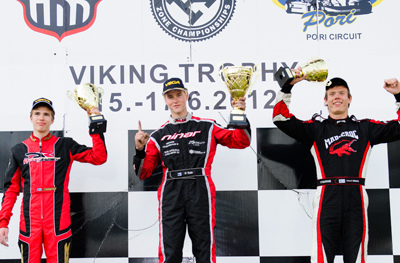 4 drivers in KF2 and 1 in KF3, and Sweden by 3 – 2 in KF2 and 1 in KF3. And from the Baltic states, only 2 Estonians took on the grids, one in each of the direct drive classes.
So, in light of such embarrassing numbers (way below CIK standards), the question – the same one we’ve been asking for the past couple of editions – is: what else does the CIK need to call it the day for the Viking Trophy?

The race
In KZ2, Henri Kokko left only the scraps to the rivals winning every single session, from qualifying to the heats, ending with prefinal and final win. Very good comeback for DR driver Leevi Suonpaa who started the prefinal in 4th to grab the runner-up spot in the final ahead of his fellow DR kart mate Henri Makila.

In KF2, Jussi Kuusiniemi took the pole and two heat wins, but a bad result in the 3rd forced him to start the prefinal from row 3 next to Art Grand Prix Ruuskanen. Row 1 start went to Mantyla and Hansson, with Karpov and Welin sitting on row 2. The prefinal saw the Russian Karpov beating Energy driver Mantyla for final pole start, with Kuusiniemi (fastest lap of the race with 46”426) and Ruuskanen conquering row 2. The final was quite exciting, as Karpov went away with the lead, followed by Ruuskanen, Hansson, Nylund and Kuusiniemi, the latter having the better of the lot by halfway through the race moving closer and closer to the leader. After setting another fastest lap (46”505), Kuusiniemi moved past Karpov for the lead, shortly after followed by Hansson and Nylund, as the Russian lost the position also to Ruuskanen. 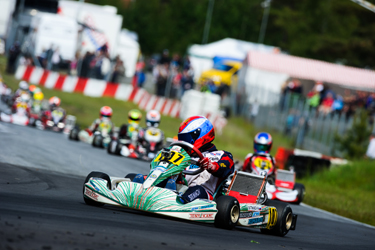 In KF3, Tuomas Haappalainen was on top after the heats, but it was Sitnikov from Russia to have stopped fastest time in qualifying. Niko Kaari joined him on front row for the prefinal, with Lappalainen and Laaksonen sitting on row 2. Despite having a good start, Haappalainen was forced to retire after 4 laps in the lead. Semi took advantage to grab the lead coming from P5, as Lappalainen secured 2nd after a tough battle with Moilanen and Laaksonen, with Sitnikov ending 5th while stopping fastest lap in the process (47”495). The final is quite lively, with Moilanen taking an early lead and Sitnikov shadowing him for half race distance, when he moved past him and ran with a 1”9 win. Moilanen had to settle for 2nd, with Stanishevskiy up from 9th in the prefinal winning the fight for 3rd.