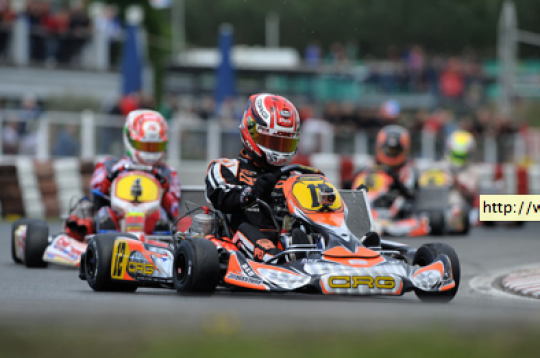 Again affected by changeable weather conditions, on Saturday at the European KZ1, KF2 and KZ2 Championships in Wackersdorf, Drivers’ nerves were again sorely tested. It was certainly a matter of combining a cool head and talent to be at ease under all conditions!

The Dutchman Jorrit Pex (KZ1) and the Czech Jan Midrla (KZ2) succeeded in avoiding all the pitfalls to take pole position in their category Prefinals whilst in KF2, in which there will be two Races, it will be Max Verstappen who starts in pole for the first battle.

The 34 Drivers in the KZ1 category were less affected by the wet than their colleagues in the KF2 and KZ2 classes. In fact, the three Qualifying Heats for the top category of karts with gearboxes were held on a dry track, with just a few drops in the last confrontation. With two wins out of three, Jorrit Pex (CRG-TM) put in the best performance over the day as a whole, thus taking pole position for the Prefinal, which itself will determine the starting grid for the decisive Final. But the young Dutch driver knows that he will have to be tough to beat some fine opponents. Arnaud Kozlinski (PCR-TM) will start alongside him on the first row and behind them will be the European KZ2 Champion Fabian Federer (CRG-Maxter), the four-time winner of the World Cup Jonathan Thonon (CRG-Maxter), up from his 13th place after practice, and the pole man and European Champion Paolo De Conto (Birel-BMB). Of the Top 5, Jorrit Pex is the youngest (at just 19 years of age), and also the only one not to have won a major international title.

But to reduce the list of potential winners to these 5 Drivers alone would be to make a grave error. In a Final where anyone could win, the Belgian Rick Dreezen (Tony Kart-Vortex), the Dutchman Bas Lammers (Praga-Parilla), who was only in 19th place after Qualifying Practice, his Czech team-mate Patrik Hajek (Praga-Parilla), the Italian Marco Ardigo (Tony Kart-Vortex) and the British Ben Hanley (ART GP-TM) have not yet had their last say. It will be more difficult for the former runner-up Yannick de Brabander (FK-TM), only 20th, and Armand Convers (Kosmic-Vortex), on the podium last year, 25th after being involved in two collisions.

KF2: Is Verstappen invincible?
Is Max Verstappen (Intrepid-TM) invincible in the KF2 category? During the Qualifying Heats, he certainly gave that impression to his adversaries. The very young Dutch competitor, son of the former Formula 1 driver, won his 6 Qualifying Heats, on each occasion with a comfortable lead. Whether the track was dry, damp or soaked, Max beat them all. So he will start in Pole Position for Race 1, scheduled for late Sunday morning. For the Dutchman as for his adversaries, it will be vital however to take a maximum number of points before returning to the PF International track, in Great Britain, the second and last meeting of the European competition.

But the game is far from over! Monaco’s Charles Leclerc (ART GP-Parilla) did no worse than 4th place in his Heats, so he will start on the front row. Only 53rd at the end of Practice, the Finnish Teemu Markus Petjoi (Tony Kart-Vortex) rose incredibly to 3rd position on the starting grid for Race 1. In particular, he got the better of the Czech Tereza Gromanova (Kosmic-Vortex), second in Practice, the British Tom Joyner (LH-BMB), the Finnish Niklas Tiihonen (Energy-Parilla), the Italian “Speedy”, alias Antonio Fuoco (Tony Kart-Vortex), the Danish Thomas Krebs (Maranello-TM), the Italian Felice Tiene (CRG-BMB) and the Norwegian Dennis Olsen (Energy-TM). Slated among the favourites, the Polish Karol Basz (Birel-BMB) and the Italian Flavio Camponeschi (Tony Kart-Vortex) will take the grid for the start of Race 1 in 11th and 12th positions, far from where expected.

It is impossible to close this account of the Qualifying Heats without highlighting the exploits of Benjamin Barnicoat (ART GP-Parilla). Disqualified in Qualifying Practice after an engine assembly error, the British Driver fought back from despair energetically. Starting in last position on the grid for his 6 Qualifying Heats and despite a technical problem as well as some jostling in the pack, the runner-up for the CIK-FIA Academy Trophy climbed from 106th to 22nd position in the intermediate Classification. On Sunday he could therefore seek to score points in the two Races before taking to the PF International track in Brandon (Great Britain) on 19 to 22 July next.

KZ2: Midrla confirmed
Already fastest in Qualifying Practice for the European KZ2 Championship, Jan Midrla (Birel-TM) showed incredible consistency at the head of the Qualifying Heats. In his 6 Heats, the Czech was always in the Top 3, hence his pole position for the Prefinal …

Other Drivers also set a great impression. Fast both in the dry and in the wet, the German Michele Di Martino (Energy-TM) won 3 Qualifying Heats after an 11th place in Qualifying Practice. So he took second place in the Intermediate Classification ahead of the Italian Flavio Sani (Birel-TM), second in Practice, the British Jordon Lennox-Lamb (CRG-Maxter), much improved from his earlier 24th place, and the Swede Douglas Lundberg (CKR-TM). Already in the Top 10 in Practice, the Swiss Kevin Gyr (Tony Kart-Vortex) and the Italian Marco Zanchetta (Energy-TM) confirmed their positions. Behind them, the Austrian Rene Oswald (Tony-Kart-Vortex) and the German Marcel Jeleniowski (Tony Kart-Vortex) improved their 33rd and 44th positions in Qualifying Practice. Completing the provisional Top 10 is Simas Juodvirsis (Energy-TM), defending his Lithuanian colours brilliantly.

Among the various performances in the Qualifying Heats, note should be taken of the 18th place of Ricardo Negro (DR-TM), who was a mere … 109th after Practice, as the result of a technical problem! No doubt the German will have dreams aplenty before tacking the Prefinal and the Final!