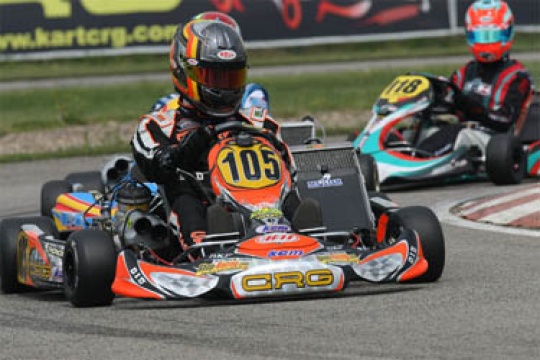 Lonato del Garda (Brescia - Italy). The weekend is going to be rather long and tough for CRG Official Team. In Wackersdorf, for the event which takes place from 6th to 10th June, CRG is taking part in the single round of  the KZ1 and KZ2 European Championships, besides the concurrent first round out of two of the KF2 European Championship.   There are 282 drivers for this CIK-FIA big event which has always had a record number of entrants.

CRG WITH ITS CHAMPIONS IN KZ1.  CRG takes part in the race with its cutting edge equipment and all its best drivers. In   KZ1 - with a total number of 38 entrants - CRG-Maxter Official Team fields the reigning world champion Jonathan Thonon, the 2011 KZ2 champion Fabian Federer - who won the Cadet European title last year right in Wackersdorf - and Davide Forè - world championship multiple winner -, who is in topphysical form and has recently won the last round of the KF1 World Champioship in Japan.

Jorrit Pex, one of the favourite drivers for the final success and winner of the recent WSK in France, is driving for CRG Holland.Together with him the Dutch  Sinan Van der Raad.

IN KZ2 21 DRIVERS WITH CRG. There are 21 drivers  for CRG in this event of the KZ2 European Championship: it is a further confirmation  of the high level of competitiveness of the CRG chassis. On the whole, there are 122 entrants in this category. The drivers racing for the CRG-Maxter official team are the English Jordon Lennox-Lamb and  Christian Hostert from Luxemburg; among the numerous drivers of CRG Holland also the Canadian Phillip Orcic and the Dutch Yard Pex, who performed very well last year too. Daniele Alfredo Delli Compagni of the Galiffa team stands good chances too. In KZ2 also the Kalì-Kart team - with their historical brand - with the two Italian drivers  Luca Tilloca and Franco Stinchelli racing on the chassis produced by CRG.

RACING ALSO FOR THE KF2 EUROPEAN CHAMPIONSHIP. Wackersdorf, besides the KZ1 and KZ2 European Championship, is also the venue for the first of the two rounds of the KF2 European Championship. The venue of the second round is in Brandon, Great Britain, on 22nd July. In this appointment, which has 122 entrants too, CRG fields Felice Tiene, who performed well in the KF1 World Championship in Japan, the English  Luke Varley and the French Ingrid Girard: all the three drivers are on karts powered by Bmb by KVS. Racing for CRG also the Finnish Kalle Merisalo on CRG-Parilla. With the team LH Racing the British Champion Tom Joyner, always among the most performing, together with the Finnish Johannes Heinonen and the Danish Christian Sorensen and Kasper Larsen. 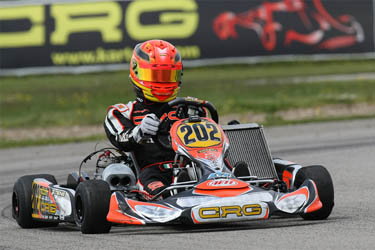 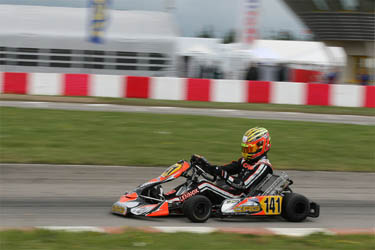