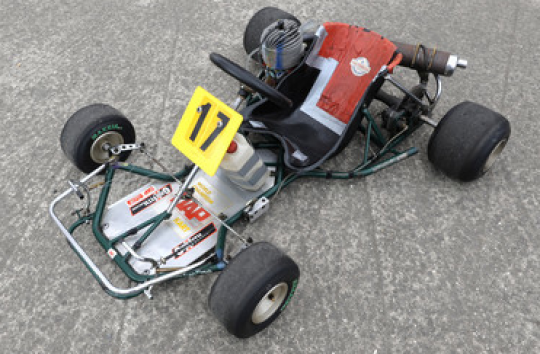 The famous Italian track of Jesolo had put on its Sunday best last weekend to celebrate in a dignified way the 50 years of the International Karting Commission, better known since under the name CIK-FIA.

In a meeting baptised “Coppa dei Campioni”, in memory of a mythical event of the 1970’s, the Pista Azzura hosted well over a hundred historical karts, the most ancient one dating from 1958 and the most recent from the early 90’s.
Karts from almost four decades could thus share the track in demonstrations which involved no competition whatsoever. Amongst the personalities present there was in particular Kees van de Grint, the Vice-President of the CIK-FIA, who did not hesitate to don his overalls and put in some hard work at the wheel of karts of different periods.

The entry list – which comprised enthusiasts from France, the Netherlands, Germany, Sweden, Britain and, of course, Italy – also included Alessandro Piccini, four-time World Champion in Formula C (gearbox karts) between 1987 and 1993.
But the real stars were the karts themselves, which went by the names of Silvercar, McCulloch, Landia, Dap, Tecno, Tony Kart, Birel, Robardie, Zip, PCR, Swiss-Hutless, CRG, Kali… to name but a few!From a symbolical viewpoint, the one which probably aroused the biggest emotion was undoubtedly the Dap-Dap driven at the time by a certain… Ayrton Senna da Silva, twice vice-World Karting Champion in 1979 and 1980.

« First of all, i need to thank our partner in the organisation ASI and the Jesolo Circuit to make this event possible. It was great to see so many people who wrote history during the 50th years of CIK existence. Especially our guest of honor, Mrs Buser, spouse of one of the former presidents. As a fan of historic machinery, it was a real pleasure to go around the paddock and watch the creations of individual manufacturers from the past. From the start of the official ceremony until the end of the event we had just smiling faces all around and this is how karting should be ». (Kees van de Grint, CIK-FIA Vice President)

Treat yourselves and go and see pictures of this fine moment of nostalgia in our “Media” section.