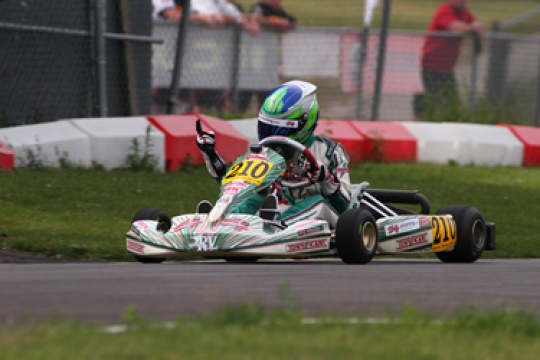 Mont-Saint-Hilaire, Quebec - June 1, 2012 - Taking on the Eastern Canadian Karting Championship (ECKC) season opener this past weekend at Goodwood Kartways, SH Karting drivers shined at the newly revamped Stouffville, Ontario facility. With an eight member-strong SH Karting team, along with five drivers under the SH Ontario (formerly GreenSpeed Karting) banner, the combination proved to be effective at the start of Canada's premier karting series. Red Deer, Alberta's Parker Thompson would head east to take on the ECKC action with the Mont-Saint-Hilaire-based Tony Kart team, and the rising talent emerged as the Saturday winner in a stacked Rotax Junior field.   A trio of Rotax Senior drivers was also impressive in Goodwood, as Steven Szigeti, Jesse Lazare and Austin Milwain were never out of the top-five in all official sessions during the weekend.

Leading the charge of the SH Karting branded Rotax Junior drivers was West Coast kid Parker Thompson. A recent winner in the Western Canadian Championships (WCC), Thompson was impressive all weekend long. Putting his SH/Tony Kart on pole position Saturday in Round #1, Thompson went on to sweep the day's action scoring the prefinal victory and the feature win, setting fast lap in the process. Sunday saw the hot shoe with a pole run in qualifying, only to miss out on the top spot by a scant 0.022 seconds. A third place finish in the prefinal led to Thompson just missing out on his second win of the weekend, as he finished the final just two-tenths back in second place. Thompson's stellar weekend has him leading the Rotax Junior point standings.

Tommy Lemaire Ouellet and Alexandre Couturier would join Thompson as Rotax Junior drivers under the SH Karting banner, with bad racing luck plaguing the two all weekend long. SH Ontario's Taegen Poles added some solid results to the SH effort, posting tenth and 11th place finishes in the two finals while Cameron Morrison and Jamie Lockwood both suffered injuries on Saturday, keeping them sidelined on Sunday. All five have potential for great things, and are sure to be back stronger at Round #3. 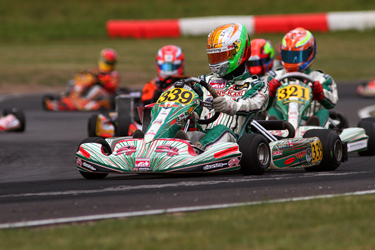 In Rotax Senior, the return of Jesse Lazare to the green machine had the paddock abuzz. Teaming with reigning Rotax Senior Canadian National Champion Steven Szigeti, the two were never outside the top-four all weekend long. Add in SH Ontario's Austin Milwain, and the front of the Rotax Senior class was consistently a blur of green. Szigeti led the team posting second in qualifying on Saturday, with Lazare in third and Milwain fifth. The prefinal race saw the three Tony Karts sweep the top three positions, with Szigeti taking the win by 0.217 seconds over Lazare, who was credited with fast lap in the race, with Milwain third. Jumping to the lead at the start of the first final of the 2012 ECKC season, Lazare held the point until getting shuffled back by lap nine. Lazare ended the 20-lap feature in fourth, with Milwain right behind, while Szigeti was able to secure the second place on the podium. Marc-André Lévesque also posted an impressive result Saturday, coming home right behind Milwain in sixth.

Round #2 action again saw Szigeti claim the second fastest lap in qualifying. Despite dropping back to fourth in the prefinal race, Szigeti's Tony Kart was dialed in, earning fast lap honours. Lazare bettered his teammate with his third place finish, but the two would swap spots in the day's final. Coming home second to earn his second podium finish of the weekend, Szigeti was joined on the podium with Lazare, as his third place finish was his first podium result in his return to SH Karting. Milwain ended his Goodwood campaign with solid fifth place results across the board on Sunday.

SH Karting's Maxime Couturier added a strong 11th place finish on Sunday in Rotax Senior, while SH Ontario's and Senior rookie Arika White posted a top-15 result Saturday as she continues to learn the ropes in the ultra-competitive class. Alexandre Lacroix was the lone Mini Max driver for SH Karting. A strong fourth place finish in Saturday's final was the highlight for the recent Coupe du Quebec winner.

SH Karting will next host the second round of the Coupe du Quebec series this Sunday, June 3, at their facility in Saint-Hilaire. The Eastern Canadian Karting Championship will resume June 17 at Circuit ICAR for Round #3.

SH Karting is the exclusive Canadian importer of Tony Kart and Kosmic kart chassis, as well as Vortex and ROK engines. In addition, SH Karting offers a selection of specialized products for recreational and competitive karting including Rotax, Sparco, Bridgestone, Alfano and Tillett. For more information on SH Karting, please call 450.584.3843 or toll free 1.866.584.3843, email  orders@shkarting.com or visit them online at www.shkarting.com.