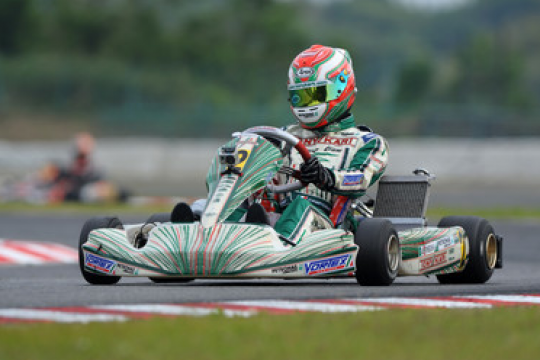 By winning the first two Races of the World KF1 Championship on Saturday at the Suzuka circuit, the Italian Flavio Camponeschi (Tony Kart-Vortex) has already clearly stated his ambitions for the world title. Twice second, the Japanese driver Daiki Sasaki (Kosmic-Vortex) thrilled his local supporters with his fine performances while the Polish driver Karol Basz (Birel-BMB) and the Italian Felice Tiene (CRG-BMB) also stepped onto the podium.

This Saturday the World KF1 Championship got off to a great start in Japan, the land of the rising sun. Although that sun gradually gave way to clouds, the Suzuka track remained dry for this first day of racing.

Already fastest in Friday’s non-qualifying practice, Daiki Sasaki (Kosmic-Vortex) straight away confirmed that he was a force to be reckoned with by his fastest lap in qualifying in front of the Spanish driver Pedro Hiltbrand (FA Kart-Vortex), Poland’s Karol Basz (Birel-BMB), the Italian Flavio Camponeschi (Tony Kart-Vortex) and Max Verstappen (Intrepid-TM) from the Netherlands.

The three qualifying heats (two per driver) saw changes on the leader board, particularly for Daiki Sasaki and Max Verstappen, both involved in a collision, and also Pedro Hiltbrand, who suffered mechanical failure. So it was Flavio Camponeschi who took pole position for Race 1 in front of the British driver Tom Joyner (LH-BMB), Karol Basz and the Italians Felice Tiene and Davide Foré (both CRG-BMB).

Flavio Camponeschi hardly gave a moment’s suspense in the first of the weekend’s four Races. Although Tom Joyner made the best start, the Italian attacked on the first lap to recover the lead and then never relinquished it. Behind him, several drivers contested second place, but it was Daiki Sasaki who took it. With the fastest lap and a climb through the field from 12th place on the grid, the Japanese driver for the Kosmic team represented his country with flying colours, superbly overtaking Karol Basz at the end of the race.

For the bottom step of the podium, Felice Tiene and Davide Foré crossed the finishing line side by side, but it was the younger of the two who took the points, by 21 thousandths of a second. Their team mate Jordon Lennox-Lamb (CRG-BMB) finished sixth in front of Tom Joyner (LH-BMB), slowly entering the ranks, the Indonesian Philo Paz Patric Armand (Kosmic-Vortex) and the French drivers Arnaud Kozlinski and Anthoine Hubert (FK-TM).

The scenario for the second Race of the day was practically identical to the first, at least for the winner. Behind Daiki Sasaki for a brief time, Flavio Camponeschi very quickly took the lead and soared to his second consecutive victory. But behind the leader there was no lack of excitement. A collision on the first bend in fact involved a good dozen drivers including former World Champion Arnaud Kozlinski (PCR-TM), Davide Foré, Anthoine Hubert, Philo Paz Patric Armand, the Czech Tereza Gromanova (Kosmic-Vortex) and the Belgian Yannick de Brabander (FK-TM).

Once he had yielded to the attack by Flavio Camponeschi, Daiki Sasaki made a minor error and fell back to 7th position, but he is not the type to succumb easily. With a number of brilliant overtaking manoeuvres, he succeeded once again in taking the points for second place. For the bottom step on the podium, Felice Tiene withheld the attack by the Dutch driver Max Verstappen, only 31st after qualifying and 13th in the first race (his grid position for the second race).

After crossing swords with Karol Basz, who lost a great deal of time in the process, Jordon Lennox Lamb improved on his classification in the first race to complete the top 5. He led the Japanese drivers Kenta Yamashita (CRG-BMB), Takashi Kasai (Tony Kart-Vortex), the Spaniard Pedro Hiltbrand (FA Kart/Vortex) and two more Japanese, Hiroshi Umegaki (Birel-BMB) and Takeharu Nakamori (DR-BMB). With five of their compatriots in the first ten (however this classification had not yet been made official on Saturday evening, as several on-track moves were still under investigation), the Japanese spectators have every reason to celebrate, and to hope that one of them ends up a winner on Sunday, when the race programme will be the same: qualifying practice, three qualifying heats and two Races in the afternoon.

Asia-Pacific KF2 Championship: Rossel and Ippolito in the lead

Organised in parallel with the World KF1 Championship, the Asia-Pacific KF2 Championship is currently dominated by… Europeans! The Danish driver Kevin Rossel (Birel-BMB) was the fastest in practice before winning the first qualifying heat. Second heat went to the Italian Paolo Ippolito (Kosmic-Vortex) while the Argentine driver Federico Panetta (Tony Kart-Vortex) finished second twice. On Sunday a last qualifying heat and a Prefinal will determine the grid for the Final, the only race to decide the title.

Find all the information on the World KF1 Championship and the Asia-Pacific KF2 Championship via http://www.cikfia.com/competitions/cik-calendar/2012/suzuka/event-guide.html