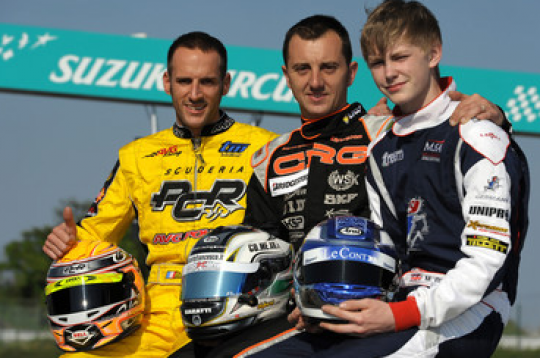 Over two days, the 35 drivers competing in the World KF1 Championship have been preparing for the first round of the 2012 season. On the fast Suzuka circuit, each of them has been trying to find the best set-up before tackling the two days of racing.

Between professional drivers and young pretenders, and also between Europeans and Asians, the battle is shaping up to be a tough one! In the pack are three drivers looking for another world title: Davide Foré, Arnaud Kozlinski and Matthew Graham.

Venue for the first meeting of the CIK-FIA World KF1 Championship is Suzuka, a circuit steeped in history. Everyone remembers the close of the Formula 1 Grand Prix so critical in deciding the World Champion. A stone’s throw from the famous motor racing circuit, this year celebrating its fiftieth anniversary, the Suzuka kart track is welcoming the world of karting for a second time. But whilst the Japanese track was the scene for the crowning ceremony last year, this time it opens what promises to be a hard-fought 2012 season.

Although Nyck De Vries has moved up to cars, there will still be three former World Champions on the grid: the Italian Davide Foré, who took four titles between 1998 and 2006, the Frenchman Arnaud Kozlinski, crowned in 2009, and the young British driver Matthew Graham, U18 World Champion (for under-18s) in 2011.

“I’m delighted to be fighting for a world title once again,” smiles Davide Foré (CRG-BMB). “I’m really very motivated… but it’s bound to be extremely tight and there are a great many prospective winners!”

That observation is shared by Arnaud Kozlinski (PCR-TM), pleased to be back at a circuit on which he has often been victorious. “Every time I come here, I end up on the podium,” the French driver recalls. “I can’t really explain why, but I love the atmosphere at the Asian circuits. In addition, the Suzuka track is great: it’s big, fast, safe … a real treat for drivers!”

After his victory last year in the U18 World Championship, this year Matthew Graham (Zanardi-Parilla) will be discovering what it is like to compete at the highest level of international karting. “Unfortunately, we have not had a lot of success since we came here,” the British 16-year old sighs. “We’ve had an accumulation of technical problems and we’ve not been bale to prepare as well as we would have liked … but I’m ready to give it my best shot!”

With four races on the programme (two on Saturday and two on Sunday), Matthew will have an opportunity to cross swords with the other two World Champions, as well as a large field of promising young European and Asian drivers. Recording the best time during the two days of free practice, the Japanese driver Daiki Sasaki (Kosmic-Vortex) has already announced his ambition. “It’s something very special to fight for the World Championship here, in Japan,” whispers last year’s winner of the Asia-Pacific KF1 Championship at the Macao circuit. “Suzuka is my preferred circuit and I feel very much at ease here. So I hope to be fighting for victory from tomorrow.”

Two other young drivers caused something of a stir in free practice: in fact Christian Sorensen (LH-BMB) from Denmark and Max Verstappen (Intrepid-TM) from the Netherlands were only a fraction of a second behind the Japanese driver. In brief, the suspense should be considerable from Saturday morning qualifying.

Suzuka is also venue for the Asia-Pacific KF2 Championship, which will be fought at a single meeting. So the final, scheduled for Sunday afternoon, will be decisive. On Saturday the 30 drivers involved will be at the heart of the action in qualifying and the first rounds proper.


Find all the information on the World KF1 Championship and the Asia-Pacific KF2 Championship via the link http://www.cikfia.com/competitions/cik-calendar/2012/suzuka/event-guide.html