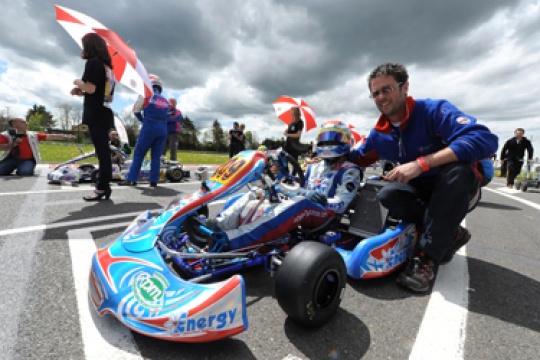 The international calendar has seldom been so busy at the beginning of the season. Races have followed one after another at a neck-break pace: the WSK, the great Italian classic races and then the start of the CIK/FIA Championships.

Always very well organised and structured, the Energy Corse Team has perfectly managed this series of meetings. At each new event, the team managed by Michele Panigada has shown its great kart preparation skills, which have allowed drivers to show excellent performances on international circuits, behind the wheel of their Energy chassis. And again, the results achieved have been very satisfactory, both in KF and in KZ...

KZ2: Juodvirsis Wins at Sarno
The Lithuanian driver Simas Juodvirsis has joined the WSK paddock this year after competing in the Rotax DD2. It did not take long for the alchemy with the Energy Corse Team to emerge. Just like his team mate Marco Zanchetta, he has taken the habit of constantly fighting at the front of the pack. The two drivers also achieved a fantastic double success during the first WSK Euro Series final at Sarno. In the rain, Juodvirsis was definitely the fastest on the track and he won ahead of Zanchetta, who had just climbed to 4th in the final classification of the WSK Master Series.

KF3: Burst of Speed for Jupp and Ferrucci
April and May have been marked by capricious weather and drivers have often faced changing weather conditions. But the team has been able to find the right technical solutions to adapt to and face these hard conditions, as well as to keep a very high level of performance. Unfortunately, in these cases, technical superiority is not all; you also need a bit of luck to achieve results, because sometimes races are a bit like a lottery. Connor Jupp has experienced it personally, in that he has not always been rewarded for his competitiveness, especially in WSK. At the European Championship held at Varennes sur Allier, the Briton was the leader during the heats, but was forced to withdraw in Race 1. He then climbed up from 28th to 14th in Race 2. In this European Championship, the five chassis racing in the competition all gained access to the final phase, and there were as many as 117 drivers overall. In addition to Jupp, drivers from Ennio Gandolfi Racing Team Luca Bottarelli, Danilo Albanese, and the Brazilian Giuliano Raucci, as well as the American driver Santino Ferrucci had a chance to show their worth. The latter has made huge progress with the Energy Corse Team. The American concluded his two races in the top 10 (9th and then 5th), but was also 4th at the WSK Euro Series round of Val d'Argenton.

KF2: Olsen and Snell in the Top 10
The first two rounds of the WSK Euro Series held in Italy and in France were washed by heavy rains. Already 4th in the WSK Master Series final classification after his excellent results at Castelletto di Branduzzo, the Norwegian driver Dennis Olsen mastered track conditions at Sarno and took the third step of the podium. Sam Snell (Energy Corse North Europe) ended five places behind, but he was the best driver at Val d'Argenton, especially in the pre-final, where he scored the points attributed to the 6th place. As for Vasily Romanov (RUS), luck (and success) was definitely not on his side!

Winning Participation in the DKM
The German Championship started at Kerpen with two great victories for the Energy Corse Team. Starting third, Dennis Olsen managed to make the difference and won Final 1 in KF2. In KF3, Toni Wolf (Energy-TM/Jedi Racing Team) took the lead of the Championship after his victory in Final 1 and his second place - in addition to the best lap - in Final 2. Energy chassis also showed some impressive performances in KZ2, with a second place in Final 1 with Simas Juodvirsis.