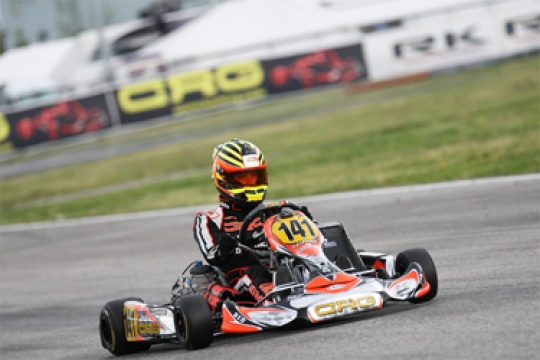 AFTER GAINING THE LEAD OF THE RANKING OF THE KF3 EUROPEAN CHAMPIONSHIP IN VARENNES, CRG OFFICIAL TEAM IS BACK ON THE TRACK IN FRANCE, IN VAL D'ARGENTON, FOR THE SECOND ROUND OF THE WSK EURO SERIES. THEEVENT INCLUDES, BESIDES THE KF3, THE KZ1, KZ2 AND KF2 CATEGORIES.

In the picture, Jordon Lennox Lamb in KZ2.

Lonato del Garda (Brescia - Italy). CRG's triumph in Varennes with Alex Palou- leader of the CIK-FIA KF3 European championship ranking - is still echoing, but the official team of the Italian factory is already at work and ready to race. The appointment is inFrance, again; this time on the circuit of Val d'Argenton for the demanding second round of the WSK Euro Series with all the CRG drivers racing in the four categories of the event.

CRG HUNGRY FOR VICTORY IN KZ1 AND KZ2. In Val d’Argenton CRG is present at its best in all the categories, beginning with the KZ1 with the reigning world champion Jonathan Thonon, then Davide Forè and the 2011 KZ2 European champion Fabian Federer. Thonon has to recover in the ranking: he is now fourth after his third and fourth place in Sarno. On the other hand, Forè and Federer will try to redeem themselves from their unlucky first race under the rain.
In KZ2 CRG officialteam expects a lot from Jordon Lennox-Lamb, the 2012 WSK Master Series champion and among the protagonists also in the first round of the WSK Euro Series.The English driver , too, is looking forward to redeem himself after the penalty he got in Sarno for his jump start which pushed him down the podium.
In the two major categories, CRG's colours wil be represented by the strong drivers of CRG Holland: Jorrit Pex in KZ1 and the Canadian Phillip Orcic, winner of the KZ2 first round.

LOOKING FOR REDEMPTION ALSO IN KF2. In KF2, also Felice Tiene on CRG-Bmb is eagerly looking for redemption after his unlucky performance in Sarno. His race was heavily conditioned by the crashes he got involved in because of the slippery asphalt. The same can be said for Luke Varley, who could not come into play for other reasons: a bowel infection obliged the English driver to quit the race after the first day of heats. Tom Joyner will run in KF2 too: he is the LH team standard-bearer, together with other protagonists such as Sorensen, Larsen, Slavin and Heinonen. 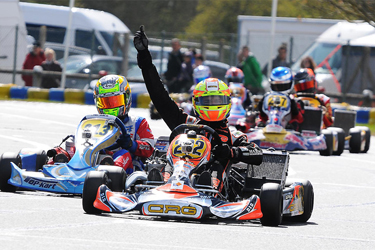 IN KF3 PALOU LEADS. Great expecations in KF3 thanks, obviously, to the young Spanish star Alex Palou Mantalbo, protagonist in the KF3 European Championship and current leader of the WSK Euro series thanks to his double win in the pre-final and final in last week's race of Sarno. In KF3 Palou has to confirm his peak physical form of the moment together with the other CRG's young standard-bearers, who are definitely improving fast: the Canadian Zachary Claman De Melo, the Brazilian Vitor Baptista and the English Rory Cuff.