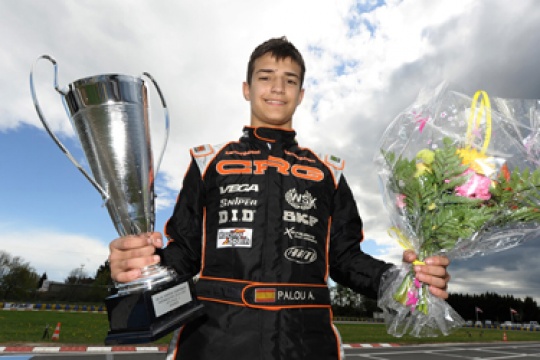 Crg official team wins in the KF3 European Championship of Varennes with Palou. He leads the ranking thanks to a fourth place in final 1 and a victory in final 2. In England, on 22nd July, the second and decisive round for the title.

Excellent result achieved by the CRG official team on the French circuit Jean Brun in Varennes Sur Allier. The young Spanish driver Alex Palou won the first round of the CIK-FIA KF3 European Championship. Anyway, it was above all a success of the whole team. In France, all the elements gave an excellent response under every point of view: from the chassis, which had a perfect setup for the demanding French track - which was made even harder by weather uncertainty - , to the performing BMB engine prepared by the skilled KVS technicians. The perfect chassis-engine match was then brilliantly exploited by the skills of the young driver from Barcelona, who has once again confirmed to be one of the major protagonists of the KF3.

PALOU BIDS FOR THE KF3 EUROPEAN CHAMPIONSHIP
In the race of Varennes, with 105 drivers coming from 23 countries, Alex Palou (in the photo) managed to win thanks to an awesome victory in Final 2: this victory, together with the fourth place achieved in Final 1, put him atop of the ranking before the second and decisive round of the KF3 European championship in schedule on 22nd July in England. Of course nothing is decided yet, given that drivers can count only on three results of the four final races, but Palou's bid cannot be ignored.
The KF3 European Championship ranking, after Varennes, has Palou as leader with 38 points, followed by the English Russel and the French Boccolacci, both with 25 points, respectively first and second in Final 1 and definitely Palou's major rivals in the race for the title.

PALOU IS PERFECT IN FINAL-2
In Varennes, the CRG driver had already made himself conspicuous in the time trials thanks to the overall second best time behind Gaglianò, in a session heavily conditioned by the bad weather conditions. In the heats, Palou confirmed to be very fast with three wins and two second places. Unfortunately, a crash in the first heat pushed him back to the fourth place on the starting grid in Final 1. After a not very brilliant start, he managed to recover from 8th to 4th, recording the the second best lap time, only three tenths behind Kodric's third place.
In Final 2 Palou was perfect: thanks to an impressive progression, he managed to take the lead of the race during the fourth lap. Then, after exchanging positions with Ferrucci, from the second half of the race onward, he took the lead and never left it until the end of the race, won after a final sprint with Dionisios and Gill.

THE INTERVIEW
Euan Jeffery, CRG team manager: “Alex Palou drove really well, he was brilliant. In Final 1 he started from the outward side of the track: this caused him troubles in remaining with the first and was forced to recover. On the other hand, in Final 2 he managed to do a good start and, after few laps, he was the leader, despite the wet asphalt caused by the rain which had fallen few moments before the start. But the perfect match CRG chassis and BMB engine was unbeatable. This French race was a very positive one for us: we lead the ranking and we enjoy it!"

All the results of the KF3 European Championship on www.cikfia.com