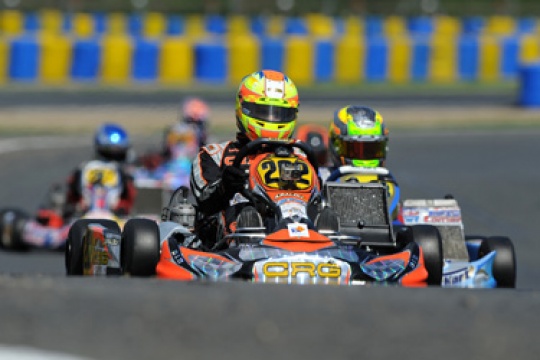 This weekend the French Varennes-sur-Allier track welcomed the first of two events of the CIK-FIA European KF3 Championship. As is often the case in this highly animated Juniors class (13-15 years), there was no lack of race incidents and developments. Winner of the first Race, title holder George Russell (Intrepid-Vortex) was unfortunately involved in an accident in the first bend of the second encounter. The Spaniard Alex Palou Montalbo (CRG-BMB) took full advantage of this to clinch Race 2 and take the lead in the championship ahead of George Russell and the Frenchman Dorian Boccolacci (Intrepid-TM).

With its new format of two races and four opportunities to score points, the European KF3 Championship is now focussing on both top speed and regularity. Following the second meeting to be held at Brandon, in Great Britain, three results will be taken in account to award the highly coveted title. However applying the regularity card in such a lively pack is never an easy matter …

Taken as the major favourites of this CIK-FIA European KF3 Championship the Brit George Russell (Intrepid-Vortex) and the Frenchman Dorian Boccolacci (Intrepid-TM) were up to expectations as from the first Race of this Sunday afternoon. Having both experienced bad luck during their last Qualifying Heat, obliging them to start off from 6th (Russell) and 9th l (Boccolacci) positions, it took the two drivers a mere two laps to grab the first two places. Title holder, the Brit George Russell never gave the Frenchman the opportunity to go into the attack, and the perfect way in which to start off in the championship.

Even though everything seemed pretty clear regarding the first two treads of the podium, it was not quite the same when it came to the third. It was finally the Croat Martin Kodric (FA Kart-Vortex) who got the better of the Spaniard Alex Palou Montalbo (CRG-BMB). Having broken away from a highly lively chasing group, the Italian Simone Cunati (Top Kart-Parilla) completed the top-5 ahead of the Italian Alessio Piccini (Kosmic-Vortex), who had started out from the front row, the Belgian Amaury Bonduel (Kosmic-Parilla), who had brilliantly climbed back up from 33rd place on the grid, the Brit Daniel Ticktum (Zanardi-Parilla), who set the best race lap time, the American Santino Ferrucci (Energy-TM) and the Dutchman Marijn Kremers (PCR-Parilla), who had experienced a mechanical problem during he warm-up lap and forced to take the start from the back of the grid. So his final 10th place was an excellent reward for his hard endeavours.

Amongst the pack, several drivers who had performed well during the Qualifying Heats saw all their hopes vanish due to various race incidents and accidents. This was the case amongst others for the Brit Connor Jupp (Energy-Vortex), who had started from the pole position, as also the Canadian Lance Stroll (Zanardi-Parilla), the Brit Callum Ilott (Zanardi-Parilla) and the Belgian Matteo Raspatelli (Tony Kart-Parilla), all three victims of race incidents and respectively relegated to 14th, 18th and 22nd places.

George Russell, having dominated Race 1 had a perfect start in the second confrontation of the day. However this was without counting on Simone Cunati’s clumsiness, who braked on the grass just in front of the first bend, violently hitting the Brit. Even though Russell finally managed to extract himself from the sand trap, he was well behind the pack. His rival, Dorian Boccolacci was now hoping to make the break in the championship. But having taken the lead after a poor start the Frenchman was pushed off track by his … Russian team-mate Robert Shwartzman (Intrepid-TM), who had committed a completely missed attack. Having climbed back into 11th spot, Dorian managed to grabble a few championship points, but no way could he hide his disappointment. Because up front Alex Palou Montalbo did not waste any time. Following his fourth place in the first Race, the Spaniard has scored the maximum number of points to take over the reigns of the championship ahead of Russell and Boccolacci, tied in second.

This second race also enjoyed a fair amount of surprises. Starting out with the second place of the Rumanian Marcu Dionisios (Top Kart-TM), who had set off from 23rd place on the grid, ahead of the Brits Alex Gill (SWRD-Parilla), 19th on the grid, and Nathan Aston (Intrepid-TM). Fifth was the American Santino Ferrucci, who proved his top speed throughout the weekend and holding off the Brit Daniel Ticktum, who once again set best race lap time. We also noted the 7th place, as in Race 1, of the Belgian Amaury Bonduel, eighth in the championship.

At the end of this first meeting the suspense remains high and the journey over to Brandon, on a highly modified first part of the PF International track, will definitely be worth the trip. So as they say, “See you there!”.

Discover all information on the European KF3 Championship on www.cikfia.com or via the link http://www.cikfia.com/championships/cik-calendar/2012/varennes/event-guide.html