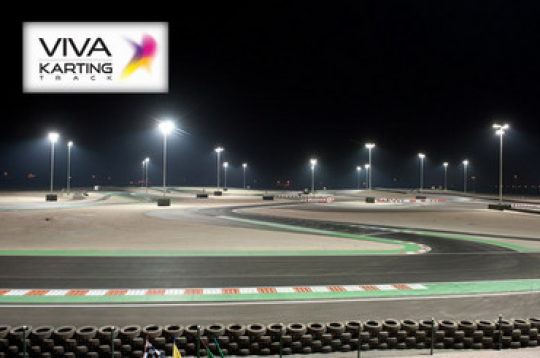 The CIK-FIA “U18” World Championship will end on 8-10 November 2012 in Bahrain, after its first two stages on 6-8 July in Portugal and on 24-26 August in France. Completed in 2011, the new Karting circuit recently renamed “VIVA Karting Track” and built next to the Formula One circuit of Sakhir will thus host its maiden major international meeting.

The CIK-FIA U18 and Academy Trophy Drivers will discover a 1,414m long varied and hilly course and “top range” infrastructures. For Karting, Bahrain intends to create a genuine event and propose something new. It will not simply involve this first World Championship organised in the Middle-East and there will not just be this new ultramodern circuit since, as a world first, there will also be finals held at night in the light provided by powerful spotlights. A special page in the history of Karting will be written on 10 November 2012, the year of the CIK-FIA’s 50th birthday.

“It will be a great honour for Bahrain, the CIK and the FIA to see the World Karting Championship and Academy Trophy visit for the first time the Middle-East region, explained the Shaikh Abdulla bin Isa Al Khalifa, President of both the BMF (Bahrain Motor Federation) and CIK-FIA. This country was the first Middle-East ASN to organise a Formula One Grand Prix. It was in 2004. The BMF and the VIVA Karting Track are determined to ensure that this major event is a big success as well as a means of promoting Karting throughout the Middle-East region, which has an enormous potential of development as regards motor sports. Holding the finals at night will make this meeting even more special.”

In order to match the event to the cost reduction principles dear to this U18 World Championship (the Drivers of which benefit from engines free of charge as well as from measures aimed at freezing the evolution of the karts during the season) and to the Academy Trophy (complete karts free for all), the organising committee of Bahrain will take care of the transport costs for the equipment and of the accommodation of all the U18 World Championship Drivers as well as of the 51 Academy Trophy Drivers. In the evening of the final day of the second round, held in France (Angerville), the competitors will be invited to load their equipments in containers to be shipped to Bahrain.

Here are some of the special conditions granted to every Driver (U18 and Academy):
- Hotel accommodation for 4 nights in a double room (from 7 to 10 November 2012) including breakfast, high-speed Internet access and airport transfers.
- Free of charge freight of kart and equipment from Angerville (FRA) to Bahrain, and return (return place to be decided).
- Lunch & dinner served at the track during the event.
- Shuttle services from the hotel to the circuit and vice versa. There will be 2 buses every morning from each hotel to the circuit and 2 buses every evening from the circuit to each hotel during the 4 days of the hotel booking.
- Visas to be arranged by BIC (Bahrain International Circuit).
- Car hire can be arranged upon request.
- Additional hotel rooms or nights can be booked at reasonable prices through the Hotel & Transport Department.