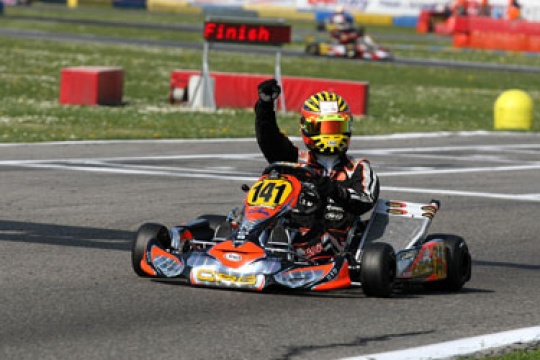 IN CASTELLETTO DI BRANDUZZO, LENNOX CONQUERS THE PODIUM AND THE TITLE IN KZ2. PEX AND FEDERER DOMINATE IN KZ1. TIENE ANDJOYNER ARE ONCE AGAIN PROTAGONISTS IN THE KF2 CATEGORY. IN KF3 DE MELO, AT HIS DEBUT IN THE WSK, BEHAVED WELL. PALOU FINISHES HIS CHAMPIONSHIP AT THE SIXTH PLACE.

In the picture, Lennox champion in KZ2

The success in this final event of this WSK Series was sealed also by the awesome first and second place in KZ1 achieved by the Dutch Jorrit Pex and the Italian Fabian Federer, besides the podium obtained by Felice Tiene in KF2, which heaved him and his CRG chassis powered by Bmb by KVS on the second step of the championship podium.

Also the performance in KF3 was outstanding, thanks to the Canadian Zachary Claman De Melo, who is learning fast how to handle the tough European KF3, after making himself conspicuous in the North American Rotax. Here in Castelletto, the new and young CRG driver finished with an excellent ninth place at his first experience in the WSK.

IN KZ2 LENNOX WINS THE TITLE. In KZ2, despite the tough competition, CRG did not miss the title. The Italian factory had concentrated all its resources to win the title on Lennox in this category. And the English driver paid back CRG's confidence: he was immediately among the protagonists at his debut behind the wheel of a kart in the gearbox category and made the best of his performance in this third round of the championship. He placed second in the first final on Saturday and third in the second final on Sunday. The ranking closed with Lennox first with a 32 point lead over Midrla and 38 on Celenta. 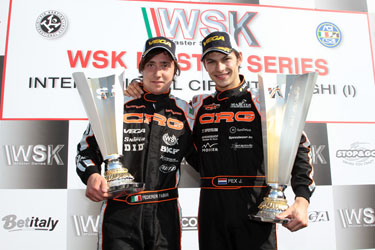 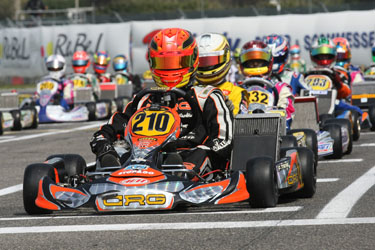 IN KZ1 CRG DOUBLES. In KZ1, after Fabian Federer's success on CRG-Maxter in the first final on Saturday - where he preceded his mate, the Dutch Jorrit Pex on CRG-Tm by CRG Holland-, in the second final on Sunday it was Pex who preceded Federer on the finishing line, achieving another outstanding first and second place. In the final ranking, Pex was the runner-up behind the winner Ardigò, while Federer managed toclimb up the ranking until his final sixth position.

IN KF2 TIENE IS THE RUNNER-UP, JOYNER THIRD. In KF2 Felice Tiene,  on a CRG chassis powered by a Bmb engine prepared by KVS, confirmed to be among the overall fastest, gaining the runner-up position of the category. After this result there are great expectations for this international season. The CRG driver during this weekend got two excellent third places both in the pre-final and in the final: he was one of the leading actors of this last WSK Master Series racing weekend. The English Tom Joyner, on a LH chassis by Lewis Hamilton of the Italsport team, was able to confirm his third place in the ranking despite he was stopped by an accident right in the final. For Joyner too there are now great chances for the next international championships. Luke Varley, on the other hand, could not enter the final phase because of some accidents.

IN IN KF3 DE MELO STANDS OUT. In KF3 Zachary Claman De Melo brought great satisfaction to CRG. The young Canadian driver, assisted by Mike Wilson - who won the world championship more than once -, was at his first participation in the WSK. In the final of Castelletto, on his CRG-Bmb, he managed to be among the best achieving an excellent ninth place. The Spanish Alex Palou, the other CRG driver, behaved well too. He could have aimed for the podium after his third place in the final, but unfortunately he had a bad start in the final and had to be content with a 11th place, arriving sixth in the championship.

IN THE MINI MAZZOLA MARTINEZ PERFORM WELL. In the 60 Mini the young Pietro Mazzola on CRG/Hero placed second on the podium of Castelletto behind Lorandi. So Mazzola was the runner-up of the championship, preceding the other young driver on a CRG/Hero chassis, the Spanish EliseoMartinez Merono.

Giancarlo Tinini, CRG Chairman: "This WSK Master Series was an excellent championship, fought until the end and really exciting. It was supposed to be a minor championship, a sort of training before the international season. It had, instead, great quality: maybe even too much because, in my opinion, this series should concern only the private teams, our satellite teams and not the official teams. Results weregood for us, and we had fine weather too: this conditions allowed us to prepare properly. We won the title in KZ2 with Lennox and, generally speaking, in KZ we had good results. We are satisfied also for what we got in KF2, where anyway we still have to improve something. Not bad in KF3 too, but here we were a bitunlucky in several situations. Anyway, from the point of view of our equipment we just need a little improvement to be very competitive in this category too. Now we are focusing for the WSK Euro Series, where - as usual - we'll try to do our best.”

Euan Jeffery, CRG team manager: “This last weekend of the WSK Master Series was very positive for us. We won the title in KZ2 with Lennox and Tiene was the runner-up in KF2. Federer performed very well in KZ1 and, generally speaking, we got good results with the Maxter engines. Also Joyner did well in KF2, as well as Varley did: unfortunately they did not manage to get what they deserved because of several accidents. In KF3 De Melo was very positive: he was at his first experience in an important race such as the WSK. Also Palou's performance was positive and he stood out in this occasion too.”

Jordon Lennox-Lamb (KZ2): “I'm really glad for the KZ2 title. Apart from the penalty I got for the start in the race of Muro Leccese, I always arrived in the first three positions, with two wins. The continuity of good results and the reliability of the CRG andMaxter equipment were good things. I'm very happy for my victory in the championship with the engine directly prepared by the factory: another reason to be satisfied of for CRG Group. Iwant to say thank you to all the team, because everybody did a great job and put me in the best conditions to win the championship."

Felice Tiene (KF2): “I'm the runner-up of the championship and I think this is a great result because I was always very competitive. Unfortunately, a technical failure in Sarno, with only 100 metres to go, prevented me from fighting for the title. Here, in Castelletto, we ran fast, but we lacked something in the setup of the chassis to aim for victory. We did not manage to make it 100% performing, but eventually I managed to step onto the podium and it didn't go this bad. Chassis and engine, when they are perfectly set up, go really fast. Now we are going to participate in the WSK Euro Series, and in the next few days we are going to focus on this demanding international event."

Fabian Federer (KZ1): “I'm glad because I was competitive throughout the weekend and because I won the first final on Saturday; but in the second final, on Sunday, I was obliged to start from the second row because my tyres did not perform as expected in one of the heats. Anyway, I managed to arrive second in the race and I feel satisfied."

THE FINAL RANKINGS OF THE WSK MASTER SERIES 2012

All the results on www.wskarting.com