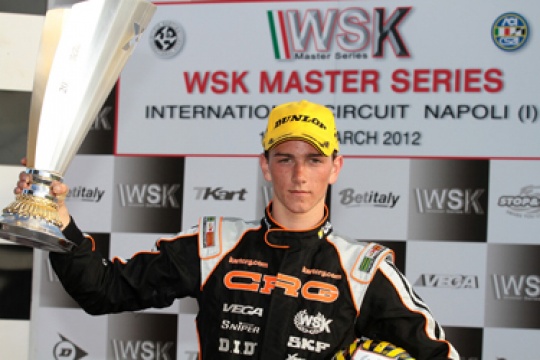 IN KF2 TIENE STOPS AT 100 METRES FROM THE FINISHING LINE; THONON IS OUT IN KZ1 WHEN OCCUPYING THE THIRD PLACE. ON THE OTHER HAND, LENNOX - IN KZ2 - AND PALOU - IN KF3 - PERFORM WELL THROUGHOUT THE WEEKEND. JOYNER IS EXCELLENT ON LH IN KF2.

Sarno (Salerno - Italy). On the International Circuit Napoli in Sarno, the results of second round of the WSK Master Series were a bit unfair for the potentiality shown by CRG, but it is always true that, on certain occasions, success can be achieved only if you have - besides the necessary qualities - some good luck by your side.
Just think of Felice Tiene in KF2: he stopped with only 100 metres to go for a technical problem at the chain pinion when he was about to smoothly double the second place achieved in the pre-final. Orjust think of Jonathan Thonon in KZ1, stopped by a technical problem when he was on the trail of the two leading drivers. 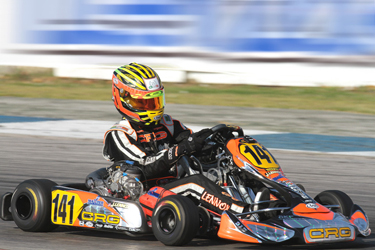 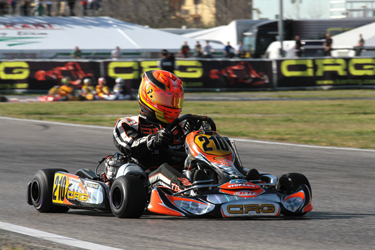 LENNOX AWESOME IN KZ2. Jordon Lennox-Lamb was absolutely awesome in KZ2, where the English driver wonthanks to a thrilling sprint final. The driver raced on a CRG chassis powered by a Maxter engine directly developed by the Italian factory; in final 2, after starting from the 5th place, he recovered thanks to a gripping race conduct and managed to get really close to the race leader Celenta. Eventually, the twodrivers passed the finishing line side by side, with Lennox classified second being just 74 milliseconds slower than the winner! However, now in the general ranking Lennox's lead over his rivals has increased to 34 points, also thanks to the wonderful victory in the Saturday's final 1.

TIENE IN KF2 IS UNBELIEVABLY UNLUCKY. In KF2 the special prize for the most unlucky driver goes to Tiene, racing with a Bmb engine prepared by KVS. After winning all the qualifying heats, in the pre-final Tiene had to be content with the second place behind Verstappen, with the precise intent to gamble everything in the final. Here a bad start obliged him to recover and, when he was second, had to give in when he was just a bend away from the finishing line because of a ruined chain pinion. It is a shame, because with the two second places Tiene would have been able to maintain the leadership of the ranking together with Verstappen, who won the final too: now Tiene is 30 points behind. The English Luke Varley, instead, was stopped by an accident in the heats. 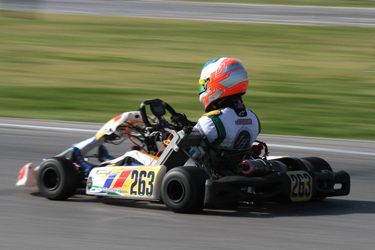 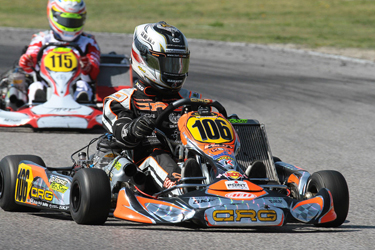 EXCELLENT JOYNER ON LH. Great race for the English Tom Joyner  in KF2 on the LH chassis by Lewis Hamilton and the usual Bmp engine prepared by KVS. He was simply unstoppable in his double recovery: in the pre-final he recovered from the 28th place to the 17th place. Then, in the final, he managed to conquer the podium thanks to an awesome second place. It was a clear proof of the strength and the competitiveness both of the driver and of thetechnical qualities of the kart. Joyner now occupies the third place of the championship ranking.

BITTER KZ1 Jonathan Thonon, in KZ1, did not manage to accomplish what he had started on Saturday with his good second place in the first final, achievedthanks to his CRG Road Rebel chassis and his Maxter engine by Tec-Sav. In final 2 the world champion showed great grit and managed to recover the several positions he had lost at the start. But, with only five laps to go, he was stopped by a technical failure right when he was about to attack the two leading drivers, Dreezen and Ardigò. The fastest lap of the race, eventually, was Thonon's: a further confirmation of the quality of his performance. Davide Forè finished 9th, while Mirko Torsellini got stuck in the last positions because of a contact with another driver. However, he had already showed he was able to keep in contact with the top drivers, like in the Saturday's final when he finished 5th. Fabian Federer, too, was involved in several accidents in  final 2 and obliged to retire. 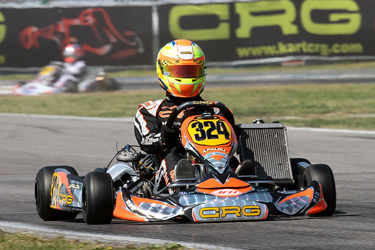 IN KF3 PALOU DID WELL.  In the KF3 final, the Spanish Alex Palou (in the picture) made himself conspicuous on CRG-Bmb. He was sixth on the finishing line after being among the protagonists in the qualifying heats. The American Santino Ferrucci, on the other hand, was slowed down by sone contacts in the pre-final and did not manage to enter the final.

MAZZOLA AND MARTINEZ FLY IN THE MINI.  In the WSK Master Series also the Mini category reserved to kids from 9 to 12. Pietro Mazzola and the Spanish Eliseo Martinez Merono performed very well,both on a CRG/Hero chassis. The hard-fought final was won by Mazzola, with Martinez as runner-up.


THE INTERVIEWS.
Euan Jeffery, CRG Sports Manager: “This weekend had started well in all the categories, with all the drivers running fast. In KF3 we were a bit unluckybecause of some accidents, but we are very satisfied for the speed we recorded during the race. In KF2 we performed well throughout the whole weekend; we are really disappointed for Tiene who got stuck few metres away from the finishing line, while Joyner managed to achieve two great recovery and got an outstanding second place in the final. In KZ2 Lennox gave a clear proof of competitiveness, exalting the performing qualities of the Maxter engine directly developed by the constructor. In KZ1 Thonon could have achieved a good podium but was stopped by a technical trouble. Forè and Torsellini, too, did a very good race, but some accidents slowed them down; the same happened to Federer. Sometimes weneed also some good luck to win."

Jordon Lennox-Lamb (KZ2): “Until Friday evening I wasn't very happy, but on Saturday we managed to settle things down both with the chassis and the engine, and the results started to arrive. I won the first final on Saturday and on Sunday I struggled for victory in final 2. Of course, it would have been better if I had won the second final too, but I didn't want to risk the podium because there were too many points at stake for the championship. I'm glad I can race in KZ, and I think that now CRG might let me taking part in the international season in this category."

Felice Tiene (KF2): “The start in the final didn't go very well, but eventually I managed to regain the second place, and if it had ended that way I would have been still leading the ranking. Now things are a bit complicatedwith 30 points to recover with only one race left. It is a shame it went that way."

Jonathan Thonon (KZ1): “I did well throughout the whole weekend. We did a great job; in final 1 I placed second and in final 2 I recorded the fastest lap more than once, with loads of overtakings. I even managed to reach the two leading drivers, but unfortunately I had a technical problem. We had found the right setup both for the chassis and for the engine and I was really happy because I felt I was really performing. The CRG chassis and the Maxter Tec-Sav engine showed how fast they can be on this occasion too."

Davide Forè (KZ1): “On Saturday I had several troubles during the race and I was obliged to recover until the 13th place in final 1. On Sunday, in final 2, I was 19th and I finally placed 9th, recording the 5th fastest lap. If I had started in a better position I would have got close to the podium. The result I got doesn't reflect my real performance of the week. Anyway, I think this is the best championship to gather the information we need to work for the rest of the season, especially for the points where we still have somethingmissing. We have reached a good level and we can rely on very skilled people and very good stuff: we definitely can improve in the forthcoming weeks."

The third and last round of the WSK Master Series is due next 1st April in Castelletto di Branduzzo (Pavia - Italy).