Author: Vroomkart International
The WSK 2008 adventure ended in Zuera, Spain. In KF1, Libor Toman and Arnaud Kozlinski battled it out for the final win. A two-way battle also in KZ2, with Jonathan Thonon caught off by Rick Dreezen at the start . In KF2, Flavio Camponeschi ran away with the win and the title, just like Nick De Vries in KF3, always in the lead.

In KF1, the 21-laps final saw Libor Toman and Arnaud Kozlinski fighting it out all the way through. After a hard duel in the early stages of the race, with the two exchanging the lead, Kozlinski waited till the last lap to catch off Toman. The Frenchman swept through between turn 1 and 2, but Toman didn’t let go and took him back few corners later with a harsh manoeuvre (maybe a bit too rough, with a contact too much) defending his lead to the chequered flag. Alessandro Bressan almost fooled the two, finishing third only 0”2 behind. 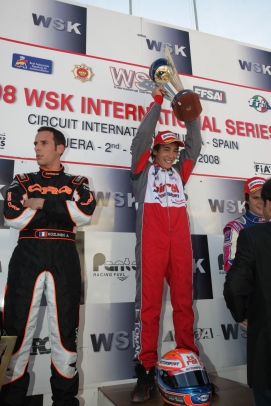 In KZ2, a two-way battle for Jonathan Thonon and Rick Dreezen, who caught off the KZ1 World Cup winner at the start. Thonon dropped down to 4th, behind Tony Lavanant and Andrea Benedetti. The Belgian driver managed to get past the two, without managing to get close enough to Dreezen, who ran away with the win. Brilliant performance for PDB driver with SGM engine Manuel Renaudie, who overtook Lavanant for 3rd on the podium. Good weekend for Davide Gaggianesi, Tommaso Cerquetti and Alessandro Giulietti, who finished right behind Lavanant.

KF2 showed a dominant Flavio Camponeschi, who also took advantage of the chaos behind him that saw Rowland, Smarrazzo and Benedetti involved. With one lap to go, the latter seemed able to get the better off the two for 2nd, but he came in contact with Smarrazzo, the two ending the race on the gravel. Rowland inherited 2nd, followed by Villelba who started 17th.


Nick De Vries in KF3 found no match both in prefinal and final. Behind him Gerard Barrabeig took a brilliant 2nd, while Mans Grenhagen came back from 11th to take the last step of the podium. Exciting fight for the other positions, with Del Rio out spinning at the last lap while in 4th, inherited by Clemente Picariello.