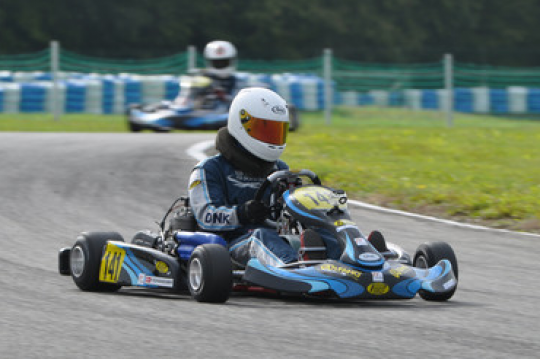 In addition to the free allocation of engines, the CIK-FIA “U18” World Championship has the specificity of introducing a system whereby chassis evolutions during the season are frozen.

The Championship is open to any make which has homologated chassis but requires the entry of the Manufacturers concerned. Any brand entered as supplier must have a marking applied to a minimum of 20 chassis as well as to a supplement of identical accessories and spare parts such as rims, spindles, hubs and especially rear axles. In order to guarantee as much equity as possible between Drivers, the chassis – which must be bought new for the Championship – are allocated by drawing lots.

Each Driver is authorised to use only one per event but the mandatory presence of the suppliers at the meetings is a guarantee that there will be a race-service for the participants, who will even have the possibility, should it be necessary, to replace a chassis badly damaged in practice or during a race if it is accepted by the Officials. The Competitors’ initial investment is therefore limited but the system offers security. Since U18 chassis must be homologated models (without front brakes), they can easily be used in other competitions and will thus retain an interesting market value even after the three U18 Championship races (Braga/PRT, Angerville/FRA and Sakhir/BHR).

Thirteen makes entered in 2010. Then there were fifteen in 2011. And seventeen have entered the 2012 edition, which proves the growing interest shown by brands and Manufacturers in the concept of the CIK-FIA’s “economical” World Championship.
The CIK-FIA Officials’ marking operations will start in April, which still leaves time for makes to test the accessories they will have identified and to select from their range of products the axle, the rims and the hubs best adapted to the prescribed compounds (LeCont Medium) and to the characteristics of the tracks that will be visited.

Discover the provisional ranges of chassis and accessories that the makes intend to enter for the Championship, as well as the prices announced for each of the main chassis elements. The choice of bodywork is left to the Drivers’ assessment, and their sole obligation is to use bodywork homologated by the CIK-FIA: ART Grand Prix, Birel, DR, Energy, FK, Haase, Intrepid, Lotus, Mach 1, MS Kart, Parolin, PCR, Righetti Ridolfi, Sodi, Swiss Hutless, Tecno,           Top Kart, Zanardi.

Regarding entries, it is worth noting the steps taken by two ASNs which will directly get involved in the “U18” World Championship by entering their “national teams”: the Netherlands, within the framework of their “KNAF Talent First” programme, will support five Drivers (negotiations are in progress concerning a sixth Driver), and Denmark’s DASU will renew the operation launched in 2011 with four Drivers.
Among the entries already registered are those of the reigning World Champion, Matthew Graham (Zanardi), and of many former Academicians like the Dane Schandorff (Birel), the Finn Moilanen (Haase), the Swiss Amweg (Lotus), the Austro-Rumanian Brunner (Lotus) and Russia’s Gagen (Parolin). The most experienced Competitor in the Championship will be Britain’s Easthope (Sodi), who will have entered every edition since 2010.