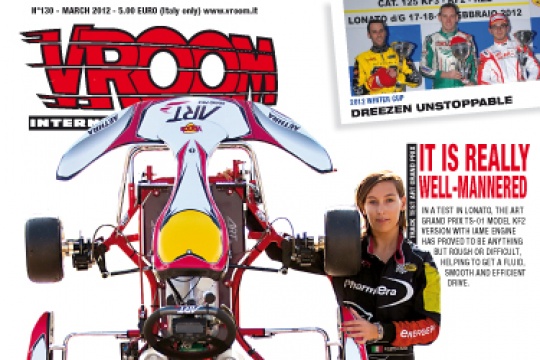 How sweet it is to be able to mix racing and technical articles. We bring you the top international racing events such as the Lonato Winter Cup, the Rotax Winter Cup in Campillos, and the Rotax Invitational Race from Malaysia, as well as the exclusive Track Test of the brand new Art Grand Prix TS-01, a true revelation for both quality and smooth drive. Also, Joe Romano’s unmissable Driving Shaft Balance analysis.

EDITORIAL
That red thread that ties (in a suffocating way) the various aspects of karting today
An issue of Vroom that is always rich, even this March issue, despite the winter break. Lots of reports on different topics.
There is an exclusive Track Test of the new Art Grand Prix chassis TS-01 model, version KF2, which proved to be efficient and well performing, and the confirmation arrived on occasion of the Winter Cup with Hanley and Leclerc as leading protagonists. As previously mentioned the international racing season has just started and here you have the report on the Winter Cup in Lonato, where besides a fantastic KZ2 event, two KF finals were seen that nearly humiliated the dirvers’ hard work.  You can read Joe Romano’s engineering, which analyses the drive shaft balance this month and the functioning mechanism. Remaining in the field of engineering, the report on tyres, how to mount them and take them off and how to make the most of them. Furthermore, we will take a closer look at the main innovative solutions of the latest chassis homologation and last but not least, from the USA we showcase several vintage models, rigorously stars and stripes on expo at the Riverside VKA Reunion.

Dear readers, it is a good thing though not to hide behind a finger, apart from what we have managed to publish in this month’s issue of Vroom International, we cannot overlook some important, nevralgic aspects that characterize today’s karting and the one of the future... Well, things aren’t going at all well. We just can’t go on like this. Csai (Italian Sports Authority) have realized  this and so has the Cik, and we have got the first official reactions, appreciated even if perhaps a bit too timid for the seriousness of the situation. In the meanwhile,  Kees Van de Grint – Cik vice president, whose love for karting and his good intentions cannot be denied – is taking up the situation with the aim of simplifying everything, from a technical point. And this is a good direction. But to solve today’s problems, you need much more than the liberation of transfer volume...
The KF class will be raced nearly always in international events (where you compete for the level of the race and not for the technical quality or that of the class) but it has drowned at a national and local level (where instead the drivers can choose). Well, it has proved its failure as it is now structured (and you didn’t need a crystal ball to foretell this), and everyone agrees that it has to be modified. Yes, but if we don’t want to make the same programming mistakes, it must be put right as from now. Now, immediately (OK, let’s say as soon as possible), so that the manufacturers have time to organize things with manufacturing and experimenting. And perhaps they can let it debut, as a test, already as from this year for example in the European Championship events. So that any mistake can be evidenced and corrected before it is too late. And in such a way that manufacturers can test their product before “throwing” it on the market, instead of obliging those who would be paying-clients to the role of  testers (like it was when the KF was born).

Well, but as usual we at Vroom don’t just criticize for the sake of criticism or without reason, and we also try to give some alternatives (differently to others who say that “all is well” also because they have no idea as to how to do things differently).
Something that has made us earn, among other things, a place at the Fia Press Council’s round table as karting media Representative. So, what can we suggest to solve a a crises that turns round the direct-drive classes? Well, we do have an idea, a simple one too that among other things allows us not to throw away the mechanical parts of today’s KF: change the centrifugal clutch for a manual one!
A bit like the 125 KZ, with control on steering wheel, but obviously without gears. A simple substitution, not at all difficult technically speaking, which would bring lots of advantages. Starting from the possibility of starting karts with a push start and consequently being able to do without the electric start and hence a battery, and the various wiring harness. In fact, eliminating 50% of today’s problems! Then there are lots of other advantages that we are not going to list here now, however, already this would be sufficient to justify such a change. Then if they did away with the exhaust valve, perhaps having at the same time a measurement of the relative port height on the cylinder without lots of other measurements and things, we’d have simplified not just the engines and the manufacturers’ work, but also that of the technical marshals’ too. Among other things, the most important, to conclude, is the abolition of independent front brakes on the steering wheel that have killed driving and made costs higher.
This is our basic idea. As it is not possible to go back to the 100cc, but neither to continue like this, and this way if nothing else, lots would change without sacrificing much. Obviously, you could do more. And we don’t exclude the fact that there could be more suggestions, just as valid or perhaps even more so (but we are still waiting to hear). However, one thing we are sure of: whatever it is, it must be done quickly. If possible, immediately. Or do we want, yet again wait the last minute with thee year engine homologation – that, remember are at the end of 2012 – to realisee that we have done everything wrong (or perhaps only something) when it is too late to go back or solve the smallest too?


RACE REPORT – 17th Lonato Winter Cup
After having determinedly overtaken his rivals several times, but always within norm, the Belgian driver grabs a great top class win, the 125 gear class, at the 17a Winter Cup in Lonato. In the KF2 and KF3 classes Max Verstappen and George Russell lead.

TRACK TEST – ART Grand Prix TS-01
In a rapid test in Lonato, the ART Grand Prix model TS-01 in KF2 version with Iame engine has proved to be anything but rough or difficult, helping to get a fluid and smooth drive that is efficient.

RACE REPORT – 4th Rotax Winter Cup
The season opener on the RGMMC race calendar saw some great racing across the weekend at the Rotax Winter Cup in Spain. Competitors from 22 different countries battled it out for the Winter Cup title and the chance to take home free entries to the Rotax Euro Challenge in all categories.

RACE REPORT – Rotax Invitational Race
The Rotax Invitational held at Speedway PLUS in Subang, Malaysia on 8th January, kicked off the karting season in the South-East Asia region. About 100 drivers put up a fantastic show, which will likely get more intense as the Rotax Asia season progresses.

SPECIAL – Chassis homologation innovation 2012/2018 - Details
In the 2012-2018 homologation 4 chassis stand out: Tecno SS30, Sodi Futura S2, Italcorse De Luxe and Jesolo Kart Apache. All 4 have innovative fore-carriages and, some have separate adjustment for camber and caster. How do they work?

TECHNICAL SIDE – Driving shaft balance according to Joe Romano
What image do the words “HEAVY METAL” bring to mind? Is it Sex, Drugs, Rock-n-Roll, while you listen to Mark Morton, the Lamb of God, melt his guitar as he strums the strings? Or is it of a 20 mm metal bar made up of W-Ni-Fe usually known as “tungsten” or with the term of the old V8 Masters… “Mallory Metal?”

S.O.S. KARTING – Tyres
This month we are going to deal with tyres and how to change them

VINTAGE USA – Riverside VKA Reunion
Despite the entire nation’s attention was focused on the Super Bowl, the highlight of American Football season, almost three hundred Americans and a few Australians gathered at the Adams Kart Track in California for the Vintage Karting Association’s eighth annual reunion. 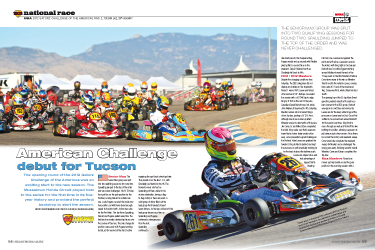 NATIONAL RACES
As the international racing season kick-started in February, national karting scenes could not wait that long. In the US, the Gatorz Challenge of Americas brought full grids in most of its classes right for Tuscon’s kart facility debut in the championship. Also, Australia displayed some great racing in the first round of the Rotax Pro Tour, and New Zealand was no less with the high profile CIK Trophy of New Zealand in Wellington. 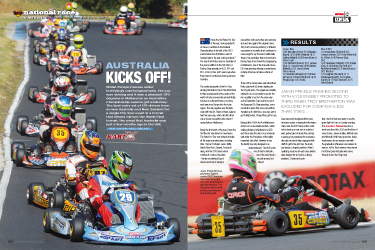 COLUMNS – Mondokart, April racing calendar
With the new season off the ground, and everyone’s tank full, we report the Dino Chiesa’s dispute over CIK new decisions regarding the KF1 World Championship, not a promising start for the top level series of our sport. On the bright side, things look shaping up well for Belgium Open, which will be organized by Limburg Karting brilliant management staff. The WKA (top US organizer) is starting to build a bridge with Europe by implementing CIK approved bodyworks; MaxSpeed was top of the lot among Rotax distributors in 2011, while Rotax Asia has launched a completely dedicated website, at last. Karting is getting more and more popular also in Eastern Europe, and we report the Award ceremony form Ukraine. Last but not least, Tillotson came up with two very interesting jet-adjusting solutions for your carbs, which featured at the Lonato Winter Cup.
In our usual fashion, we studied each single national racing calendar for you to bring you April Racing calendar: 35 high level national events from 18 countries around the world, as well as 5 top-notch International races.