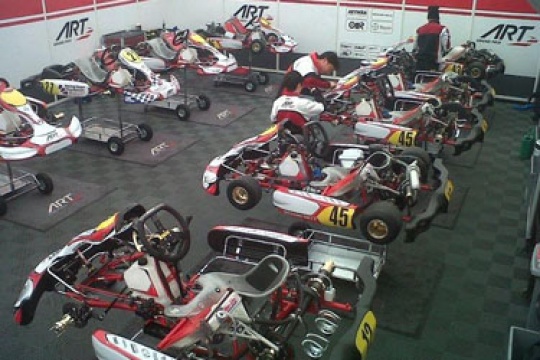 ART Grand Prix is proud to announce its "Official Teams" set to line-up alongside the Factory Team in the major events of the international karting calendar starting with the upcoming Winter Cup. They will also represent the ART brand in their respective country's main championships.

ART Grand Prix planned to be present in some of the most traditional kart racing
environments since the very beginning, thus deciding to provide support to some
highly-qualified and professional outfits.


>> ART Grand Prix (France)
The mother company of ART Grand Prix, currently committed to the GP2 and GP3
Series, has developed a karting department under supervision of Guillaume
Capietto, the current Technical Director of the GP2 and GP3 operations. He will be
joined by a younger engineer, fully-dedicated to kart racing, Max Fortier. Tony
Lavanant as been appointed as Team Manager, and thanks to his recent experience
in top-level go-kart racing, he will be able to provide an extremely valuable advice to
the young fresh racers of the team. ART Grand Prix (France) is also the official
distribution on French soil for the karting products of ART Grand Prix. The team will
line-up with Lucas Marchy (KF3) and Charles Gregory Machado (KF3) in the Winter
Cup, the WSK Euro Series and the European and World CIK-FIA races, in addition
to the French-based GPO Series. A specific model for the Minimes and Cadet
categories is currently undergoing the homologation process.


>> ART Grand Prix Finland
ART Grand Prix Finland is the official distributor for ART Grand Prix in Finland,
Estonia, Lithuania and Latvia. The team is headed by Juhani Pakari, Jukka Peltola
and Kimmo Vainio (father of ART GP3 Series driver Aaro Vainio) and will line-up
alongside the Factory Team in all the most renowned races on the 2012 schedule.
Like all the satellite teams, ART Grand Prix Finland will benefit from engineering and
technical support from the ART Grand Prix stable, and will be assisted on-track by
the works engine builder in KF, Machac Racing. The "Finland" team will be lining-up
in the Winter Cup with Toumas Haapalainen (KF3), Simo Laaksonen (KF3), Olli
Peltola (KF3) and Niklas Nylund (KF2) and besides their European program, they
will enter the Finnish Championship and the CIK-FIA Viking Trophy with the same
drivers plus Jere Kalliokoski in KF3.


>> ART Grand Prix Japan
The structure led by Manabu Michigami will be the Japanese distributor for ART
Grand Prix and will also enter the most important European competitions including
the WSK Master and Euro Series, plus the Winter Cup, with talented Takuya Okada
and Sena Sakaguchi in KF3. The distributor also operates two single-seaters with
full ART livery in a junior formula championship in Japan, offering a sensational link
between kart and open-wheel racing that will enable drivers to get well-prepared for
their European single-seater debut. The team fielded by ART Grand Prix Japan in
the Japanese Championship will include Sotaro Mimura, Minato Suzuki, Fumiya
Takayanagi in addition to Sakaguchi.


>> ART Grand Prix New Zealand (Paffoni NZ Ltd)
In addition to being their distributor for New Zealand, Danilo Paffoni and his race
team handed ART Grand Prix their first overall win with the TS-01 model at its
debut, as they won the first race of the CIK New Zealand championship in KZ with
Ryan Grant. They will also field kiwi Curren in the major national races around the
country.


>> Zip Kart (UK)
ZIP Kart was founded by the most successful kart racer in history, the sadly missed
Martin Hines, and the team will now be the official outfit for ART Grand Prix in the
United Kingdom. From its inception, Zip Kart cruised to 40 national, international and
world titles, thus contributing to launch some of the stars currently on the grids of the
top motorsports championships around the world. Their former Young Guns list
include Lewis Hamilton (F1), David Coulthard (F1 and DTM), Gary Paffett (F1 and
DTM), Anthony Davidson (FIA WEC) and Jamie Green (DTM). ZIP Kart, now
directed by Grant Munro, will line-up in the British KF2 championship with Ben
Barnicoat, Ricky Collard and Sam Webster.