Author: Vroomkart International
The most important championship titles of the season have been awarded, and we could not miss the chance to dedicate the front cover to Jonathan Thonon and Marco Ardigò, winners of the KZ1 World Cup and the KF1 World Championship respectively for the second consecutive year. And for all our readers, we have included three maxiposters of Jonathan Thonon (Crg/Maxter), European KZ2 Champion Tony Lavanant (Energy/Tm) and European KF3 Champion Aaro Vainio (Maranello/Maxter).

Together with all the articles featuring on October issue that we present below, we have included three maxiposters of KZ1 World Cup winner Jonathan Thonon (Crg/Maxter), European KZ2 Champion Tony Lavanant (Energy/Tm) and European KF3 Champion Aaro Vainio (Maranello/Maxter). 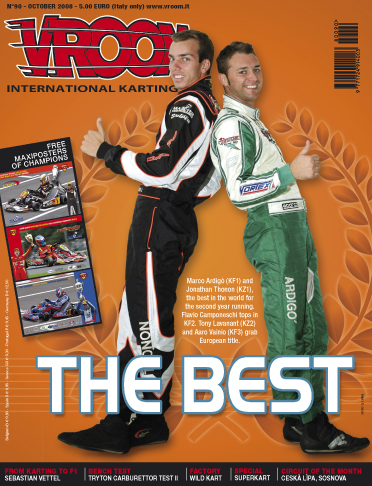 Goal. How exciting it was, when we were young to be first over the finishing line, yelling goal. And even today as grown ups, in this game that we live with all karting drivers, as in all other sports that allow you to play as grown ups and we too at Vroom have yelled: Goal!
The website Vroom.it has numbered 4000 subscribers. After just ten months since we set out again with 2000 subscribers. We really couldn’t have imagined that there would have seen such a response. At the end of last year, when Antonio and Ugo decided to dedicate this project to us, because the necessity arose, and because we couldn’t do without and for the numerous karting enthusiasts who surf on internet and deserve some attention, our prime objective was to offer karting fans a complete service, at 360 degrees, getting them involved and enabling them to help in divulgating karting as a sport. It s Archimede’s duty to consolidate continuously this service with a structure improves more and more, that allows users to benefit from mechanisms that are important to help set up many ideas that take shape month after month.
Four THOUSAND!! That’s really a lot. A great number, a goal for all of us who love this sport, very rewarding for us at Vroom and above all, for everyone who has believed in this project. Rewarding for all of you working to lay a solid base, on which to build a solid structure capable of producing a sort of karting, which his made to size for karters.
The future undoubtedly has in store other goals, which are just as important. Goals that we can only score if we stay together, with the same aim in mind, because if Vroom is a powerful rocket, you are the fuel. With less races and winter drawing nigh, the karting movement stops to think about what’s going to happen next year. Think about future directives from the ASN concerning engines, classes and regulating norms, all important for re-launching karting.
There will also be a new three-year homologation period for chassis, and with it newer, faster models that drivers must buy to stay competitive. But at this moment of general financial crises, are we sure that kart drivers will be motivated enough to face more costs? For this reason too, sports Authorities have to work hard and come up with the right ideas to encourage those who practice the sport, making sure that the same ideas are divulgated in time. 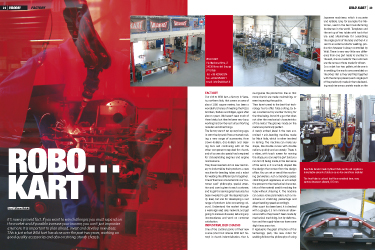 FACTORY – Wild Kart   It’s now a proved fact. If you want to win challenger, you must expand on the market and if possible increase your income, you can’t just improvise anymore. It is important to plan ahead, invest and develop new ideas. This is just what Wild kart has done over the past two years, working on good quality accessories and also on strong, sturdy chassis. 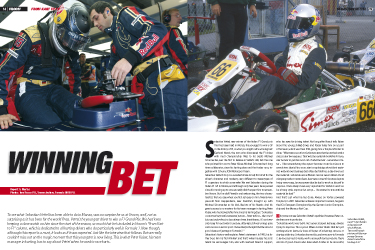 FROM KART TO F1 – Sebastian Vettel   To see what Sebastian Vettel has been able to do in Monza, was no surprise for us at Vroom, well, not as surprising as it has been for the world Press. Vettel, the youngest driver to win a F1 Grand Prix. We had keen keeping a close watch on him since the start of the season, so much that he’s included in Vroom’s “From Kart to F1” column, which is dedicated to all karting drivers who do particularly well in Formula 1. Now though, although this report is a must, it looks as if it was expected. Just like the interview that follows. But we really couldn’t miss out on the magic moment that this youngster is now living. This is what Peter Kaiser, his team manager in karting, has to say about Vettel when he used to race karts.. 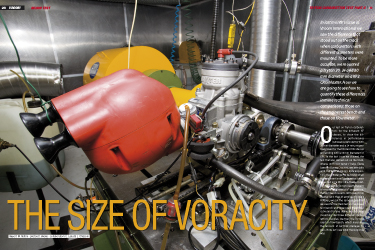 BENCH TEST – Tryton Carburettors   In last month’s issue of Vroom International we saw the difference that stood out on the track when carburettors with different diameters were mounted. To be more accurate, we mounted a Tryton 20, 24 and 30 mm diameter on a KF2 CRG Maxter. Now we are going to see how to quantify these differences in more technical comparisons: those on the engine test bench and those on flow meter. 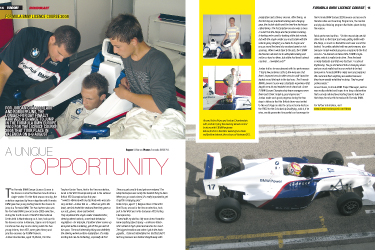 FORMULA BMW LICENCE COURSE – A Unique Opportunity  For the third season running, the selection organised by Vroom together with Formula BMW gave two young karting talents the chance to jump in a Formula BMW. For Jordan Chamberlain and Robin Frijns, the longed-for day finally arrived: a chance to jump in the Formula BMW Europe FB02 for the Licence Course 2008 that took place in Valencia on 8-9 August. 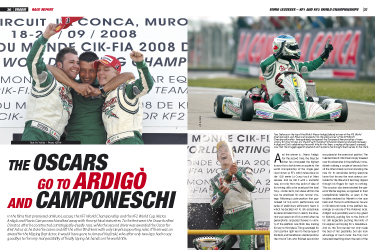 RACE REPORT – KF1 World Championship   In the films that premiered at Muro Leccese, the KF1 World Championship and the KF2 World Cup, Marco Ardigò and Flavio Camponeschi walked away with the mythical statuettes. To the first went the Oscar for Best Director, after he constructed a strategically deadly race, while the second driver was awarded the Oscar for Best Actor, as he stole the scene and left the other 89 drivers with only simple supporting roles. If there was an award for the Missing Best Actor, it would have gone to Arnaud Kozlinski, who after only two laps had to say goodbye to the very real possibility of finally laying his hands on the world title. 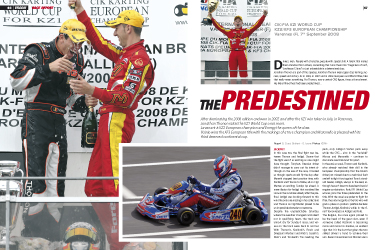 RACE REPORT – KZ1 World Cup   After dominating the 2006 edition and won in 2007, and after the KZ1 win taken in July, in Varennes, Jonathan Thonon raises the KZ1 World Cup once more. Lavanant is KZ2 European champion and Energy the queen of the class. Vainio wins the KF3 European title with the makings of a true champion and Maranello is pleased with its third deserved continental cup. 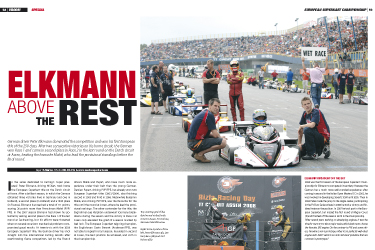 RACE REPORT – Special European Superkart Championship   German driver Peter Elkmann dominated the competition and won his first European title of the 250 class. After two consecutive victories on his home circuit, the German won Race 1 and came in second place in Race 2 in the last round on the Dutch circuit at Assen, beating the favourite Mahé, who lead the provisional standings before the final round. 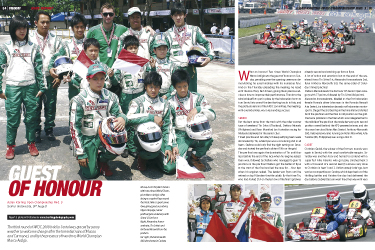 RACE REPORT – Asian Karting Open Championship   The third round of AKOC 2008 held in Sentul was graced by sunny weather (a welcome change after the torrential rains of Macau and Carmona), and by the presence of two times World Champion Marco Ardigò. Together with the race report, we feature a special presentation of the beautiful Sentul Circuit. 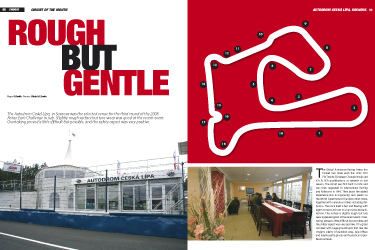 CIRCUIT OF THE MONTH – Autodrom Ceska Lipa, Sosnova   The Autodrom Ceská Lípa, in Sosnova was the selected venue for the third round of the 2008 Rotax Euro Challenge in July. Slightly rough surface but tyre-wear was good at the recent event. Overtaking proved a little difficult but possible, and the safety aspect was very positive.


NATIONAL RACES   The season is drawing to an end almost all around the world. In this issue we have reports from the USA (Rock Island and IFK); England (BRDC and MSA Series); Finnish, Swedish, Canadian and Brazilian national Championships; Australian Rotax Final; All-Japan KF1 Series, and the new entry, the Uruguay National Championship.


CARTOON – No Licence   TardyBraker is late for the last session. The only way to run in the engine is trying it on the small countryside roads near the circuit… but someone is waiting for him!