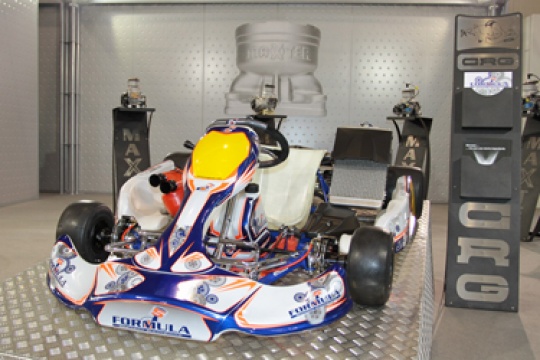 PRESENTED THE NEW CRG MODELS AND THE NEW KALI'- KART AND DARK KNIGHT CHASSIS. AMONG THE MOST APPRECIATED NOVELTIES THE NEW FORMULA 5 BY MAXTER ONE-MAKE. THE NEW OFFICIAL RACING TEAM WAS ALSO PRESENTED TO THE PUBLIC. IN 2012 CRG AIMS AT PLAYING ALEADING ROLE IN ALL THE CATEGORIES

In the picture, the one-make Formula 5 by Maxter

Once again the big CRG Group stand was one of the most visited and appreciated at the Kart and Race fair. All the new lines of products of all the brands of the Italian factory were on display; fans and professionals showed great interest and crowded the display areas of the exhibition centre of Montichiari (Brescia, Italy).

THE NEW RANGE OF CRG PRODUCTS. Visitors' attention was caught especially by the newly homologated CRG chassis, like the new “Dark Knight”, expressly designed for the participants in the Rotax Trophy; or like the award winning “Black Star” and “Road Rebel”, with several interesting technical upgrades. The "Black Flash" model (for rental only), which featured a two-seater version, was also very admired as well as the sophisticated chassis for junior drivers: the Mini and Micro powered by Rotax.
The stand was made more attractive by the presence of the new Kalì-Kart chassis. Its goal is to make the legendary brand of the 70s live again: it is where CRG was born from. The other chassis on display: the “LH by Lewis Hamilton”, which already won last year in the British championship with Tom Joyner and, last but not least, the brand new Maxter chassis, on which the new one-make championship Formula 5 will be run, powered by 4 or 6 gear Maxter engines. In the sector dedicated to the engines, all the models of the Maxter engines were greatly praised, with the KZ winner of the recent KZ1 world cup, besides the more and more performing KF; the Rotax engines, used successfully in the most popular one-make championship of the world; the Sonik engines, especially designed - for the time being - for the one-make championship of the American market. 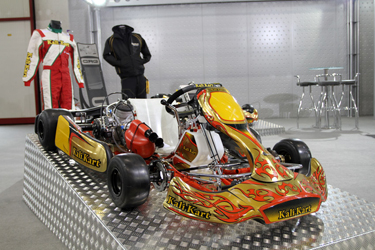 The Kalì-Kart chassis, with the new homologation, showing the
brand of the 70s

CHAMPIONS ON TRACK. The Kart and Race Fair gave CRG the opportunity to present a good deal of its 2012 Official Team. Several drivers showed their skills outside the pavilions: their performance at the wheel of the CRGs powered by Maxter  was simply awesome. Jordon Lennox-Lamb, Felice Tiene, Jonathan Thonon, Mirko Torsellini, Davide Forè, Fabian Federer and Luke Varley (who has just joined the team) performed in front of a rather numerous attendance.

THE IMPORTANCE OF THE FAIR FOR THE SECTOR. “I think that the Fair, at its fourth edition this year, should keep on living - said Giancarlo Tinini, chairman of CRG - in order to give all the constructors - especially the Italian ones - the possibility to show their products to a large public. The Fair is at the beginning of the year and this is a great advantage when you need put on display all your novelties and the new production which will be used during the forthcoming racing season. Unfortunately this year there were less exhibitors than usual: we cannot deny that the global crisis is biting hard in our sector too. Let's hope this situation won't last long, so we can have back our old fair crammed with exhibitors. Anyway, there are stillgood news: visitors are still coming. Figures are good, and such a high number of visitors shows that this fair is still a reference point for the sector. I hope that those exhibitors who weren't at the Fair this year chose not to come for reasons which have nothing to do with the crisis: they should understand the importance of this event and contribute, with their participation, to keep the Fair at top quality levels.
“In this Fair CRG participated with all its production - continued Giancarlo Tinini -, with the brand new Formula 5 one-make by Maxter and with the new homologations of the Kalì-Kart and the Dark Knight chassis, besides all our range of products, from racing to hobby and to karts for rental. But the most important novelty was the presentation of the Maxter Formula 5. It was immediately appreciated. It is a new idea for a one-make with gears, powered by Maxter. The market lacked such a product: in few words this is a new concept of the one-make, targeted at a new kind of customer. We believe this is going to be a valid alternative for all those customers who are not satisfied with the traditional TAG engine. The main characteristic is given by the possibility of using the four-gear engine, ideal for young drivers and on short tracks, and the six-gear engine on longer tracks where drivers can exploit all the power of their Maxter engine."

- The racing season is about to start. Which are CRG's appointments in 2012?
“We start with the Winter Cup, where all the categories are packed and this is definitely a good sign. We continue with all the WSK races, including the WSK Master. We also take part in the Margutti Trophy. Then, of course, we have the CIK-FIAchampionships, with the exclusion of the KF1 category. Our goal is victory, and not only in the categories where we have always won, like the KZ. Our commitment is also in KF2 and KF3, where we have a good potential and several promising drivers. We do want to achieve good results in these categories too." 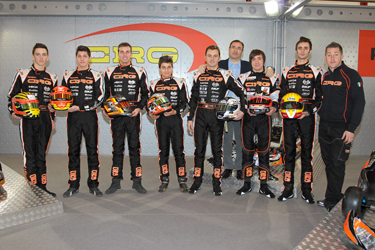 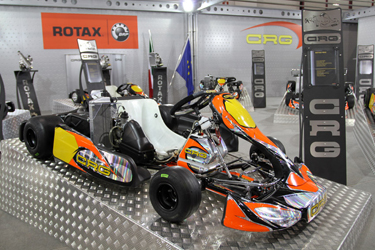