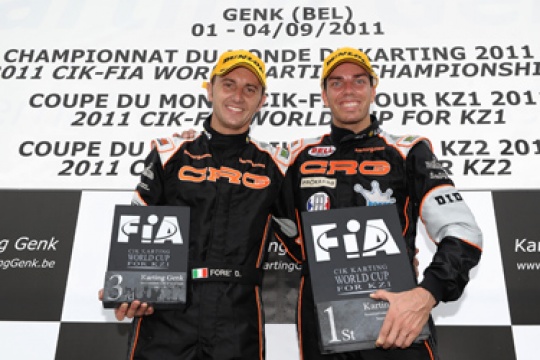 The 2011 season brought the CRG group excellent results at all levels: industrial, commercial and sporting. Drivers wearing the colours of the Italian make brought home some prestigious titles during their international campaign, such as Max Verstappen's triumph at the WSK Euro Series in KF3, one of the most popular categories, or Jonathan Thonon's new success in the most coveted event of the year, the World Cup for KZ1. Now CRG and Maxter are already looking to 2012, again with some great ambitions for the official team presented recently...

No one doubts that the makes belonging to the CRG group will be again among the protagonists of this season. "2012 is a new homologation year for chassis and tests performed recently have made us very optimistic about our chances of success", its president Giancarlo Tinini commented. "We ended 2011 on a high note with our chassis, on which we had already introduced some innovations that are now available on the market. We also expect a lot from the Kali-Kart brand we have brought back to life. We will have drivers officially representing the brand new version of this chassis".
As for CRG new official team racing in the KZ1, KZ2, KF2, and KF3 classes, it will be formed of young drivers with recognised talent as well as promising junior drivers. "We are not going to enter the World KF1 Championship in 2012: its calendar and regulations are not in harmony with our ideas" Giancarlo Tinini added.

After the countless victories achieved in the last few seasons in the 125cc gearbox class, CRG focus will be evidently on KZ. Respectively first and third at the World Cup, the Belgian Jonathan Thonon and the Italian Davide Forè will be together in KZ1, with three team mates as their back up: the Belgian Jorrit Pex, as well as the Italian drivers Mirko Torsellini, KZ2 revelation in 2011, and Fabian Federer. The latter is current European KZ2 Champion and has well deserved his place in the top category.
The Italian Felice Tiene, a great protagonist of the World KF1 Championship last year, and the Briton Jordon Lennox-Lamb will have a very busy programme, being engaged on two fronts, in KZ2 as well as in KF2! Quite a challenge indeed, and something that greatly motivates these two drivers well known for their burst of speed.
CRG also expressed its gratitude to Max Verstappen, Arnaud Kozlinski, and Laura Tillett for all they did for the Italian make. These drivers will no longer be part of the official team, which will now welcome a group of new recruits. A former Rotax star, the Briton Luke Varley will be back in the KF2 category with his fellow countryman Tom Joyner, 2011 British Champion, who will race behind the wheel of a LH chassis.
A young Spanish driver gifted with great potential, Alex Palou, will also join the official team in the KF3 class together with a US driver, Santino Ferrucci. Ferrucci has often taken the opportunity to make himself noticed on the other side of the Atlantic and will be keen to prove his worth. In addition to this, there will be numerous drivers aiming for victory all over the world, in all the categories, with a CRG, a Maxter or another product provided by the CRG group...