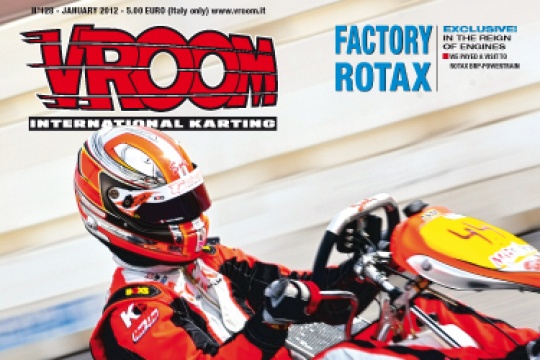 Back from a few weeks break, we pick up where we left off bringing you a truly awesome January issue. The cover goes deservedly to Sodi driver Anthony Abbasse, who after missing on the SKUSA SuperNats win a couple of times, makes it big in KZ2 at last. Besides the Asia-Pacific, AKOC final round and Desafio reports, we feature a whopping 5 tech articles! Let’s mention the hottest: Rotax Factory, Maranello new RS range Track Test, the second part of the new chassis homologation... as well as the updated CIK Hall of fame.

FROM THE EDITOR
First Listen, “stay tuned” with customers
Here we are, another year is about to begin… and the question is always the same: what is the future of karting going to be? Will Van de Grint (for those who don’t know, he is the top Cik/Fia manager) manage to unravel things? Let’s hope he manages to, because if he, a karting fan and a connoisseur of motor sport policies, doesn’t, I don’t know who will be able to. Building up credibility in karting is very important indeed. Also the international scene has suffered several blows and the KF motorisation is also in part responsible for the situation.

But don’t forget that this project, which seems to run against current, has been brought forth in a moment of important transition in the history of federal policies. That is, when some manufacturers decided to do away with Ernest Buser, the deus ex machine of the International Federation up to 1999, appealing to the Fia, run at that time by Max Mosley, who for some reason stepped in and promoted Frenchman Ivon Leon to lead the Cik, someone who, obviously, didn’t know anything about karting. Thus riding the anti-pollution policy at that time, brought in the 4-stoke engine into karting too, something that Leon had looked to very much. And in the end, after lots and lots of debates between Cik manufactures they found a way out, or trick: make an engine similar to the Rotax, denominated KF. Similar, and not at all suitable for the characteristics that a “free” racing engine should have transmitted. So what should have been a solution, a life jacket for karting, now risks being a boulder that is very hard to get rid of.

The meeting with the Cik operators in this field, first and foremost, on Wednesday 14th December, at the 7 Laghi circuit, led to believe that this problem is going to be difficult to solve. And Van de Grint must decide as soon as possible what to do about it, seeing that the next engine homologation period starts at the end of 2012. However, I wouldn’t make the mistake of bringing back the 100cc. One thing we are sure of is that the engines that aught to be developed are the 125cc gearbox class. This is the most popular engine today. And from this truth you could elaborate an engine that could suit young drivers today without taking too long. It is something, in fact, that Giancarlo Tinini (Crg/Maxter) is, in fact, already thinking of doing, even if in a limited local field like the “Single-make Trophy” event.
A solution that combines well with present day situation, where young 15-year-olds without any alternatives end up in car racing, or for the more unfortunate ones who end up changing sport. Well, there is no time to waste and for this reason it would be better to, at least, try to put into practice some sensible alternatives. 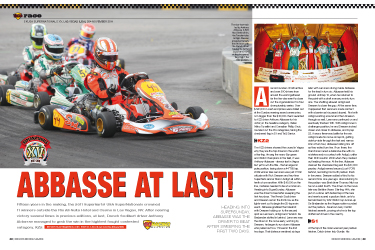 FACTORY – A visit to Rotax
We went to see BRP-Powertrain at Gunskirchen in Austria: it is the factory where Rotax engines for karting are made, but they don’t just make engines, a production that goes from snowmobiles to ultra-light planes. A real temple in the manufacturing of engines where 1100 people work and aim to get best quality and reliability.

TRACK TEST – Maranello RS12, RS10, RS9, RS7
The chassis and engine manufacturer bets on four different frames for 2012, new homologation and updated ones, with tubes of even 28 mm in diameter. We went and tried all four models that mounted engines of the same brand, both for gear class and direct drive

SPECIAL – Chassis homologation 2012/2018 part 2
Let’s go back to our new lot of chassis that have been homologated for the next five years, 2012 – 2018, with a second lot of manufacturers

SPECIAL – CIK-FIA Hall of fame 1964-2011
Dear readers, here we are again counting the titles awarded by the CIK-FIA from 1964 to date. It’s not the first time we do this, as we have already published the hall of fame back in 2009, but neither then nor at this time we managed to provide a fully complete list. A major effort to research results never or poorly recorded at a time when the press offices and data collection did not fit in the needs of the moment.

CLOSE UP – DAM Italcorse
Italcorse, taken over by DAM whose owners are the Mizzoni brothers, Mirko and Samuele, makes a strong come back with two new chassis and ambitious projects founded on a solid and logistic base. 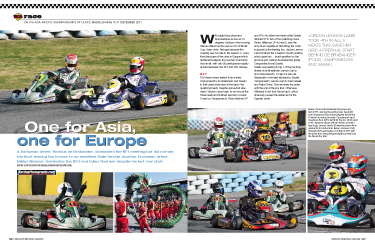 RACE REPORT – Asian Karting Open Championship Rnd.5
88 drivers entered the last round of the AKOC 2011 Championship in Macau. 20 in Mini Rok, 20 in Junior class and 48 entries in Senior categories. 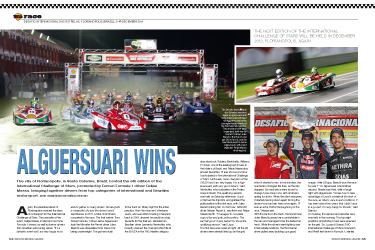 TECHNICAL SIDE – Checking displacement: engine doping
It looks as though after one or two little tests at the end of this past season some drivers seem to enjoy driving with displacement not conform to norms. How is it possible that these things aren’t noticed during the technical checks? Can anything be done about it, what should be done about it?

S.O.S. KARTING – Driving shaft
Here we are talking about our engines again and, following the advice of our friend Antonello, this time we are going to take a look at the driving shaft and how to assemble it properly.

VINTAGE USA – Vintage Kart Olympics 2011
What was initially planned as a one time only event to celebrate karting’s yesteryear recognised its tenth anniversary recently. The 2011 Vintage Kart Olympics was held from the 8 to the 10 of September at TNT Kartways in West Quincy, Missouri, attracting to the area vintage karting enthusiasts from more than 14 states and generating an estimated $135,000. 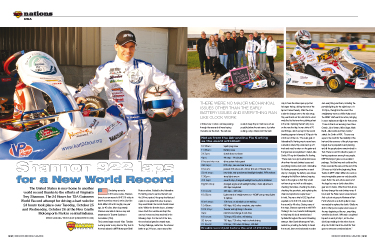 NATIONAL RACES
From the national karting scenes, we report a new World Record set in the USA: 922 laps in 24 hours on a Birel/Rotax kart courtesy of MRP Motorsport. From Poland, we recap the national champions of 2011, while from Portugal we have the winners of the Taca de Portugal (Portugal Cup). 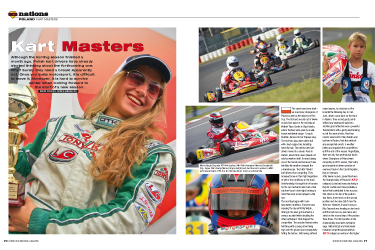 COLUMNS – Mondokart, 2012 International calendar
Hitting the headlines this month, some news from the CIK concerning engine allocations in the 2012 World Championship, CIK President and Vice-President re-election, and international licence issuing for international participants to national events. Making it on the top list, also the brand new Formula 5 engine by Maxter, aimed at the Italian market for the time being; Lonato will host the Margutti Trophy and Industry Trophy in 2012; ERDF Masters Kart proved a huge success in Paris-Bercy with Sodi electric karts; BRP-Powertrain amends 2010 Junior podium according to the decision of CSAI; Karting once again protagonist at the PRI Trade Show in Orlando.
Following a few changes, we publish the updated, and hopefully final version of the 2012 International calendar.