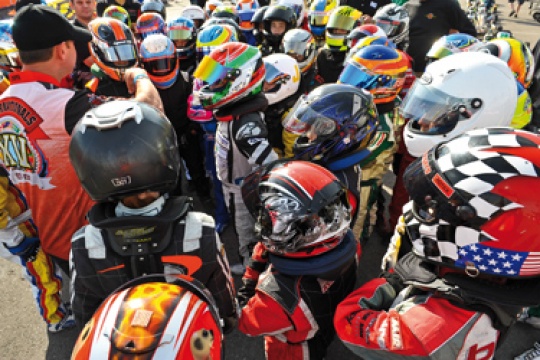 LATEST NEWS FROM CIK
The operating mode will of course be different and specifically adapted to the standard of KF1.
Contrary to what is practised in the “U18”, engine supply in KF1 will thus not be provided by a single-supplier, and competition will be open to every engine Manufacturer wishing to enter, subject to accepting the basic principles.

At the time they enter, the Drivers will have to choose their engine make amongst those which are specifically entered in the Championship. At the venue of the events, two engines of their selected make will be allocated to them by drawing lots.
A working meeting aimed at discussing the modalities of this original system was held on 14 December in Casteletto (ITA). The CIK-FIA Vice-President, Kees Van de Grint, and the Head of the CIK-FIA technical Department, Laurent Arnaud, gathered the bosses of the engine Manufacturers BMB, FIM, Maxter, Maranello, Parilla, TM, Vortex and XTR.
Although the exact terms of the regulations are still to be drafted and validated by the decision-making bodies of the CIK and of the FIA, most participants have agreed to define:
• the minimum number of engines that the engine Manufacturers will have to supply at each World KF1 Championship event (according to the number of Drivers they will have to service),
• the instauration of an engine lottery on Saturday and of another one on Sunday,
• the storing of engines in the Parc Fermé throughout racing days (Saturday and Sunday),
• the duration of the sessions dedicated to the indispensable running-in of engines,
• the conditions of intervention of engine Manufacturers after the allocation of engines,
• the package allocated by drawing lots to the Drivers (engine, ignition and exhaust),
• the conditions and deadlines within which Entrants will be authorised to change engine brands between two events.

International Karting Commission-FIA
On proposal of the World Motor Sport Council, the FIA General Assembly has designated the President, Vice-President and Members of the CIK for the coming year. Shaikh Abdulla bin Isa Al Khalifa (BHR) has been renewed as President of the CIK and Mr Kees Van de Grint (NLD) as Vice-President.

FIA International Sporting Code
Modifications to the International Sporting Code, proposed by the World Motor Sport Council for implementation as from 2012, were approved. In particular, the following amendments were made:
National Event (Article 18):
• The obligation to be holder of an international licence for any foreign Driver or Competitor participating in a national Karting Event entered on the calendar of an ASN, for which the said ASN authorises foreign participation.
• The obligation for licence holders entered in a national event to have obtained the authorisation of their own ASN.
• Foreign Competitors and Drivers cannot gain points in the rankings of national Championships and Series that they take part in.
Right of issuing licences (Article 110):
• Each ASN shall be entitled to issue licences to its nationals and, possibly, to the national of other countries represented on the FIA, in compliance to the existing statutory conditions, plus a new condition for Drivers aged less than 18 years, who must provide an attestation that they are in full-time education in the country where they apply for the licence.
Judicial and Disciplinary Rules
The General Assembly approved, for implementation as from 1st January 2012, a reduction of the appeal fee before the International Court of Appeal. The current fee is 12,000 €, irrespective of costs. As an exception, the amount of the appeal fee for the Karting events is set at 6,000 €, also irrespective of costs.