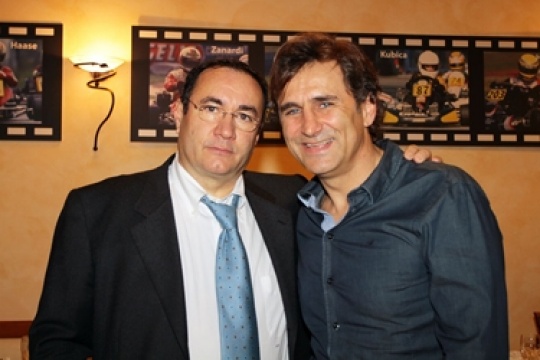 Crg prize-giving ceremony - Lonato (Italy), 16th December 2011
All Crg champions of the 2011 season got their awards. Celebrations for Thonon, Federer, Oulette, Torsellini, Pex, Martinez and all the other Crg drivers who stood out during the 2011 racing season. The best 2011 dealer prize went to the French “Kcm”. Premiere presentation of the new Maxter one-make

There were around 200 guests at the CRG annual prize-giving ceremony, the traditional end of the year event which gathers around the Tinini family all the elements of the Italian factory: its champions, its major international dealers celebrate their achievements in a deeply felt and warm ceremony.

This year's ceremony was particularly felt, given that it was the 25th CRG's anniversary; there was a full participation, with guests coming from all around the world and with a very special guest of honour: Alex Zanardi. His participation was the icing on the cake of a perfect night.

CRG's list of trophies was already very rich, and this year the number of trophies increased much thanks to Jonathan Thonon, winner in the KZ1 World Cup, Max Verstappen, winner in KF3 in the WSK Euro Series, Fabian Federer, winner of the KZ2 European Championship and of the CSAI Italian Championship, and Mirko Torsellini, winner of the WSK Final Cup in KZ2.
Giancarlo Tinini himself, in excellent shape and mood, gave the prizes to his drivers, helped by his daughters Vania and Nicole, who - together with Francesca - were the perfect hosts the ceremonydeserved. 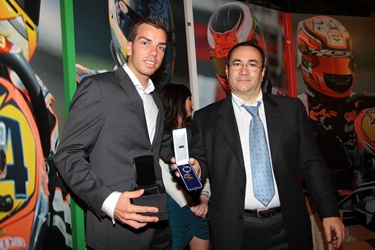 THE AWARDED. The first applauses went to Jonathan Thonon, who is doubtlessly the most representative CRGdriver of these last years: he won his fourth KZ1 World Cup on the circuit of Genk, at the end of a thrilling duel with his country fellow man De Brabander and his teammate Davide Forè.
Other applauses for Fabian Federer who, thanks to his successes in the KZ2 European Championship in Wackersdorf and in the CSAI KZ2 Italian Championship, besides his third place in the KZ2 WorldCup, has risen through the ranks and, in 2012, is joining CRG official team. The other CRG driver who stood out in 2011 was the Canadian PierLuc Oulette, winner of another prestigious title thanks to his win in the Rotax Grand Finals DD2 in the Arab Emirates.

Finally, all the other CRG drivers who achieved good results in the season which hasjust finished received a medal, starting with Mirko Torsellini. Besides winning the KZ2 WSK Final Cup of Wackersdorf, he stepped onto the podium in the KZ2 European Championship, he was the runner-up of the WSK Euro Series always in KZ2 and finished his season with a win in the Las Vegas S1.
Also Jorrit Pex - the winner of the Belgian, Dutch and German championships -  received a medal as an award for his results, as well as the young Eliseo Martinez, winner in the Mini Spanish Championship and in the Champions Cup in Spain.
Other awards went to all the other CRG drivers: Eddy Tinini, Davide Forè, Felice Tiene, Jordon Lennox-Lamb, Andrea Dalè, Daniele Delli Compagni, Leonardo Tano and Kristijan Habulin.

Among the world CRG dealers, the prize Best dealer of the year 2011 was won by a neck by the French “KCM”, represented by Cristian and Laurent Marchandise. KCM was back on top of the ranking after its victory of the sought-after prize in 2009. The Canadian PSL placed second, represented by Stephane St. Charles, before the Japanese Nagahara Service.
Among 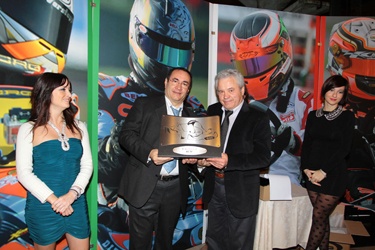 the Italian dealers, the first place was achieved by Galiffa Kart, Sporting Club Martina was second and  Valdibiena srl third.
At the end of the prize-giving ceremony, the Tinini family commemorated the recent demise of Franco Bandinelli - CRG dealer for Tuscany.

Besides the CRG champions, the other focus of everybody's attention was, of course, Alex Zanardi. His presence made the ceremony even more interesting and made the celebrations for CRG's 25th Anniversary more complete.

ALEX ZANARDI AT CRG. “I'm pleased to be here together with Giancarlo Tinini and his family - said Alex Zanardi - for the CRG prize-giving ceremony. In fact, I cannot help remembering that I won my first national title on a CRG kart. It's been so exciting meeting my old friends, but I'm not a nostalgic person: if I had wasted too much time looking back at what I had left behind, I wouldn't have been able to achieve all the good things I've achieved so far. Anyway, I must say I miss a bit my old days, especially when I look at my picture on a kart hanging from one of the walls of this room and then I see all these young drivers, with all their career in front of them... I must confess I feel a bit jealous. I'd like to be one of them, ready to "quarrel" with my kart and to do all those things which, thanks to my good luck, I've been able to do and which have been so exciting for me. I share lots of these wonderful memories with the CRG people. Besides, I can proudly say I was the first driver of the CRG era, because the other drivers of my team still raced on Kalì Kart. And I was the first driver who won on CRG, given that we won the 1986 Italian Championship of the 100 International A just a week after I had joined the team. It was such an incredible sensation, because I had just been through a series of disappointing situations in DAP, which was the most important brand of that period. Then, in just one week, I managed to win on CRG, putting behind me - from second to fifth - all those Dap-Dap, with all those drivers who, just a week before, had been my teammates. It was an incredible joy." 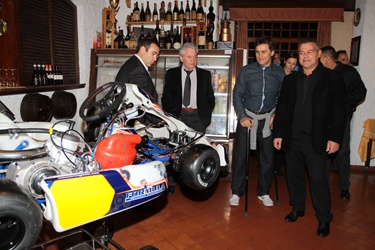 - Now your name is on one of the chassis which keeps on launching great champions...
"Yes, but all the merit goes to Dino Chiesa. I think Iwas clever when I talked Dino into taking care of the Zanardi Kart line when Giancarlo Tinini, at the end of 2005, told me that Dino could do it. We immediately arranged a meeting and I realized how he found the project exciting. Then, his skills and CRG technology brought outstanding results. I'm flattered when I think those results have been achieved under the patronage of my name. Among the drivers who have raced on our karts it is worth mentioning De Vries: he has recently finished his experience in karting, winning for the second time the World Championship and the WSK Euro Series. He is, according to my opinion, a very talented boy, and I think he would win anyway. However, when you join together the strength of people such as Dino Chiesa and of companies such as CRG... It is not simply a matter of appeal: there is real quality underneath, great skills. We are talking of real hot stuff. I think Nyck, this year, has been supported by his flawless talent but also by the best possible equipment and the best possible assistance: that's why he has been able to get unprecedented results. He has simply won everything there was to win. At the moment, talking of very young drivers, we are making Lance Stroll get the experience he needs. He is a very promising talent and he has his head screwed on. I've been positively struck by the modesty and the application of this young guy: they are the foundations for all, especially in such a sport. Anyway, I'd like to see some Italian guys on our karts, someone who can stand out at international level. It would be really great!" 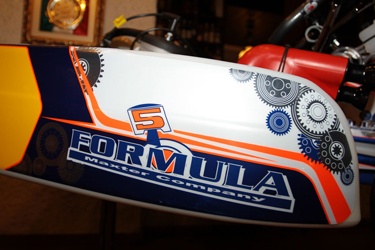 NOVELTIES FOR 2012: FORMULA 5 BY MAXTER. On the occasion of the prize-giving ceremony CRG dedicated to its champions who stood out during last 2011 racing season, there was the premiere presentation of the new CRG project which launches into the market the new Formula 5 by Maxter kart. The kart is going to be used in a new one-make championship reserved to gearbox karts, which seems to beparticularly appealing given the interest aroused by this kind of motorization all around the world. The chassis of the new kart is produced by CRG under the Maxter brand and, of course, is powered by a Maxter KZ engine, which can beused both with 4 and 6 gears. The transformation from 4 to 6 gears - or theother way round - can be operated simply turning a pin.
The 4 gear engine is particularly suitable for very young drivers or for all those drivers accustomed to racing on 700-800 metre tracks, rather widespread all around the world, while the 6 gear engine is suitable for more expert drivers, on tracks where the Maxter engine can perform at full throttle.
For younger drivers, who are warmly recommended to use the 4 gear engine in order to focus on their driving as much as possible, the power of the engine is reduced from 40 to 27 hp, with the substitution of the exhaust manifold.