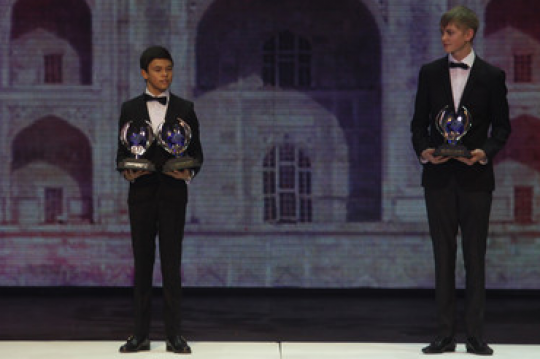 Traditionally organised in Monaco, the FIA Gala took place in another setting as the Champions of the 2011 season were celebrated in New Delhi, India, on 9 December 2011.

It was the opportunity for the two young CIK-FIA World Karting Champions, the Dutchman Nyck De Vries (16 years old) and the Briton Matthew Graham (15 years old), to find themselves in the limelight of this prestigious meeting which also gathered all the other 2011 FIA prize winners who have shone in Formula One, Rallies, GT1 and Touring Cars.

In 2011 the CIK-FIA World KF1 Championship introduced a new five-event format (Germany, Spain, Belgium, Italy and Japan) and, with four races per meeting, the season comprised twenty races. Before the start of the competition, Nyck De Vries, entered by the Chiesa Corse Team which competes with karts bearing the name of the former Formula One and IndyCar Driver Alex Zanardi, was generally tipped as the tremendous favourite. European Junior Champion in 2009 and World Champion, already, in 2010, the Dutchman had straight away dealt a severe blow to his competitors’ morale when he landed the four races of the opening event in Germany. Although his domination was less marked in the following events and marred by various technical problems which forced him to retire twice or to make spectacular recoveries, De Vries remained in the lead of the classification until the end of the Championship. Stepping on thirteen podiums in twenty races, including nine wins, McLaren Young Driver Development Programme’s recruit has amply deserved his title and the right to continue his career in single-seaters. The runner-ups were Britain’s Alexander Albon (15 years old) and Italy’s Flavio Camponeschi (19 years old).

Created in 2010, the new CIK-FIA “U18” World Championship reserved for 15 to 18 year-old Drivers continues to be attractive because of its concept which makes it very equitable (same engines and tyres for all allocated by drawing lots; free, but technically frozen, chassis), very affordable (engines and tyres allocated to everyone on a free basis) and instructive thanks to the EduKart educational programme associated with it. In one year the number of entries was increased from 70 to 89 and every continent was represented. Held over three events which saw as many different Drivers prevail, the U18 World Championship remained undecided until the very last race and was concluded by the Briton Matthew Graham’s win ahead of the Finn Pyry Ovaska and the Frenchman Anthoine Hubert. Graham’s success has also enabled the Zanardi brand to claim the title of CIK-FIA World Karting Champion for Makes.

Nyck De Vries stated: “Winning two back-to-back Karting World Championships is obviously awesome, more especially as these two titles gave me different sensations. The 2010 World Championship was held over a single-event, so landing it was emotionally very strong. In 2011, the format has been extended to 5 events and a total of 20 races. The title is therefore the outcome of a whole season. It all started beautifully, with 4 wins out of 4 races in Germany; then it got more complicated because of a few mechanical issues and a change to the starting procedure regulations which caused us some problems of adaptation. However, in spite of this, we showed that we were in a position to prevail at each event. I achieved one or several lap records and claimed at least one of the four races scheduled each weekend. After the title I took in 2010 maybe I had more to lose than gain by going for another season in Karting, but at the end of the day I grabbed the crown, won 9 out of the 20 Championship races and stored up experience, mainly mentally, which will be helpful for my maiden season in single-seaters.”

Matthew Graham stated: “It was a great experience to participate in that U18 World Championship where competitive spirit is very enjoyable. At the time to step up in this championship we were looking for good finishes, not necessarily for the title. Only after round 1 in Italy, at Ortona, where I won, we thought winning it would be achievable. In France, I came third and going into the last round at Sarno I had a good chance to win. Weather conditions were awful, nearly stormy, and I finished the final race third. When crossing the line, I was not sure whether I took the title, as I could not see my main rival, Finland’s Ovaska. But I realised I did it when I saw my parents hanging over the grandstand railing and waving and cheering!”