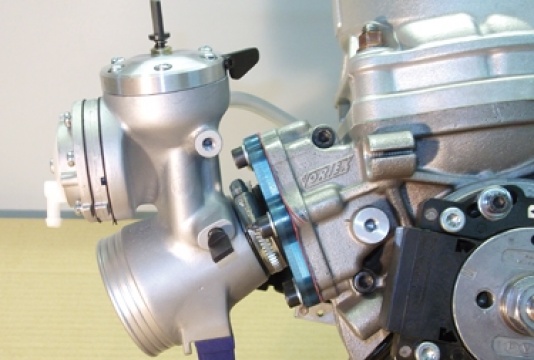 As early as the 2010 Lonato Winter Cup, Kilt Carburettors had already expressed its intention to conceive a carburettor of new conception for the KZ and Hobby markets. Almost two years later, Kilt reveals exclusively for VROOM the first of two versions of "OT1" for KZ, prior to its commercialisation in mid-January 2012.

Clearly, at the discovery of the new Kilt carburettor, the surprise is great! In terms of design, it looks like nothing already existing, but technically its design incorporates both the best of the diaphragm carburettor and the best of the float-chamber carburettor.

Why this choice, Jean-Pierre? "The pure and hard use of the diaphragm carburettor for the KZ works, of course, but it is always close to the detonation. Also, with a much too limited carburation, it is especially difficult to change gears. As we know it, the diaphragm carburettor was not viable and could not enjoy its benefits (insensitive to variations in position and the compaction forces) without it annexing the variable distribution system of the needle/seat with its chamber as reserve of fuel. With all the technical innovations that we wanted to apply, it took time, lots of tests and especially requested a complete overhaul in terms of design. In short, it was imperative for us to try to stand out with something different, which could help the user in the direction of ease of use. "