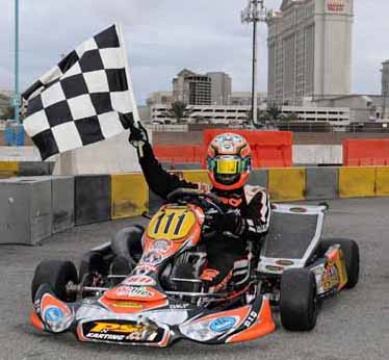 DOUBLE APPOINTMENT OF CRG AND OF THE ITALIAN DRIVER IN THE GREAT AMERICAN EVENT, IN THE S1 CATEGORY - WON BY THE ITALIAN CONSTRUCTOR -, AND ALSO IN KZ2, WHERE THE PARTICIPATION OF THE TEAM WAS UNCERTAIN BECAUSE THE ENGINES HAD BEEN HELD IN THE CUSTOMS. EXCELLENT PERFORMANCES IN KZ2 TOO. GOOD SEVENTH PLACE OF GARY CARLTON ON LH-MAXTER.

The end of season gives CRG Official Team another great success thanks to its young standard-bearer Mirko Torsellini. This time, after the recent win in KZ2 in the WSK Final Cup, the team achieved success in the most important kart event of the USA, the SuperNationals Las Vegas, where the Italian driver raced and won on a CRG chassis powered by gearbox 125cc Honda engines in the S1 category,assisted, as usual, by Alessandro Manetti. 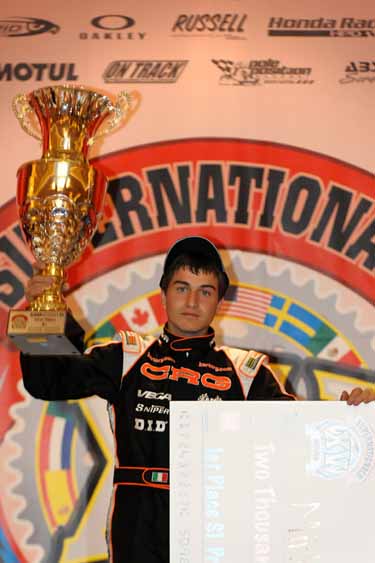 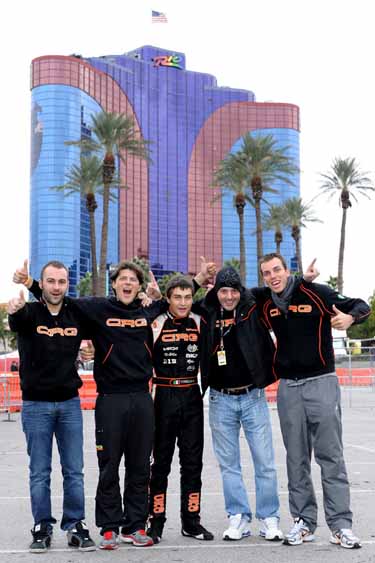 GREAT WIN IN S1. This year too the American race had more than 500 entrants in the 11 categories of the event, on the usual "toboga" track obtained in the square in front of the Hotel Rio, among the skyscrapers of Las Vegas, where there aremore driving troubles for the drivers but the sight is breathtaking.

At his first experience on this track, Torsellini found the right affinity quickly and, thanks to a top performing CRG chassis, his performance got better and better: from the 8th place of the time trials, Torsellini managed to get the third place in the first of the qualifying heats and two second places in the other two heats. In the final he started from the front row and managed to take the lead of the race at the fourth lap, increasing his advantage up to more than four seconds over his major rival Indy Dontje, and of more than 7 seconds on Daniel Bray.

DOUBLE APPOINTMENT, S1 AND KZ2. Torsellini's participation in S1 was a strange coincidence, given that the Italian driver arrived in Las Vegas to take part in the KZ2. Unfortunately the Maxter engines of the French technician Savard were held in the customs, so the Italian driver, fearing he could not participate in the KZ2,  decided to enter the S1 category too, the Honda one-make category. Savard's Maxter engines were finally cleared, so the Torsellini's travel to Las Vegas turned into a double appointment in S1 and in KZ2.


In the more performing KZ2 Torsellini was not as lucky as he was in the S1, despite he recorded excellent performances in this category too.

In the time trials he managed to get the 13th time, while in the three qualifying heats, after a crash in the first one, in the other two he was able to recover up to the 11th and 8th place.

The second time in the morning warm-up behind Ardigò raised expectations, but inthe final, after three laps, the CRG driver was obliged to retire for technical troubles.
The race was won by the French Anthony Abbasse before Marco Ardigò and Rick Dreezen.

LH ON TOP WITH CARLTON. The American event turned out to be a positive one for CRG, also because the American driver Gary Carlton behaved well in KZ2 on a LH chassis made by the Italian factory
Carlton, on LH-Maxter placed 7th in the final, after being always among the top drivers both in the time trials and the qualifying heats.

All the results on www.superkartsusa.com/national/skusa-supernationals.html