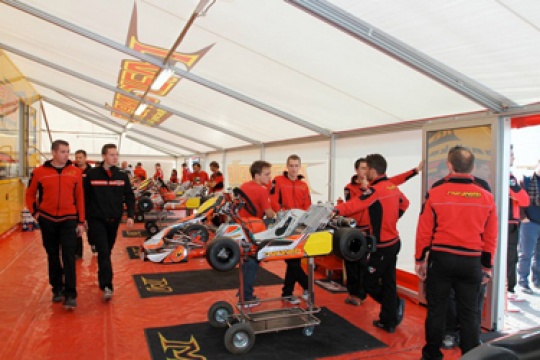 THE TEST DRIVE ON THE TRACK FOR DEALERS AND CUSTOMERS WAS A SUCCESS.POSITIVE JUDGEMENTS FOR THE NEW MARANELLO'S RS12 CHASSIS AND FOR THE NEW EVOLUTIONS OF THE RS7 AND RS10 CHASSIS. THE NEW LINE EVO WAS ALSO PRESENTED.

Lonato del Garda (Brescia - Italy).  The 1st Maranello Day organized by Maranello Kart was a full success. The event took place on the South Garda Kart Track of Lonato and it was the occasion to present to dealers and customers the brand new RS12 chassis and the modified versions of the winning RS7 and RS10 chassis.

round sixty drivers and customers, coming from Italy and several foreign countries, were able to appreciate and, of course, test on track the new Racing Maranello versions for the KF, KZ and Rotax categories, introduced by one of the owners of the Maranello Kart Giancarlo Giusti, by the team manager of the company Luca Iannaccone and the sports manager Alessandro Levratti (see picture).

Luca Iannaccone was particularly satisfied: "The main goal of these days in Lonato - said Luca Iannacone, responsible for Maranello Kart - was essentially meeting the Maranello Kart dealers and show them our new products, our new lines and all the changes our company has been through, besides getting in touch with the new demands of the different markets and,above all, trying to win back those market shares Maranello has been not taking enough care of for the last two years. Eventually, our customers were fullysatisfied and happy with the service we offered thanks to this event and with the stuff we showed and made them test, such as the new RS12, a very adaptable chassis, easy to drive and, in the same time, a chassis which responds verywell to the different tyres conditions."

What are your goals for the 2012 season?
"We are adjusting the details of all our activity. We have a new sports manager, Mr Alessandro Levratti, a young man but well determined and with a good deal of experience. He will take care of the technical and organizational matters of the team. Next year too we will be able to count on the support and the cooperation of the Eyckmans Team; they will help us at technical level for the development of the equipment. In the meantime, we have defined the agreements with several new technicians who will follow the development of the engines. So, we will have a parallel development in order to find together the best path to tread. Regarding the drivers, we are defining the agreements. We will take part in the KZ, KF2 KF3, categories and they are all important for us in the next season."

What will the characteristics of the novelties introduced on this occasion be?
“On a technical level, the new RS12 chassis received many appreciations, with its 28mm metal struts and 30mm horizontal bars: it is now a chassis completely different from the previousones. It will be used in the KF2, KF3 and Rotax categories, but in these days is also being tested for the KZ.

Besides the new RS12, we have carried out a homologation extension of the RS7, modifying the front, in particular the front "Cs" (where the spindle is fixed) which have been moved and positioned differently. The RS10, on the other hand, is one of the traditional chassis; it was modified especially on the front and slightly on the back to achieve better traction. Regarding the RS9, at the moment we have not modified anything in particular, given that it is a kind of chassis which has always worked well, with the 30mm tube, but we are working on it anyway in order to improve it even more.” 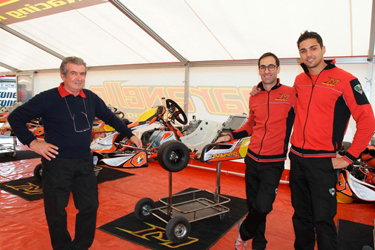 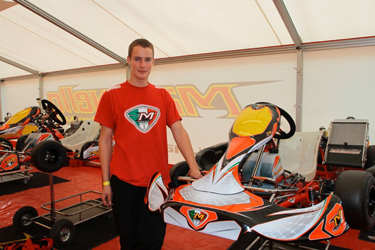 Also the new Maranello Kart's strategy of presence on the market is important: it will not present itselfjust with the Racing line as in the past, but also with a new ENTRY LINE, the EVO line, which includes a top quality and highly performing product but with a reduced price. The new ENTRY LINE EVO keeps the traditional 2008/2009 graphics and has got the RS9 bodywork, with black aluminium details instead of the magnesium ones of thePremier Line, as well as the pitch which is not variable but presents the usual rear hybrid one, which can be modified only in height.

These are the comments of some of the participants in the Maranello Kart's event of Lonato.

Andreas Sebastian Hansen, Belgian driver (see photo) third in the KF2 European Championship in 2011: "It's been a pleasure for me to take part in this test. I'm really satisfied with the new RS12 chassis. I've seen many people trying it. It's been a great initiative. A far as I'm concerned I hope I can run another season for Maranello. I'd like to try to grab the European title in KF2."

Dylan Lahaye, Belgian driver, among the protagonists in the international KF2 and of the KF1 world championship: "Maranello is making very good products. These new solutions are really interesting, as well as the development both of chassis and engines. I've found a very positive atmosphere and I've noticed how the customers of the Italian company have enjoyed a lot the opportunity of testing they have been given."

Win Eyckmans, Eyckmans Grand Prix team manager: "Maranello has had a very good idea in organizing this event. It is important to show vitality and keep on growing up as Maranello is doing: next year it will doubtlessly be one of the most competitive manufacturers. I'm really confident. Our team will support Maranello in the development, and we will take part in all the most important International events." 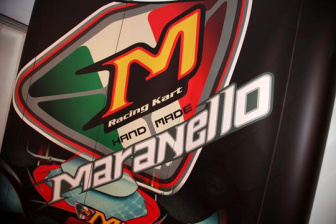 In 2013 Yannick De Brabander with Maranello Kart. In the team also Zanchetta, Dante and Hansen