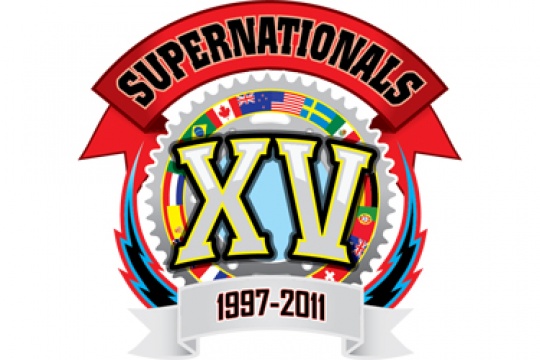 Record-breaking prize purse up for grabs in Las Vegas for 15th edition of karting spectacular
TEMECULA, CA (November 5, 2011) – Now just days away from its biggest event, Superkarts! USA is ready to announce the current prize package for this year’s SKUSA SuperNationals.

The 15th edition of the event, set to take place at the Rio All-Suite Hotel and Casino in Las Vegas on November 16-20, will feature one of the highest event purses in its history. Filled with cash, contingencies, inclusion into the Circle of Champions program, and numerous prizes, this year’s total prize package value has surpassed $120,000 – nearly doubling the amount that was awarded one year ago.

The total prize money being awarded, including contingency money available, is a remarkable $44,200. The three ‘Pro’ classes on the schedule – S1, KZ2, and TaG Senior – will see the top-five awarded cold hard cash. The international KZ2 category will once again vie for a $20,000 purse, with an incredible $10,000 going to the victor. Both S1 and TaG Senior will be gunning for $2,000 to each winner, as the rest of the top-five will split up the balance of the $5,000 class purse. Earlier in the year, Honda Performance Development (HPD) confirmed that they would hand out a total of $675 to the top-three finishers in each Stock Moto category (S1, S2, S4, and S5), totaling $2,700. Russell Karting Specialties has set up an event contingency for the top-three finishers powered by IAME engines in KZ2, KF2, TaG Senior and TaG Master. The international categories have $1,750 each up for grabs, while a whopping $4,000 is available in the TaG divisions – including $2,500 to any driver winning TaG Senior or TaG Master utilizing an IAME powerplant.

In addition to the purse and contingency cash for the event, a further $12,000 is waiting for the champions of the SKUSA Pro Tour. Drivers will take their best four results from the five-race schedule, as one drop is allowed.  Beginning the season with the two-race SpringNationals in Tucson, Arizona and then the double-event SummerNationals in Grand Junction, Colorado, the SuperNationals will cap off the 2011 series and crown this year’s champions in S1 and TaG Senior, who will each earn $3,000. Second and third in the standings will be awarded $2,000 and $1,000, respectively. For all champions in the eight categories that make up the series, their efforts on the season will earn them the privilege of entering the SKUSA ‘Circle of Champions’ program. All will receive complimentary entry packages for the 2012 Pro Tour – including free entries, race tires, and race fuel and oil – valued at $2,800 each. They will also be given the honor of running the national #1 plate in 2012. The second and third place drivers in the points will run the #2 and #3 plates next year as well, should they remain in the class. HPD also supported the Pro Tour standings for 2011 with $900 total to be awarded to the top-three in each of the four Stock Moto categories, totaling $3,600 in cash – and bringing the overall Pro Tour purse for 2011 to $38,000.

A number of companies have stepped in, as well, to help support the event with a hefty amount of prizes for this year’s SuperNationals. For the S1 winner, Corby Concepts has painted a SKUSA SuperNationals XV Special Edition Custom Helmet. A Skip Barber 3-Day School certificate awaits the victor of the competitive S2 Semi-Pro Stock Moto and TaG Junior categories. The winner of S2 will also receive a free CR125 Spec Honda engine kit (un-assembled parts kit) courtesy of HPD and valued at close to $2,500. Both the S4 Master Stock Moto winner and an S4 ‘driver-at-large’ will each win a chance to test a World Speed Motorsports FormulaSPEED2.0 formula car. The top-five for all 11 classes will receive Oakley Sunglasses, valued at $8,250 total, as well as a variety of Mothers Polish car-care products. GoPro has also sponsored all 11 categories with a ‘Hard Charger Award’, where the driver of each class who most improves his position from the start of the main event to the checkered flag will earn a new GoPro camera.

Having formed a partnership starting with last year’s event, renowned French watchmaker Bernard Richard Manufacture (BRM) has custom-built two commemorative watches valued at $4,000 each for the winners of TaG Senior and TaG Master. Capping off the prizes is a ticket to the Rok Cup International Final. The Pro Tour champion of the TaG Cadet division will receive a ticket to compete at the 2012 event in Italy, thanks to a support package offered by engine manufacturer Vortex. In total, the prizes offered at this year’s SKUSA SuperNationals reach a value of more than $40,000.

Although not included in the overall prize total detailed above, SKUSA’s ‘Guaranteed SuperSunday Starting Position Program’ has massive value to those fortunate to be on this year’s list. The program provides a starting spot on the main event grid, regardless of qualifying and heat race success, to the top-three drivers in the Pro Tour points heading into the SuperNationals, as well as every SKUSA regional champion.  There are five classes that will activate this program in its inaugural year: S2, S4, TaG Senior, TaG Junior and TaG Cadet.  Considering the effort and expenses necessary to run the SuperNationals, this reward program is hugely important.

In S2, two of the top-three drivers in the Pro Tour point standings are also regional champions. S2 point leader Kyle Hathcox has his guaranteed starting position, as does PKC South champ Nicky Freytag (second in Pro Tour points) and Mountain Region title winner Cory Milne (third in Pro Tour points).  PKC North champion Jared Woolf and Central States Challenge winner Joe Ruch will also have a reserved spot on the SuperSunday grid in S2.  In the S4 class, Jimmy McNeil, Nick Firestone and Roy Montgomery are all in the show thanks to their position in the point standings, as are regional champions Jim Kidd (PKC North) and David Conyers (Mountain).

In the TaG Senior class, championship contenders Brett Felkins, Dakota Dickerson, and Matt Johnson will go head-to-head for the title thanks to their positions in the Pro Tour points, while Travis Lowe (PKC South), Austin Elliott (PKC North), Rory Mackey (Mountain) and Kyle Koetters (Central States) will all be racing in the main event on Sunday.  Jake Craig, Parker Thompson and Austin Dement are the point leaders in the TaG Junior class, and all three will be guaranteed a chance to run for the title on SuperSunday.  Joining them with tickets straight to the back of the grid should a problem arise will be regional champions Carter Williams (PKC South), Blaine Rocha (PKC North) and Mianna Wick (Mountain).  Last, but not certainly not least, the TaG Cadet class will be a wild one to watch in Las Vegas.  Pro Tour point leader and PKC South champion Colton Herta is a definite in the show, where he will be joined by fellow point leaders Davey Manthei Jr. and Flinn Lazier.  Hunter Corbitt is also in the program as the TaG Cadet champion in the PKC North series.

Superkarts! USA remains focused on providing the best value in karting, and this massive list of purse money, prizes, contingencies and special driver rewards for the SuperNationals is proof-positive that they are dedicated to giving back to the racers.