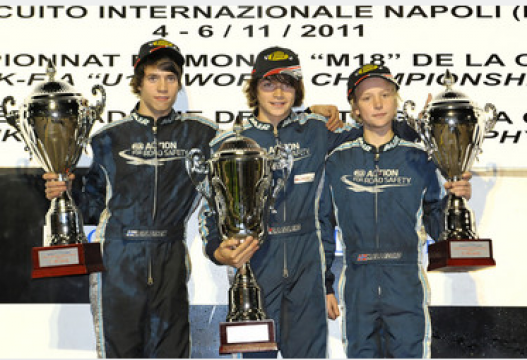 There was a major drama at the start of the Academy Trophy Race One. Pole man and championship leader Charles Leclerc suddenly went from first to a long way last on the formation lap! Two more formation laps were signalled but Leclerc could not reach the pack and had to start last. He later explained that someone had crashed into him and his chain had come off. He had to stop and put the chain back on!

His main rival Ben Barnicoat took a big lead but was eventually overtaken by the impressive Dutchman Marijn Kremers. It was not Barnicoat’s only disappointment. Leclerc steadily picked off the places and at the chequered flag was up to a most creditable 6th place whilst Barnicoat was 2nd. Juha Valtanen was 3rd and fellow Finn Aatu Moilanen 5th with Russian Vsevolod Gagen in between them in 4th place.
Race Two was a disaster for Ben Barnicoat. He was in 2nd place on the opening lap when it appeared he was the innocent victim of heavy contact. He dropped to the back of the field. In the meantime Charles Leclerc stayed clear of all problems as other drivers made contact with each other. He stayed in 3rd place for some time then quietly moved into 2nd and then took a lead which he never lost, Juho Valtanen was 2nd and Martin Ellegard was promoted to 3rd after Kremers was penalised.
Barnicoat drove a brave race up into 13th place but it was not enough and the Englishman was confined to runner-up in the championship. He was very sporting in defeat acknowledging how good the champion was but did say ‘I feel very disappointed because I definitely do believe I could have made a very serious challenge for this title’.
Leclerc was focussed even after his victory. He explained that when he had to put on his chain and start last, he refused to believe he would not win. ‘I just had to drive as strongly as I could. I picked each place carefully and when I saw Ben Barnicoat with a problem I knew I could definitely win. This has been a good championship and I have driven my best all year’.