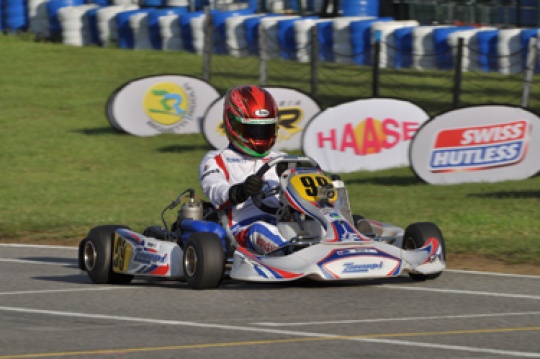 The month will begin with Aidan Wright (Cairns, QLD) competing in the final round of the CIK-FIA World ‘Under 18’ Championship in Sarno, Italy on November 4-6.

Following the opening two events in the championship, Wright is 19th overall in the standings and buoyed with confidence following a round win at the final event in the CIK Stars of Karting Series.

“At the start of the championship, I really didn’t know what to expect but it has been a great experience to race against the world’s best young drivers,” said Wright.

“I’ve been pretty pleased with the opening two rounds but I’ll be trying pretty hard to finish the year off on a high.

“Winning the last round of the Stars of Karting Series was a good boost for my confidence, hopefully I can take some of the pace I had there and take it overseas. A top five would really be the icing on the cake for this year.”

Also competing overseas on the opening weekend of November is Sydneysider Aaron Borg (Minchenbury, NSW). The 21 year-old will be competing in the All Japan Yamaha Championship as a reward for winning the Clubman category on this year’s Yamaha Challenge.

Fothergill will be supported by the Australian Karting Association, courtesy of his CIK Stars of Karting victory in 2010, and Eastern Creek Karts in his quest at one of the world’s most iconic events.

“To compete in Japan is something that I’ve been looking forward to for almost 12 months now. Unfortunately, the devastating earthquake earlier in the year meant that it was delayed by a few months and I’m really excited about competing overseas,” said Fothergill, who will line-up for the Kosmic Racing Team in the event.

“It will be the first time that I’ve competed overseas, and with the Asia-Pacific Championship being held alongside the World Championship, all of the big factory teams will be there so I’m keen to make a good impression.

“Along with the support gained from the Australian Karting Association by virtue of winning the 2010 title, I’m very thankful to have the support of Garry Holt and the team at Eastern Creek Karts. I’ll be going into the event knowing that I couldn’t be better prepared and supported for it.”

The following weekend (November 18-20) will see an Aussie invasion on the 15th Annual SuperNationals at Las Vegas in the United States.

No less than 11 Australian drivers will be competing in America’s most iconic karting event on the temporary circuit built in the car park adjacent to the Rio Hotel and Casino.

For Wall, it is the second year in succession that he has contested the event.

“I was fortunate enough to be involved in the event last year and was blown away by the magnitude of the event, but then again I wouldn’t have expected anything less from the Americans,” said Wall.

“After seeing the event, I would certainly say that this is a ‘bucket list’ race for any karter – even if it is just to go over and watch the racing because it’s just amazing.

“From being there last year, I learnt a lot and I’m going into this year a lot more prepared. We’re taking our own equipment over there this year, that way we know everything back to front and are more comfortable with our gear.

“Hopefully we can match it with the world’s best and do Australia proud.”

David Kermond (Lugarno, NSW) was due to compete last year before breaking his right wrist in a testing accident. He is once again in a race against time to line up for this year’s event after badly bruising his left wrist earlier this month at the NSW Championships. However, he is confident of being on the grid in the TaG Senior category.

Throughout the final week of the month (Nov 21 – 27) Australia will have 11 competitors on the grid in what is classed as the ‘Olympic Games of karting’ - the Rotax Max Challenge Grand Finals – at Al Ain Raceway in the United Arab Emirates.

Twelve-time Australian Champion Dave Sera (Narre Warren, Vic) will be one of four Australians competing in the Senior category. Sera will be joined on the grid by Tyler Greenbury (Toowoomba, QLD), Josh De Maio (Shepparton,Vic) and James Macken (Gold Coast, QLD) in the 72-driver field.

“Having already competing at this venue in 2007 and qualifying fastest, my expectations are quite high as I’ll be looking for a podium finish this time around,” said Sera, who will be competing for the fourth time in the event.

“After winning the Florida Winter Tour against 70 odd competitors in America early in the year, taking out the Australian Rotax Nationals and last weekend winning in New Zealand, I’ve had success against the best drivers from three different countries this year. Not only is this a good achievement but it’s also a huge confidence boost for me going into the World Final.”

Victorian Jason Pringle (Essendon, Vic) along with Gold Coasters Damian Ward and Brendan Nelson will line up in the DD2 category while Brent Coghlan will fly the Australian flag in the DD2 Master class.

The Rotax Max Challenge Grand Final will see a total of 264 competitors from 60 different nationals will competing. In a joint arrangement between the Australian Karting Association International Karting Distributors, the Association’s Media and Marketing Manager, Lee Hanatschek, will be attending this event to provide information and results on the Australian drivers.

All in all, November could see Australian kart racers stand on top of the podium in different corners of the globe all throughout November.