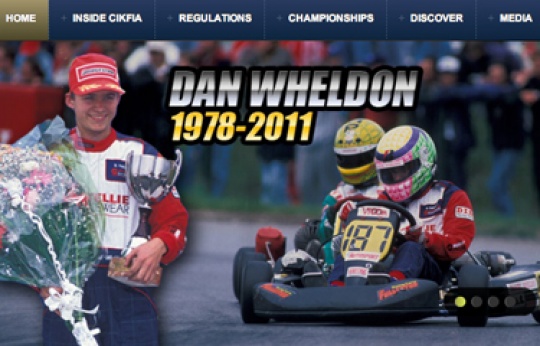 Having climbed the Karting ladder at the same time as Jenson Button and Anthony Davidson, Dan Wheldon belonged to that generation of great talents produced by the United Kingdom in the 1990’s. He passed away on Sunday 16 October as a result of a terrible accident that occurred at Las Vegas (USA) in the IndyCar Series.


Dan Wheldon came from a family that was fully invested in Karting, his father Clive being an amateur Driver and his mother Susie participating in the organisation of events as a lap charting officer. Dan was therefore naturally involved in competition from his youngest age, winning in particular three consecutive titles (1988, 1989 and 1990) of British Champion in the Cadets category, including one in 1989 against Button. At the wheel of a Wright chassis, Wheldon landed in 1992 the title of British B-Junior Champion. Advised by two of the biggest Champions “makers”, Mark Rose and Terry Fullerton, Wheldon competed at the fully international level for only one season but it was enough to mark the observers. It was in 1995: whereas he was challenging Drivers used to the greatest international competitions and acceding directly to Formula A after a brief stint in ICA in 1994, Wheldon (then driving a Fullerton-Rotax) stepped on the podium in the second European Championship round, at Salbris (FRA). Made confident by this excellent result, the Briton won the World Cup for Formula A at Suzuka (JPN) three weeks later and then got a double victory at the third round of the European Championship at Mariembourg (BEL)! He was fourth in the final classification of that European tour. A few weeks later, at Valence (FRA), he finished 11th in the CIK-FIA World Formula A Championship.

He had the opportunity of switching over to automobiles in 1996. After one season in Formula Vauxhall Jr and two in Formula Ford, he decided to expatriate himself to the United States for lack of the budgets required to keep on racing in Europe. Dan got perfectly integrated in that American Motor Sport sphere which is so different from the European one. Started in Formula Ford 2000, his American career followed a constant progression, with fruitful steps in Toyota Atlantic and Indy Lights before the big jump into IndyCar at the end of 2002. He got his maiden win in 2004 before his awesome 2005 season which saw him prevail at Indianapolis (Indy 500) and land the IndyCar title. A second Indianapolis win last May had enriched his brilliant list of results.
From his Karting years Wheldon had kept excellent memories, and he liked saying that Karting is the “purest form of Motor Sport”. And as a confirmation of this passion he had kept intact he regularly drove a kart for tests as well as in competitions. He recently participated in the final of the “WKA Sprint Series” at New Castle and was scheduled to run next month in the Super Nationals XV, also in Las Vegas.