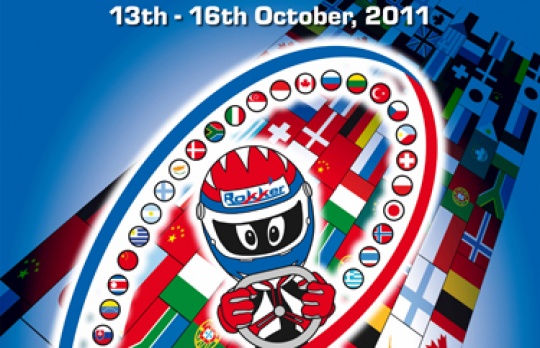 Ninth edition! The Rok Cup International Final will begin on October 14th for all Rokker passionate drivers and all eyes are now fixed on this interesting event full of news at the International South Garda Circuit.


About 300 drivers coming from all over the world, 34 Countries, will fight for the title of the Rok International.All national champions, winners of their country’s championship will run free of charge in the Rok Cup International Final’s competition.
On last year things partially changed due to rainy weather on Sunday. By the way some drivers proved to be wizard in the rain, the South African Orr, in Super category, the Swiss Aguiar, in Rok class and the Italian Zanchi in the Junior Rok category.  Mini Rok competition had a turn of events after the race, with the penalty given to Russo, in yellow flags, because of an unfair overtaking. The winner became the radiant Kevin Hansen, who had started from the very last rows at the starting grid.
RTA = THE TALENT IS AWARDED - This year young categories are the most prized, also thanks to the Rok Talent Award project. The two best Rok talented drivers will receive a fantastic prize, becoming official drivers competing in the next years’ European Championship and CIK-FIA World Cup of KF2 and KF3 categories. During the season many Rok drivers, aged between 13 and 17 years old (as provided by regulations)have attended the project running in their national Rok competitions. And now the most talented drivers have the chance to attend the very Final of the Rok races, which will be held in Lonato, and compete on next Monday, October 17th .
Who will be admitted to the final exam? The first three classified drivers, admitted to the Rok Talent Award project, for any category involved (Mini, Rok, Junior and Super).
ROK NATIONS CUP - The race assigning the title to the best National “team” is more and more engaging. Amongst the favourite Countries we have the South Africa, always well prepared in any category and champion in force in the Super Rok and Junior category.
Not to be undervalued is Italy, as well as Czech Republic and Poland, all full of talented drivers.
Some specific categories will also provide “outsider” drivers who will tell their story, too. Between them Argentina and Switzerland in the Super Rok, the American in the Mini category and Lithuanian in the Rok class. However, many surprises could also come as arrived in for the Mini Rok category last year under the rain.
ROK PARTY – It’s one of the most relaxing moments of the whole long week-end, the great Party, on Saturday night, under the dedicated tent in the paddock. Once more the Rok party will be the right moment for chattering and playing all together, before the winning Sunday races.
MEDIA – From years now, the Rok Cup has conquered the world karting scenario.  This is why we will have the most quoted press officers in this field and the very Final will be published on the most known karting magazines.
Telling the stories of the most valid Rokker drivers will be Yanek Sterzel (TKart Magazine) and Rob Howden (E-Karting News Magazine).
Amongst the most eccentric drivers is the “well known” Foulatier. The director of the French magazine KartMag will be on the track in the Super Rok category, as he did already in 2010.
SAFETY – Safety and security are fundamental in the Rok Cup. The track of Lonato will be entirely covered by cameras, a very precious support for the management of the race.  All technical committees is made by experienced personnel at International level. They will be guided by the CIK-FIA Technical Chief, Mr. Marcello Somera, supported by Mr. Mazzanti, Gamba and Rubino. Race will be directed by Mr. Roberto Noviello and Mr. Alessandro Ferrari (starter). Sporting committee will be represented by Mr. Di Bari, Mr. Ciresa and Mr. Mirabella.