What a fantastic issue to end the 2010! A truly superb creation with excellent content, great pictures, exclusive interviews, technical close ups, track test, and brilliant racing. Actually, the racing event of the Rotax international calendar! A special coverage of the 2010 Rotax Grand Finals, held in La Conca, Italy, to which we dedicate the cover, and much more. Discover the Rotax world in the exclusive December issue!

Karting, school of life
Awareness in seeing that over these past years, at least, national karting has seen some absurd deviations. Blows from left and right… The first who have felt these blows are the karters and then, as a consequence, more or less everybody else. From northern Europe down to Sicily; from the States round to Japan.
“Maddening” for everyone, whether it’s right or wrong, the thing is that nearly everyone would like to go back to living the sport as in the good old days, when you could see lots of drivers, full grids and all very determined, because they were all convinced that they would be able to show their skill and, especially their love for karting.
As it is true that times have changed, but the formula for karting is always the same, the same that 13 years ago convinced Rotax to set up the then revolutionary TaG, making people laugh because it was out of date. Today though, it is the rest of the karting world that has become anachronistic and the Rotax challenge is the one to follow.
The pleasure of racing in karts, compete on equal basis, spending the right sum of money, avoid ending up with racing stress that only means more expense and logically more lack of satisfaction, the same that influences the market negatively.
Despite everything, karting has given a lesson of life to all of us: those who have made mistakes, those who are sceptical, those who no longer believed in its social collocation...


RACE REPORT – 2010 Rotax Grand Finals
Another successful Rotax Grand Finals edition went in the books, with record participation, top racing action in the typical relaxed ambience of the most popular single-make trophy in the world. A real Italian Job for Rotax that has taken the Grand Finals to new heights, also thanks to well-selected, professional partners. 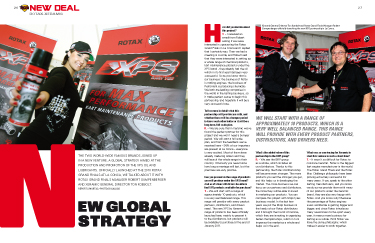 NEW DEAL – Rotax-Xeramic
The two world-wide famous brands joined up in a new venture, a global strategy aimed at the production and promotion of the XPS oil and lubricants. Officially launched at the 2010 Rotax Grand Finals at La Conca, we talked about it with Rotax Grand Finals Manager Robert Gumpenberger and Xeramic General Director Ton Koebolt.


TALKING TO – Garry Lobaugh
Not many people expected it, but it’s happened! Austrian engine manufacturer BRP Rotax opened a new phase in the USA by putting the distribution in the hands of experienced US businessman and owner of MRP Garry Lobaugh. Together with Michel Boisclair, owner of SRA Karting in Quebec, Canada, and Richard Boisclair, successful businessman new to the karting industry, Garry has created Max Speed, a new company that will be concerned exclusively with the Rotax US market.


TRACK TEST – Set up with PCR
What must you do when you find a dirty track with little grip and your kart is set up for a track with grip? Let’s see how the official team at PCR tackle this sort of situation at the7 Laghi circuit, with their driver Simo Puhakka and his SuperKF PCR-TM and follow step by step each adjustment carried out to improve set up.


CLOSE UP – PCR
With the official inauguration of the new site in Lodi, the re-entry phase into the karting world for a historic brand like PCR, ran by a volcanic Cesare Speranza, comes to an end. Obviously with some innovations for the coming season, starting from the chassis with its gold plated components.


NEWS - Vamec portable test bench
Among the latest proposals made by Vamec, in the field of accessories, is the new portable bench for testing chassis. At this point there is also hydraulic press, also portable and the new laser apparatus for checking the geometries 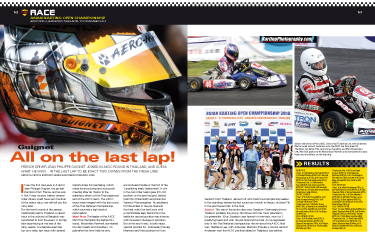 RACE REPORT – Asian Karting Open Championship Round 4
French driver Jean Philippe Guignet joined in AKOC round in Thailand, and guess what: he won… in the last lap. To be exact two curves from the finish line! 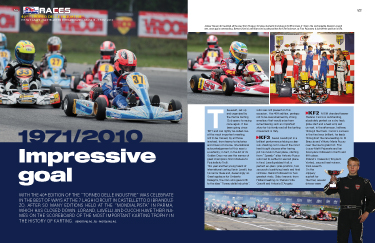 RACE REPORT – 40th Trofeo delle Industrie
With the 40th edition of the “Trofeo delle Industrie” was celebrate in the best of ways at the 7 Laghi Circuit in Castelletto di Branduzzo, after so many editions held at the “Mondialpista” in Parma, which has closed down. Lorandi, Lavelli and Cucco have their names on the scoreboard of the most important karting trophy in the history of karting.


S.O.S. KARTING – Security check
What to do before hitting the track. This month we are going to see what needs checking before you actually sit behind the steering wheel... 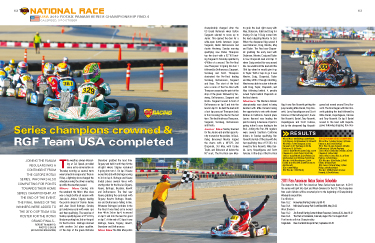 NATIONAL RACES
Before the Rotax Grand Finals, US drivers had been busy with the last round of the Rotax PanAm championship, which awarded the its titles and the final places for the world final in Italy. The same happened in Denmark, where the last Rotax event of the season sent the national single-make champions to contest for the world title. We also report from Germany, where the Graf Berghe von Trips Memorial was supported by the first Ciao Thomas Knopper Memorial for a truly exciting weekend. Portuguese champions were also crowned in Baltar, as well as the North and South Island Sprint champions in New Zealand... Are three discs really better than one?