Author: Vroomkart International
The first edition of the Vroom e-Kart Cup was a success! Gabriele Minì wins in front of Cristian Bertuca and Luca Bombardelli.
As we said a few days ago, the inability to race has tickled - or pickled - the minds of many, including ours. How can we go back to talking about races, get back to having some fun, take in the air of the paddock? In this sense, the great example of F1 came to our aid, transforming our competitions into equally hard-fought virtual races.

On Wednesday 8 April, our virtual competition (organized on the Play Station 4 platform with the F1 2019 simulation game), officially came to life. There were twenty drivers present among the protagonists of the current season, industry experts and some illustrious guests. A success in the numbers of people present during the live streaming, perfectly managed by the boys from the Milano Kart Championship, our partners for the event, and reported by the voice of Sky Sport, Edoardo Vercellesi, accompanied by our very own Andrea Giustini.

As in any race weekend we normally report on, here's how it went.

Qualification - Minì and Bertuca immediately in command
The formula of the race foresaw 15 minutes of qualifying on the winding track of the Red Bull Ring (Spielberg). In the quarter of an hour of attack against the stopwatch, all drivers pulled out their usual artillery, including the now former kart driver and neo-F4 driver, Gabriele Minì, immediately the leader with a time of 1.04.398. In second place, Birel Art driver Cristian Bertuca with a gap of five tenths from the top, Matteo Viganò (Charles Leclerc), Alex Irlando (Birel Art) and Giacomo Pollini (NGM Motorsport) close the top five.

Race – Amid the on-track brawl, excitement and unexpected events, Minì wins again!
After qualifying, 18 laps of fire were scheduled for the Final race on the Austrian track. After a great start, the formidable turn 1 reaped its victims, including Viganò who was forced to make a comeback. After a first regime of Virtual Safety Car, the race then resumed its course with the beautiful fight for the victory between Bertuca who slips past Minì with a malicious move, but then falls back behind his colleague. The award-winning duet will then go on to conclude the race with first and second places. Virtual race or not, the drivers certainly spared no effort, with many memorable clashes, such as the four-man battle between Matteo Viganò, Alex Irlando and the two representatives of the Rental world, Alessandro Orazi (VKT) and Matteo Somaschini (MKC). Also noteworthy, the various exchanges of position between Simone Corradengo (Vroom Kart) and Edoardo Orazi (VKT), Max Polli (MKC) and Giacomo Pollini (NGM Motorsport), Tom Braeken, Stan Pex (SP Motorsport) and Pepe Martì (FA). Worthy of applause, the internal struggle between driver and mechanic, namely Massimo Dante (Maranello Kart) and Luca Bombardelli (Maranello Kart). The latter put together - along with Vincent Franken (FM-IMAGES) - the comebacks of the race by starting respectively from P8 and P11 to then finish in P3 and P4, taking also advantage of the penalties of drivers in front. 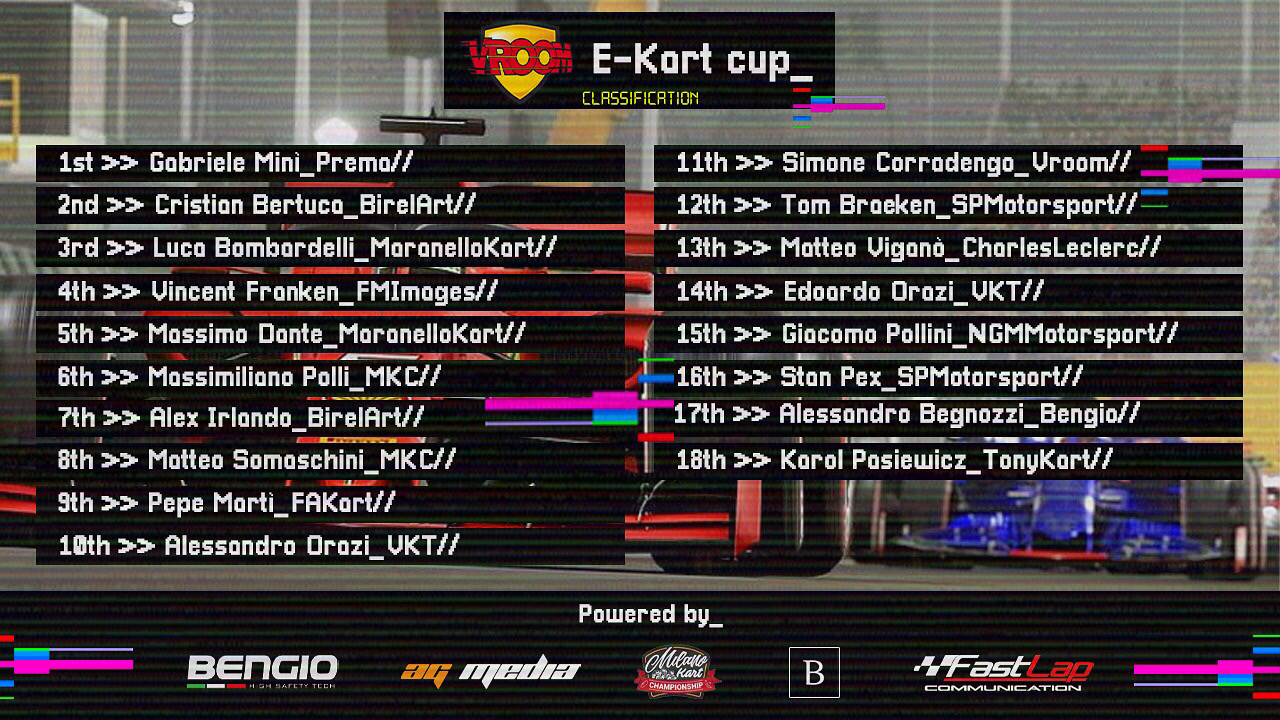 To celebrate, we'd also like to point that Alessandro Begnozzi of Bengio HST, partner and driver of the event with his great P7 in qualifying, awarded Minì the prize, that is, a free gift voucher for Bengio products.

The full race will be visible again in full format on our YouTube channel shortly!

Here are the words of the organizer, Simone Corradengo (Vroom Kart):
"It was a new experience for all of us. Usually we report the races but not as organizers. The event was successful and we'ree sure that everyone who had the opportunity to watch are of the same opinion. Thanks a lot to all those who supported us and spent at least one hour of these difficult days with us; the intent was primarily to entertain and keep each other company. I'd also like to thank all the drivers who have proven to be professionals in the virtual field, too, and my travel companions Edoardo Vercellesi (Sky Sport), Andrea Giustini and all the Milano Kart Championship people starting with Daniele Grigolo and Stefano Maviglia. We already have a sequel to this event in mind, so keep following us ... from home!"
Vroom Karting Magazine
Graphics: Filippo Bossetti (event partner)