Author: Vroomkart International
The season's first trophy goes on record with the victories of Barnard (OK), Spina (OKJ) and Khavalkin (60 Mini).
On the final day of the Champions Cup, the fight for victory returns centerstage in the three categories of the day with yesterday for the heats, leaving today for the prefinals and finals.

OK – Barnard, great start
Taylor Barnard is on pace right from the start, ending the weekend on top. The young promise of Rosberg Racing starts off big by winning the pre-final and guaranteeing himself pole position for the very final in Senior. Barnard had to do nothing but manage the start of the race in the best possible way and then flee alone to success with more than four seconds ahead of the competition- easier said than done, of course. Good race also for Kirill Smal, the new spearhead of Energy Corse, able to gain six positions, finishing in second place overall. Third the re-entering Senior, Harry Thompson for Sauber Racing; to complete the first top five were Nikita Bedrin (Ward Racing) in fourth, and Matheus Morgatto (Parolin) in fifth, the latter master of the best comeback in the top ten with 21 passes to his credit. Worth noting is the exclusion from the order of arrival for Martí Sobrepera (KR), due to the final weight. The Spanish was at his first race with FA Karting School team and he showed a very good pace that allowed him to recover from the 9th position of the starting grid to the 2nd step of the podium. Penalty for Ten Brinke (RFM) and Camara (Forza Racing), previously in the top ten and then demoted to eleventh and fourteenth places. 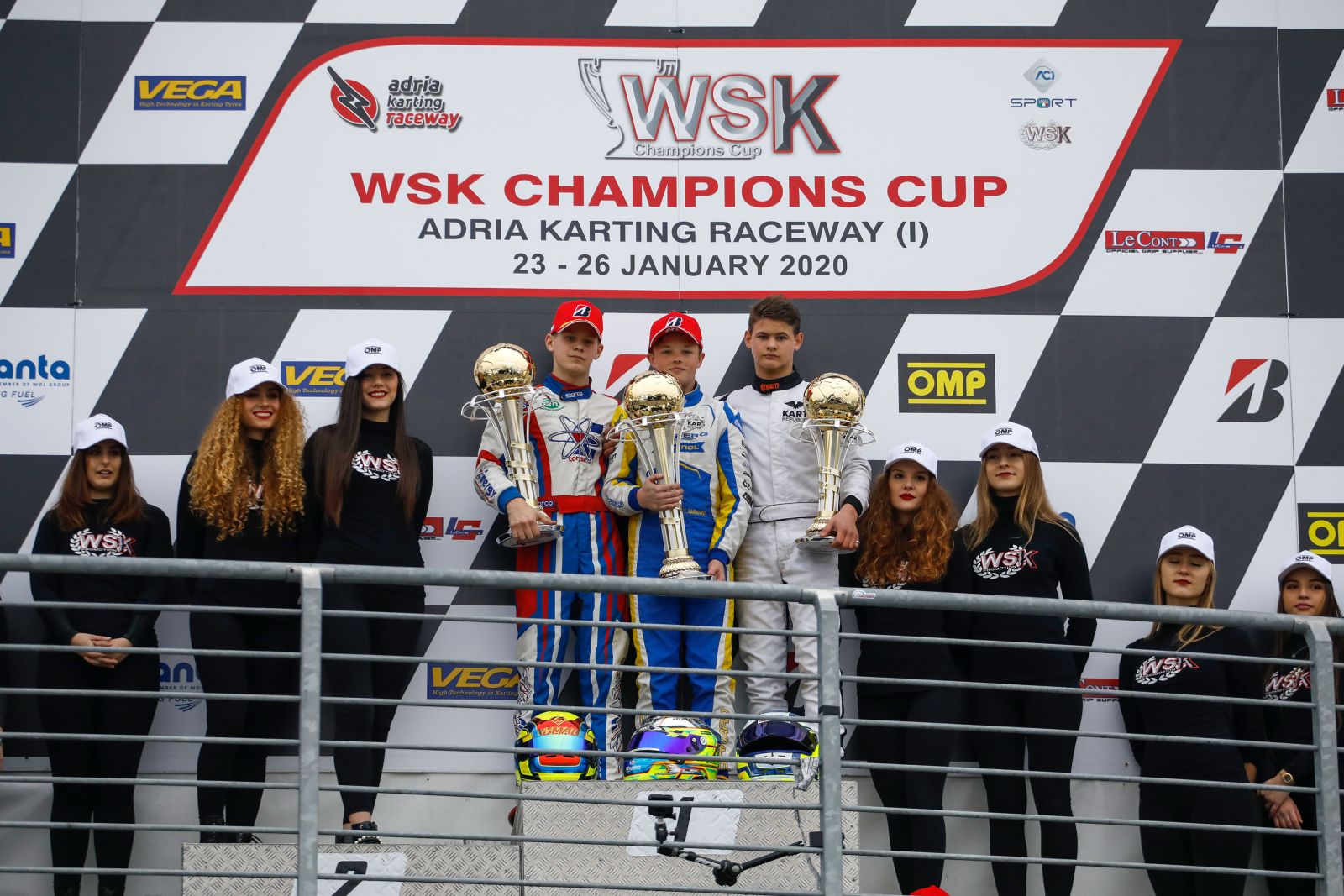 OKJ – Spina Show
The Junior starts with a bang giving a heart-pounding final from start to finish. After the successes of Lidblad and Stenshorne in the pre-final, in the final 16 laps everything changes from the start. With a manual-worthy maneuver in counter-steering, Alfio Spina (KR) immediately takes command of the race, except then having to deal with Ugo Ugochukwu (RFM), before retiring from the race. The American attacks Spina on the inside during the seventh lap, momentarily making a bid towards success. It will then be Spina again to set matters straight by taking the lead back right to the end of the race and the checkered flag. A deserved victory for the Sicilian who opens the season in the best possible fashion. Second position for Rosberg Racing man, Martinius Stenshorne, a top contender the whole weekend, third place surprisingly for Cristian Ho (Sauber Karting Team) with nine positions gained. Top five completed by Artem Severiukhin (Ward Racing) and Arvid Lindblad (KR), at times a pretender to the final success.

60 Mini - Russian 1-2
The 60 Mini speaks increasingly more Russian with the new interpreters of the category close to scoring a hat-trick. Matvev (Energy) and Khavalkin (Parolin) win the pre-finals and then postpone the battle to the decisive race. After well managing the starting phases, Khavalkin had no problem managing to finish alone with seven tenths of a gap over compatriot Skulanov (Formula K), author of eleven overtakes. Third position to Al Dhaheri (Parolin), fourth Matveev and fifth the Polish Przyrowsky (AV racing). 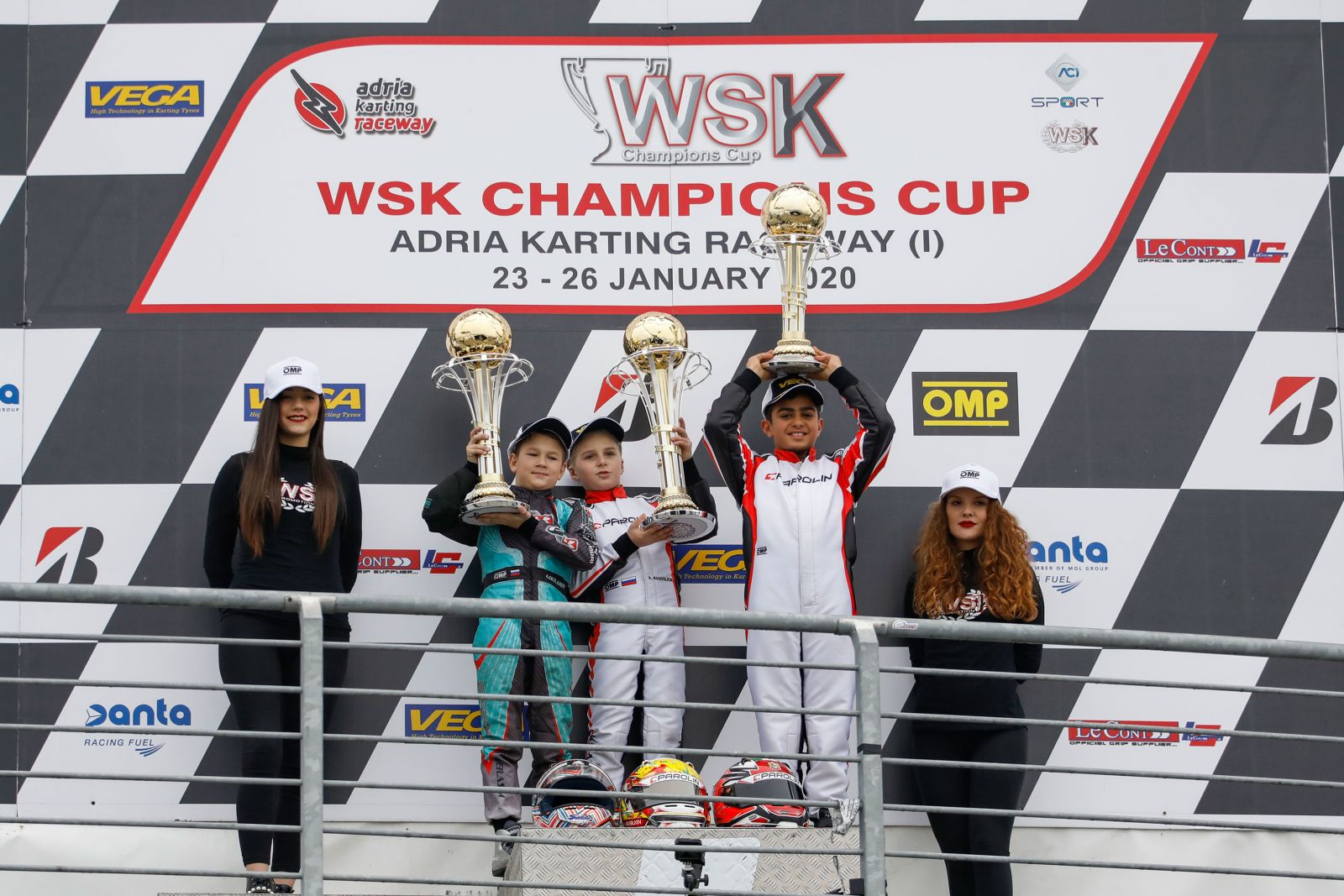